Just when you thought it was safe to go outside

I almost got run over today.

I was out with The Budster for our morning constitutional. He'd finished his business, so I sat for a bit on the bench in the children's playground at the end of our street. He nosed about nibbling on the grass while I enjoyed a bit of sun on my face, the only bit of my flesh exposed to the air as it is now below zero. I left the playground and started to cross the street to go home. Bearing in mind that Quebec drivers are notoriously irresponsible drivers, I watched as a car approached going at least twice the posted speed limit.

No problem, since the driver had a) a large stop sign, b) plenty of time to stop, c) a giant speed bump and, d) a pedestrian with the right of way, clearly visible in a puffy down-filled coat holding a bouncy dog on a leash.

But the woman at the wheel simply ignored the sign, the speed bump, me and the dog as she plowed right through, not even slowing down to make a pretense of stopping. I took a couple of steps back and almost tumbled into the ditch, then waved my fists in the air and yelled a "hey, hey, hey!" in the middle of the street (that'll show her!)

I figured she would just disappear down the road, but...she pulled right into a driveway about halfway up.

So what do you think I did? Yup. I jogged up the street and caught the passenger, a middle-aged woman, as she was going into the house right behind the driver.

"Uh, excuse me," I called from the street, deliberately keeping my voice level. "You guys almost ran me over back there. Did you even see the stop sign?" Note that this was a rhetorical question, since they live on this street and therefore must know it is there, and always has been there.

"See?" the passenger calls into the house to the driver hiding in there. "I told you that was bad. You could get a ticket!" She looked at me. "I told her she could have gotten a ticket."

A ticket? You're worried she'll get a ticket? "Uh, this was right beside a playground. You could have killed someone. It's not about her getting a ticket. That was dangerous what just happened back there."

And with that, she went in without another word and closed the door. No apology. Nada.

1. What would you have done?

2. If I happen to come across a dead skunk, what should I do with it?

It also explains why we have signs like this here in La Belle Province: 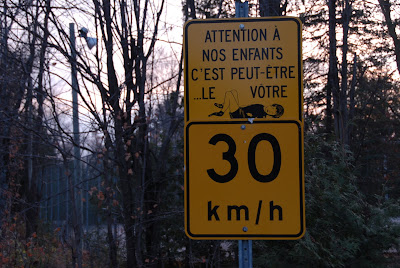 "Keep an eye on your kids. This might be yours." 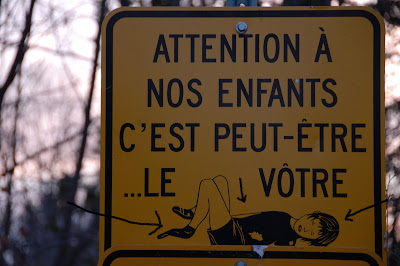 Eek! Glad to hear you're okay. This place is ridiculous. How many kids do need to be run over before people wise up?

That sign actually shocked me. We have the innocuous silhouettes. However detailed your signs are, they still don't seem to work. I know what I'd do w/ the dead skunk, even if I had to go hunting myself. Mostly, what I would do is call the police. Really. Have a occifer of the law show up on their porch. He'd probably enjoy hearing the Frick and Frack routine. "See, I told you that was bad." Un-be-leeeeeeevable!

Hey! That's Leah's favourite sign from your cottage roads. That's how we know we're getting closer...."Hey Mom! There's the dead child ahead sign!". I know...sick.

I love that you chased that stupid woman down.

Pity you didn't have the road kill in hand when you approached "hot nuts".
Could have made your point about her "skunky" driving.
KDTR

Maybe I'll return dressed in my roadkill costume from Hallowe'en.

Are you SERIOUS?!!! You dressed up as roadkill for Halloween? WE NEED PICTURES!!!

I deleted them by accident from my camera. In that, I transferred them to my laptop and said "yes" when asked "would you like to delete these from your camera?" First time I've done that and I lost them. And my shots of Pennsylvania. But Kathy Down the Road has a couple. (It's not pretty. It's really roadkill.)