How Hard Can it Be To Cook A Squid?

Now that I'm living in the city, I have decided to be more adventurous, to take more risks, to step boldly out of the box.

I popped in the local grocery store to buy chicken breasts, and after chatting with a woman from Senegal who praised the benefits of seafood, I walked out with a package of fresh squid.

Not having prepared squid before, I turned to the internet.

How hard could it be to prepare and cook a squid?

I knew I was in trouble when I read "first cut through the arms near the eyes."

I'm sorry, the what now?

"Then," it continues, "with your thumb and forefinger" (seriously?) "squeeze out the inedible beak."

Sweet Moses on a cracker.

"Feel inside the mantle" whatever that is "for the chitinous pen." Ditto.

I look up mantle. "A loose sleeveless garment." Nope. "A figurative cloak." Nope. "A soft external body wall that lines the test or shell of a tunicate..." Sounds about right.

Now that I know what a chitinous pen inside a mantle is, I look up what I'm supposed to do with it.

"Firmly grasp the pen and attached viscera and twist it from mantle." Okay, I don't even have to look up viscera to know it's nasty, and I would imagine squid viscera is especially so.

I regret ever meeting that woman from Senegal. Damn her and her persuasive squid sales pitch.

"Wash and drain the mantle, which you can now stuff. Arms can be minced, chopped up or left whole."

I am encouraged to harvest the squid ink from the ink sac, a thin and silvery beauty nestled in the innards, by puncturing the ink sac and squeezing it into a small bowl. I am advised I won't get much ink, but "a little goes a long way." If I find myself wanting more (as if) "small deposits of ink can be found behind the eyes."


Update:  When I opened the package of fresh squid, I was beyond delighted to see it was already relieved of its chitinous pen and was as clean as a nun's whistle. Yippee. Game on.


Update #2: Despite the fact that every time I walked by the bowl of raw squid I flinched, I breaded it, fried it and watched the miracle of conversion from a chitinous hot mess into calamari. A Most Excellent Meal was had by all. And by all, I mean me and Doug. 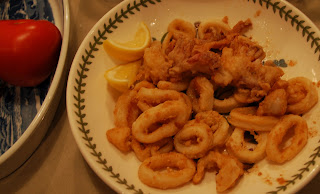 yes, I know I'm not a food photographer...check out the squid arms which I decided to leave whole, as the idea of chopping them up hit a ten on the squeamish-o-meter

Update #3: I tossed and turned all night, and dreamed that I was diving off the coast of Portugal (why Portugal??) and a giant squid grabbed me by my legs and pulled me down into the dark ocean waters to a depth no human could survive. However, this being my dream, I fought back with a knife conveniently strapped to my leg. As my mask cracked and threatened to implode, I stabbed the giant squid's arms (which I now know are located near its eyes and can be minced, chopped up or left whole) then inflated my BCD (buoyancy control device) and rose to the surface with enough lifeless squid arm meat to feed an army.

Note to self: no more squid before bed.

Update #4, and the last one, I promise. Holy Calamari Batman, this really happened to a diver! Read about it here.
Posted by A Novel Woman at 9:50 AM

Dave cooks squid all the time. I'm not a fan though - I can't get past the tentacles thing . He had squid in San Francisco, our last night there, and said it was the best he'd ever had. Ever. It looked like a giant chicken breast - can you imagine the size of that sucker pre chop up??

When I had the time, years ago, I was a great fan of trying new things. I once made octopus. I spent a lot of time studying recipes (this was pre-internet). I picked one, and boldly went where this woman had never gone before. It turned out rubbery and inedible, and the cat sniffed at a morsel held out to him and then backed away. I wonder if it would have been different had it been fresh and not frozen. PS: I figured out what the chitinous pen was right away. Chitin is the cartilage that fingernails are made of. Squid have ink. I figured the chitinous pen had to be the 'ink well' of the thing. Question: what did they suggest you do w/ the ink? Just curious. Because you're a writer, and Christmas card season is just around the corner. "Merry Christmas! This ink is a natural product harvested from a squid I cooked and ate. PS Happy New Year too.

That would be a memorable Christmas card, NW.

Debby, squid will be tough if you overcook it. It only takes minutes. Or, you can cook it for a long, long time (i.e., simmer it in a sauce.) Otherwise, it will be tough.

Thank you for the ink suggestion. Maybe I should go whole hog and use the chitinous pen to write with too?

As for the ink, you eat it. It's a delicacy in Italy. Youngest did exactly that whilst in Venice last May. She said it was most excellent. I shall take her at her word.

By the way, my garbage can smelled like a cat curled up under there and died last June.

Lord help us if you ever decide to make a bad first impression.

Off to go see.

I'm getting a bit fed up with Blogger and may switch to WordPress.

In the Philippines squid is cooked by placing the critter in a pot of boiling water and letting it cook. After awhile, the squid's ink turns the water black. When the squid is ready to serve, the view is squid tentacles sticking out of the very black water like small uncoiled hoses. I tried most of the native dishes while there, but squid was one I didn't try. The dish you prepared looked like something I would like.

kc, you are sick, sick, SICK! At first I thought it was an animation, but it's a VIDEO of a real squid whose name translates literally as "the squid from Hell."

I couldn't read past the sentence which includes the phrase " a delightful recipe of corpses and faeces washed down with its own mucus."

I want to scrub my brain with Comet.

Franklin, you got through! Tentacles poking out of black inky water doesn't sound very appealing to me either. In fact, every time I walked by the bowl of raw squid I jumped, because one of the loose tentacles sitting on a paper towel looked like a worm.

I'll tell you what's worse, though. Finding a flat piece of raw squid stuck under the rubber mat in the sink the next day. The smell was overwhelming.

i just HAD to leave a comment! I cooked squid (for the countless) time tonight but realized... i don't know much about it. So i googled. Only because i FOUND A WHOLE FISH IN MY RAW SQUID JUST NOW. You must just imagine how i was screaming about my kitchen having to remove all these raw sea parts...