I'm midway through this project, feeling pretty chuffed about it as the colours put me in mind of Easter which is my target date for finishing the thing. And this yarn is special. I scooped the last three handspun, hand-dyed skeins on eBay. So it's special stuff. I can't just run down to the wool shop and get more. It's a limited edition, one might say.

Are you picking up on the subtle foreshadowing here? 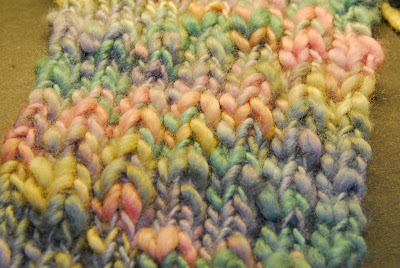 I set it aside on the dining room table to "keep it safe" between sessions. And it should have been safe because my cats know they are not allowed on the table. Never, ever. In theory. 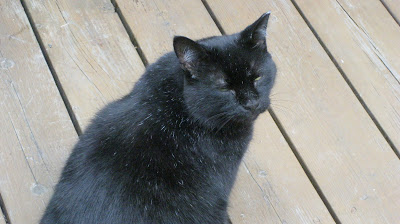 And This, well, This Boris just doesn't believe in rules. Rules are for other cats, oh, and the dog who is too stupid to live, and perhaps small humans.

Unfortunately Boris is also a consummate glutton saddled with the constitution of a weak old woman, a crotchety binge-eater who can't make the connection between his behavior and natural consequences. If one eats a partly rotted mouse, it will reappear on the front hall carpet. If one insists on eating an entire bird - feathers, beak and feet included - it will end up as a sort of sparrow tartar mounded on the front step like some grotesque art piece. But the dots are never connected in his tiny cat brain.

Because Boris also refuses to abide by any of the rules of the house, he not only gorged himself on a new food, a particularly pungent mixture which contains a lot of fish and fish oils designed to give him the shiny coat of a kitten, but he then climbed on the dining room table in order to digest it from a better vantage point. Unfortunately, he made himself comfortable on my unfinished scarf, and moments later, gacked up his entire fishy breakfast all over it. In the process, which involves simultaneous spewing and backing up as though the vomiting is something he can escape from, he managed to hit not only the scarf in progress, but also the giant ball of yarn, soaking both with fishy chunks and gooey strings of saliva. Ever tried cleaning a fat, fuzzy ball of yarn?

The question remains, do I wipe it off as best I can and keep on knitting then give it a thorough wash after I'm finished, or do I strangle the cat and call it a day? 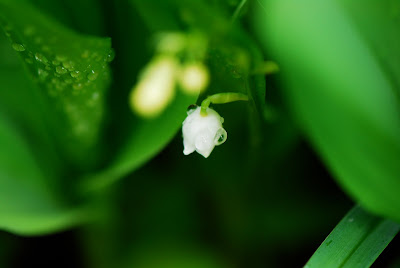 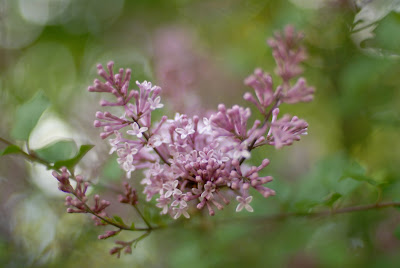 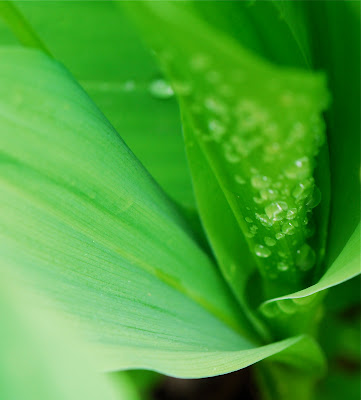 Oh, Pam! I'm so sorry! Laughing hysterically because my cat must be Boris's evil twin, but still, so sorry...

Um...I'm not sure I wouldn't just bite the bullet and replace the yarn when I could. The thought of trying to clean it makes me cringe.

But, on a good note, those are some beautiful shots of spring plants! :o)

Quick: What is the fiber content of your yarn? I know you are fond of baby alpaca and blue leicester. If you used 100% sheep wool, I'd get a bottle of this stuff called Soak from the yarn shop. You could then soak the scarf in cold water and let it air dry and that might do the trick. Soak gets stinky socks clean, etc. I love it. Don't use hot water or else it might felt up a bit.

For the ball of yarn, I'd unravel the vomity parts and see about soaking them as well.

I feel confident you can remedy this. If you can't, let me know the name of your yarn and I can look for it here, because I have access to FIVE yarn shops and would be delighted to look for it.

Mojo destroyed a ball of novelty yarn but hasn't touched anything since. However, he is quite interested in alpaca--he must be able to smell the animal.

Anonymous, I suspect you may in fact be my husband and as we have discussed many, many times, this is not an option, although I am sorely tempted.

NM, so what you're telling me is that this scarf shouldn't be a gift to someone?

LG, it's the slubby Blue face Leicester, so 100% wool. I'm thinking I'm going to unravel the vomity bits like you said, and keep knitting, then wash the dang thing. I'll look for this SOAK stuff. It's an excuse to go back to the yarn store!

Oh, my sides ache from laughing! :o) Poor you!

I surrendered all thoughts of knitting and crocheting, finally. My cat, Fox, sabotaged any and all of my efforts through chewing, eating, tangling, gakking, terrorizing, etc.

So, then I tried making dreamcatchers. Same thing, with the added attraction of playing with the hoops, getting a small one caught around his neck, and eating and pooping out beads.

I am now retired from all craftiness due to cat interference.

Oh my gosh. I'm howling over here. Too darn funny. Let us know what you do....

I'm not stopping now. I've come too far to let a little cat barf stop me. Off to buy some SOAK, and after I finish washing the yarn, I'm going to drown the....no, I won't. But I'm thinking about it.

Hope the SOAK works!
As a cat person, and I must be at least 1% crazy cat lady to suggest this, but I actually thought you were going to post a photo of the spoiled wool...

Deniz, I thought about it so great minds think alike, I guess.

Are you going to "SOAK" the cat? Oh please....pretty please!
Or knit something and make ole Boris wear it.

The only way I could "SOAK" Boris would be to administer some strong anesthetic first. Ditto dressing him up in anything, even a collar.

Boris once sniffed around a plastic grocery bag and somehow got the handle caught around his neck. Between the sensation and the noise, he wigged out and ran headlong into the wall and landed on his furry butt, dazed and confused. I thought Doug was going to hurt an internal organ he was laughing so hard.

You know, the blog may be the party, but the comment section is the virtual kitchen where the real conversations take place!

I would definitely try washing and finishing the project. It would be a crime to waste good yarn. I'm guessing that with spring coming, the cats are getting rid of excess fur. Do you feed Boris hairball formula? My cats don't yak nearly as often as they used to and I attribute it to the Iams Hairball fiormula. Only one of my three cats still yaks frequently and that's just because he's too young and greedy and eats too fast.

I think you can even still gift it if you wash it and don't tell the giftee. Almost all of my knitted gifts have cat hair knitted into them.

I've done that!
I've had to lock myself in a room away from the cats, lay out the knitted item on a near cat-hair-free surface and pick the hairs off it one by one until it was presentable enough :-)
Someday, I'd still like to try spinning pet hair...
(word verification: swinful
sounds so jaunty!)

Julie, it's not a hairball. Boris is old, greedy and eats too fast. If I try to restrict him, he goes outside, catches mice and birds and squirrels with the same result - he eats fast and yaks THEM up. I'd rather handle a bit of kibble now and again.

Deniz, there are spinners and weavers in my (former) guild who regularly work with cat and dog fibre. It's all well and good until you get caught in the rain. Doesn't matter how thoroughly you wash it, you WILL smell like a wet dog at some point.

I have yet to find a reliable way to get cat urp out of nonwashable fabric, in all the years we've had cats. The person who invents a product that will do the job will make an instant fortune.