A contest worth entering and an interview worth reading 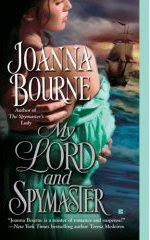 Susan Adrian (see link at right) has an interview with Joanna Bourne, author extraordinaire and mentor to so many of us in the Compuserve writers forum.

So stop reading my blog and beetle on over to Susan's for a chance to win Jo's latest book MY LORD AND SPYMASTER. I haven't read it yet (she said, rubbing her hands in anticipation) but Jo's last novel THE SPYMASTER'S LADY got great reviews. It was certainly one of the best novels I've read in a very long time. And people like Nora Roberts agree with me, so it must be true.

My summer at the cottage is about to officially begin, so you'll be seeing a little less of me here, and my photos will be more on the "wild" side. 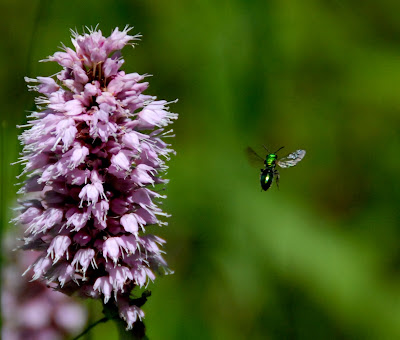 I usually get up early when I'm at the lake, which is highly unusual for me, as I'm not a morning person. But the sun comes screaming into the windows around 5:30 a.m., and the light is perfect for photographs, so I can't resist. 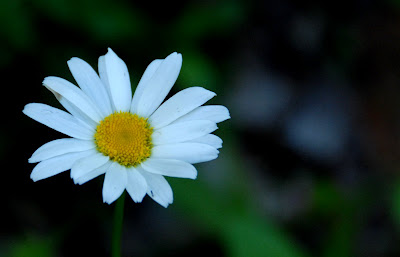 I like to take the kayak out, with Buddy stuffed in the hatch, since he hates to be left behind and will chew up papers or Kleenex or underwear in protest. 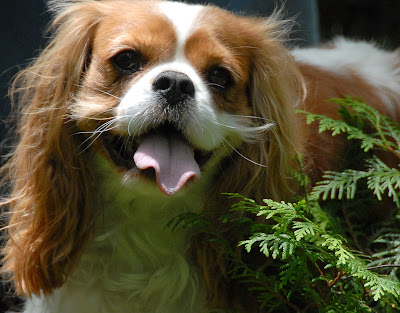 I'll paddle slowly around the point to watch the sun rise over a lake as flat as a mirror. Sometimes, in the heat of the summer, the cold water creates a pink mist rolling on down to Black Bay. It's interrupted with the odd heron or a trout leaping out of the water, or a mother loon carrying her babies on her back. We have a resident kingfisher who pretty much ignores me while he dives for fish a few feet away from the dock. If I can capture a good shot of him, I'll be in like flint at the photography club I just joined. Seems one gets bonus points for capturing elusive birds, and the kingfisher is a notoriously difficult one. Who knew? 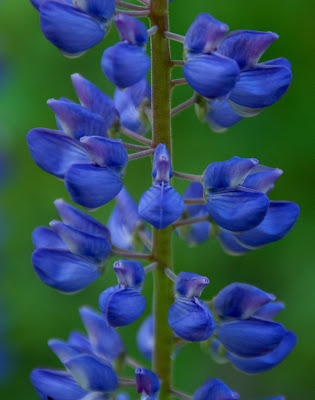 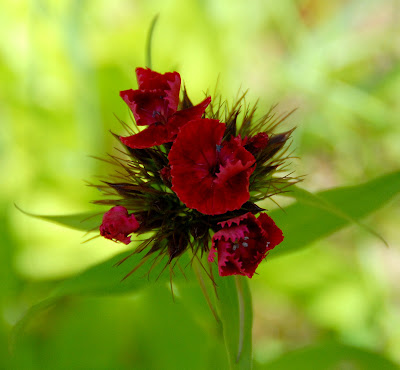 Our summers are so short and fleeting here in the Great White North that I soak in every bit, as though every day is my last, and I give thanks daily in gratitude. I normally take a long morning walk on our country road, but there's a bear hanging around and we have a huge raspberry patch on our property, so I'm a bit nervous this year. However, I can always sing as I walk, a guarantee to send any bears running for cover. After my walk, I come back sweaty and dusty, so I like to jump into the lake to cool off, sometimes with my clothes still on, sometimes - if there are no guests or fishermen lurking about - with my clothes flung off in the bushes. Then it's reading, board games till the wee hours, or if I'm alone, I'll write for hours. 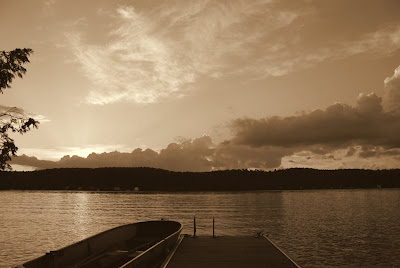 And this is what I'll be looking at: 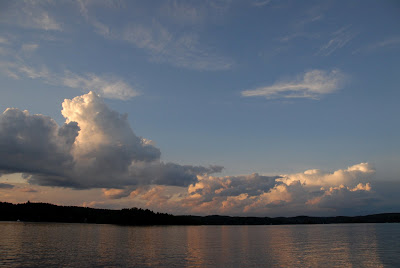 I'll be in touch. Honest. If you don't see as much of me, it's because I'm out fishing. 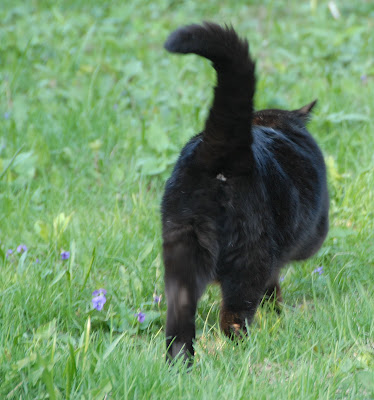 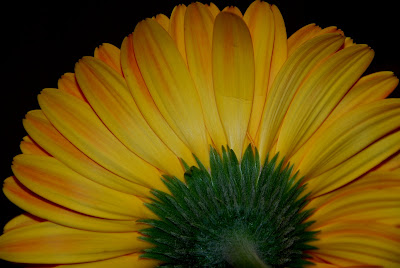 Did you miss me? I've been in Toronto at my sister Lisa's house. This trip was to celebrate my mom's 75th, our sister Brenda's 50th, my niece's graduation from primary school, and Father's Day. Fate had other plans. My mom fell over a toolbox the night before the big day and broke her elbow and upper arm, so instead of a leisurely brunch, my two sisters and I beetled off to the hospital. Father's Day was a wine bottle hand off in the hospital parking lot. My niece had fun, though it was difficult to get her to stop laughing and pose properly for a portrait. It might have had something to do with her auntie mooning her. 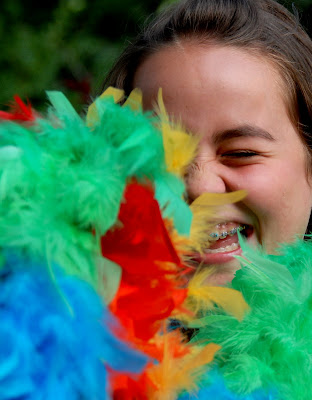 Half-a-century-old sister Brenda then left to drive home, and phoned ten minutes later in a panic saying she was in a tornado. She knows whereof she speaks, since a twister destroyed her home in 1984 WHILE SHE WAS IN IT. After much screaming and hyperventilating on the phone (from both sides) she outran the storm and survived, but now I've renamed her Dorothy aka The Tornado Magnet.

I had a marvelous time, despite all the drama (we also managed to flood my sister's upstairs toilet and her coffee machine in a 12 hour period.) My sister Lisa is an antiques dealer, so we attended a couple of auctions out in the country. The items at the second auction weren't worth staying for, more garage sale than antique sale, but the people watching more than made up for it. There was a preponderance of ample-bottomed women who looked like they packed their own portable bean bag chairs in their pants. (Not that I'm a lightweight by a long stretch, but I probably look like I'm hiding, say, a small bolster for a twin bed, or perhaps a couple of small ottomans, at most.) Then there was the star of the show, whom I'll call Luba.

Luba, who weighs maybe ninety pounds after a big meal, is a regular, and a thorn in my sister's side since Luba and her partner show up for the same auctions, bidding on the stuff my sister wants without actually buying it, thus driving the prices up along with my sister's blood pressure. Luba and her partner favour Cat Rescue tee-shirts, large round eyeglasses from the eighties, and ponytails so tight they can't blink without straining. While Luba is tall and thin, her partner is short and stout.

Luba's modus operandi is to constantly weave in and cut through the crowd to see what the auctioneer has in his hands. She'd grab a Player's cigarette from the packet shoved into the front pocket of her jeans and yell out to her partner did she want a Blue Mountain swan bowl for a buck, what about a bucket of driveway sealer, or how 'bout some of them punch glasses but one's missin' a handle, eh? Her partner, who never wavered from her position in front of the donut table at the back, would grunt approval or shake her head, but it didn't seem to matter, as it soon became apparent to all - what Luba wants, Luba gets. She lurched back and forth with cracked bowls, ceramic elephants missing their trunks, alabaster ashtrays....

Caught up in auction fever, I got into a heated bidding war and ended up the proud owner of a box of roller blinds for two dollars. Never mind they were odd sizes that fit none of my windows, or that they were dated and discoloured from being stored in a garage for 50 years, or that they didn't even come with the hardware needed to install them. Victory is mine, ah HA!

My sisters then flew to Vegas, leaving me to drive home and explain to my husband why I have a trunk full of fringed, beige roller blinds. 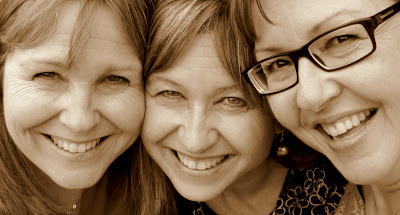 Ah, yes, the poppies have arrived

Does anyone else hear the Wicked Witch of the West's voice when they say, "poppies, poppppies" or is that just me?

First you get the tight little buds. 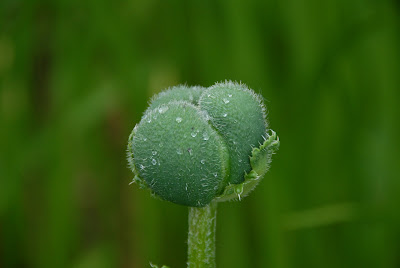 Then they start to open up just a leeeetle bit: 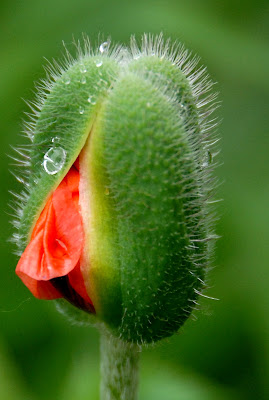 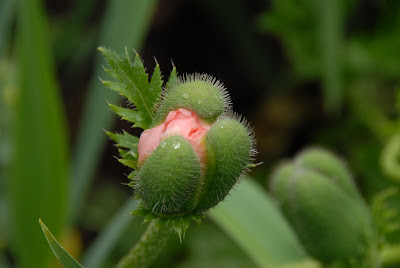 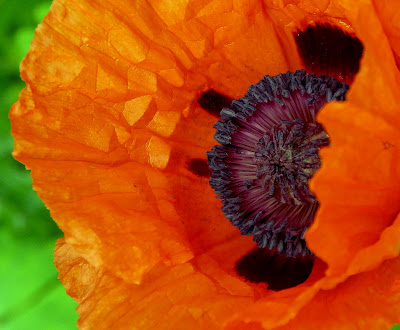 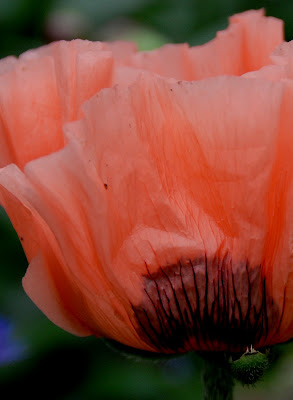 Oh, baby, how I love poppies: 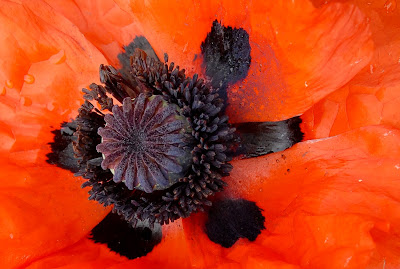 But wait. Look what's coming up next week: 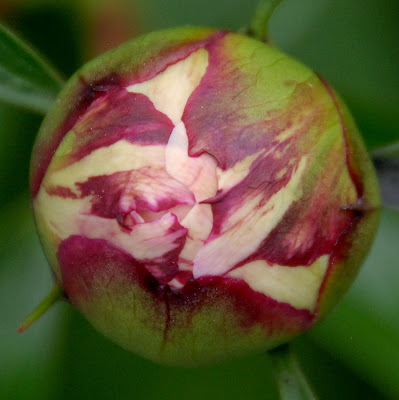 My daughter works as an assistant gardener for my friend and neighbour K., who is the woman behind all those gorgeous flower photos. (And by "gorgeous" I mean the flowers not my photos.) So every morning, K. greets my daughter with a fresh cup of coffee, made from freshly ground coffee beans (handpicked by fairies in the mountains of some mythical place with more vowels than consonants, I'm guessing, because it's THAT good.) She used to make muffins and cookies every day until my daughter protested, saying she was going to meet up with her boyfriend in the south of France later this summer and she wouldn't be able to face him after a summer of K.'s baked goods. Yes, they are that good. (See fairies above.)

So K. now gives her a bag of special, healthy trail mix consisting of dried fruits and berries, nuts, seeds, chocolate disks (yeah baby) and most specially, these little dried figs. Now my daughter doesn't always finish her bag of trail mix and so she brings the leftovers home. I've studied these little bags 'o treats and while they're quite tasty, the figs in particular are quite arresting. Take a look at this little fig and pine nuts combo (it's only an inch high) and tell me it doesn't look like a little alien. 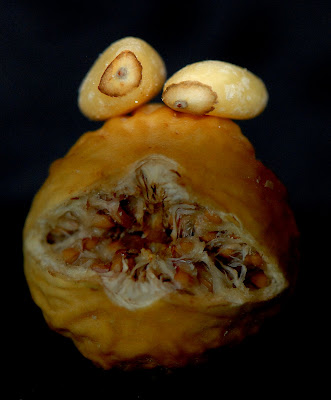 This is for Donna Boucher aka Miz Booshay who was asking about pasta salad recipes. Donna is a photographer extraordinaire and just all round nice gal. I love her blog, if you haven't been by, do go see her wonderful photos.

Pasta Salad
(adapted from Susan Branch, I think it's in her Summer book)

Cook pasta until al dente (the rotini usually takes me 13 minutes) and drain. Put in large bowl and set aside. I use one of those pasta pots that has a built-in drainer, so I can leave the pasta water for blanching the veggies. If you don't have one of those, either scoop the pasta out of the water quickly, or put another pot on to boil.

Pour oil in saucepan and cook garlic over LOW heat. You do not want to brown the garlic or cook it very long as it turns bitter. I suppose you could also cook it in the microwave, as it doesn't take very long, under a minute as I recall. Set aside to cool.

Lightly blanch the broccoli and snow peas for only 1 1/2 minutes. Remove and immediately plunge under cold water to stop cooking. You can use any veggies you want - zucchini, green beans, anything. Just don't cook them longer than a minute or two. Drain the veggies.

Toss the pasta with the oil/garlic mixture. Add the blanched veggies, the other veggies and the cheese. Toss. Lick fingers. Repeat.

It makes enough to feed a crowd.
Posted by A Novel Woman at 10:36 AM 8 comments:

Today is bearded iris day, which I totally made up a few mintues ago. But there should be one. What beautiful, odd flowers, almost like tissue paper, in so many colours, like pale blue: 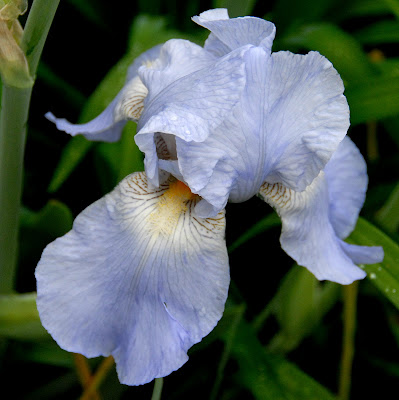 Medium blue (and it really is that colour. I didn't modify it): 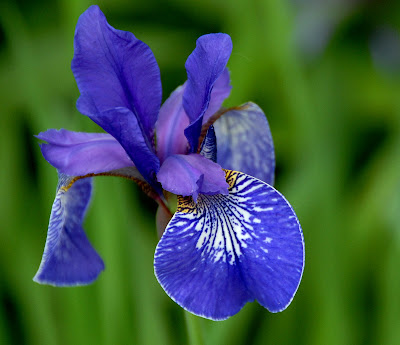 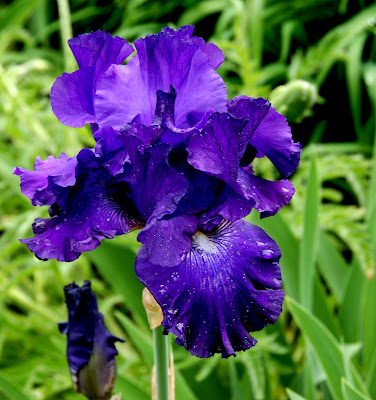 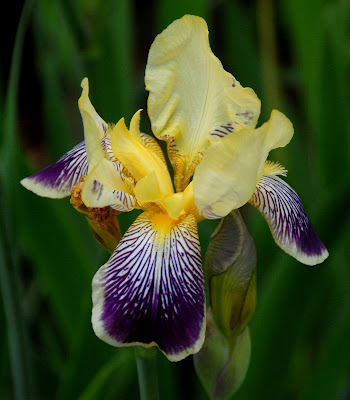 This lovely, faded beauty that reminds me of French silk for some reason. Can't you picture these colours in a haute couture gown? 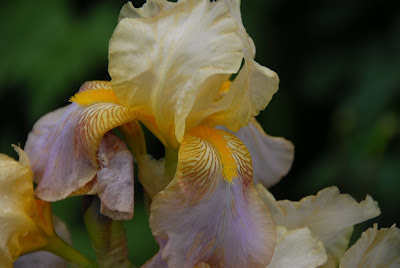 Actually, they kind of remind me of tongues. 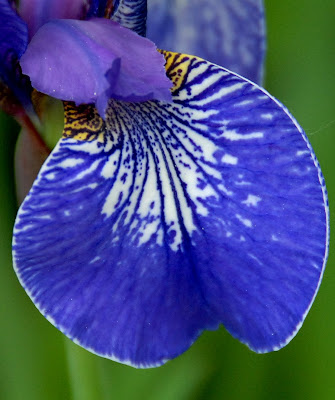 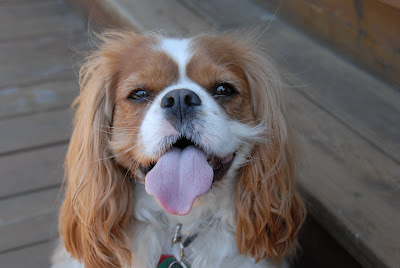