A Bit of Christmas

Some of you know my friend who signs on as "Kathy Down The Road" or just KDTR in the comments section. Since we moved downtown, my friend and neighbour of twenty-four years is no longer "down the road" except in spirit.

My daughters have tended Kathy's garden for years, which was great for me, because it allowed me to photograph the results of all their hard work without actually doing any of it. It was a win/win. Well, it was a win. Sometimes KDTR and I would sit in the shade and drink coffee and watch whilst my offspring turned the compost  or pulled weeds in the vegetable patch. That was surprisingly satisfying, I have to say. Most days though, Kathy would prepare a hot breakfast for my girls - eggs, toasted English muffins, a variety of jams and freshly ground coffee - and chat them up before they got to work. I did not have jobs like this when I was a teen. I scrubbed floors and toilets for minimum wage (at that time, $1.35 an hour) in the local A&W after the bars closed and all the drunks came for their midnight feeding. It was not pretty.

Anyway, while our house was up for sale, I frequently had to skedaddle with the dog while agents showed potential buyers around. I got sick of walking or driving around in circles for hours, so one morning I asked KDTR if I could sit on her back porch for a bit until I got the all clear to return. She couldn't be there, but said "go on back and make yourself at home." Waiting for me was a chaise lounge and a tray with the morning paper, some baked goods and a thermos of ice water and sliced limes. That's the kind of friend and neighbour, oh yes, is my KDTR.

As if that weren't enough, every year at Christmas, KDTR makes cookies and distributes them to all her friends. And when I say makes cookies, I mean by the hundreds of dozens. This year alone, there were thirty-two varieties of cookies in each tin or box. If cookie baking were a competitive sport, she would be a gold medalist. Don't even think about competing. She would take you down.

Just gaze upon the splendour. See the doggy on the top of the box? That was no coincidence. 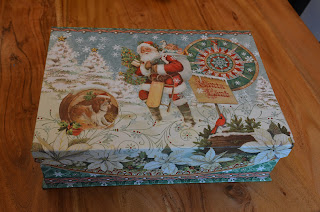 Let's take a peek, shall we? 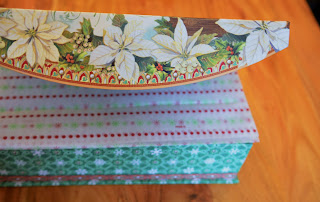 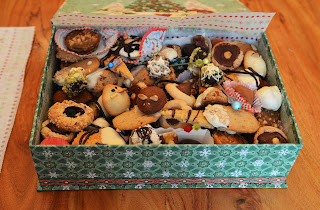 Do you see the ones that look like mice? Mice! With ears made out of almond slices and tails of licorice whips? I'd show you the coconut mound thingies dipped in dark chocolate, but you'll have to make do with a photograph of thirty-one varieties because I ate them. 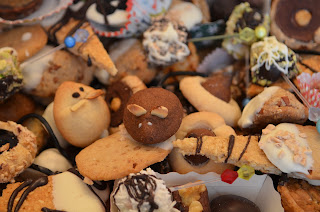 And to continue the Christmas theme, here are some of my ornaments. If you post photos of your ornaments, let me know in the comment section. I love seeing how people decorate their trees. Are yours hand crafty? Citified and all fancy? Do you do tinsel or no tinsel? Coloured lights or white lights? Big lights or small? Twinkling or just on? I lost the lights battle again this year. I wanted little white fairy lights, but Doug insisted on these mini-twinkling ones that harken back to disco days in their intensity. 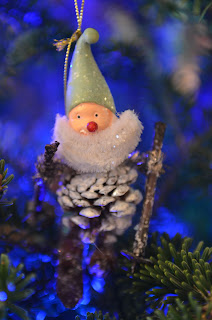 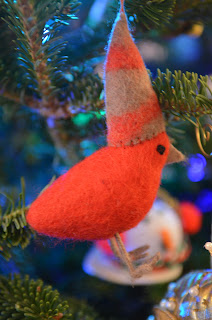 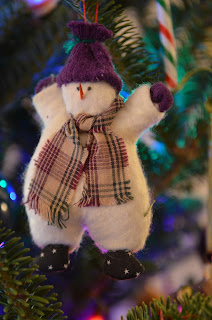 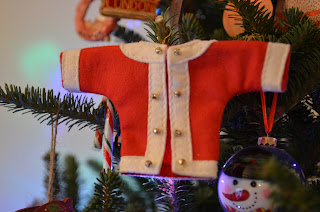 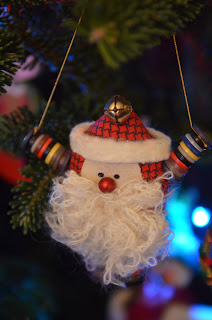 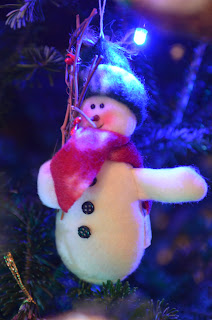 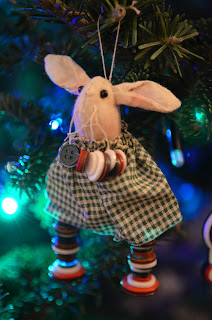 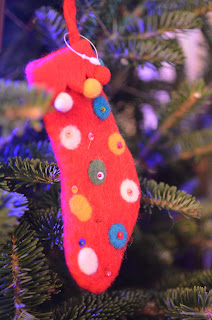 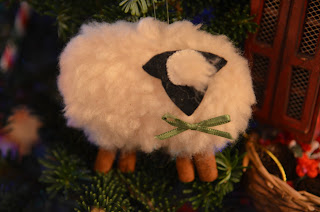 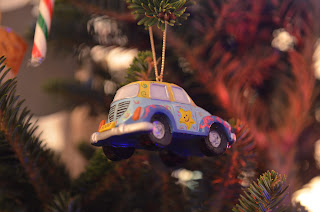 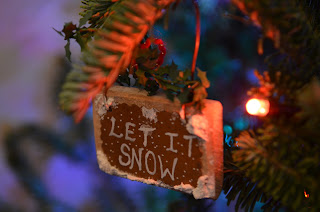 What goes on in your public parks?

Because we have some badass birds in our park.

Dr. David Bird, our local bird expert (not kidding, that's his real name) says it's an osprey, not a golden eagle, and that it may be a hoax. May.

It looked real to me.  I'm going to keep a close eye on Buddy so he doesn't end up as some bird's dinner.

UPDATE:  Yup, total hoax. A project done for a film class as a challenge to see how films can quickly go viral. I don't think they were expecting this much attention.
Posted by A Novel Woman at 5:22 AM No comments:

I spent approximately four hours on the phone with Amazon and UPS and former neighbours trying to sort out one eensy problem. Seems one of five separate Christmas orders ended up at my old house address. Even though I'd called Amazon a week ago to make sure this didn't happen.

Amazon was at fault. They were very nice about it, but they were at fault.

To their credit, they did their best to correct the problem and sent a second order ASAP so that I could have it before Christmas, though no firm promises. But that too was handled incorrectly which meant yet more phone calls, emails, and website surfings later that took a huge chunk out of my day. A day set aside for baking.

Meanwhile, I noticed our radiators were stone cold this morning, but there was no time to hunt down our building super. That's never just a quick phone call. I have to find him and tell him in person, because any question, no matter how minor, involves a series of inept pantomimes on both our parts because he's from Sri Lanka and speaks almost no English or French and I speak no Sinhala. It always ends with both of us throwing up our hands and him nodding his head which translates roughly to, "I have no clue what you are saying to me madam but that was very amusing to me ha-ha."

In the midst of my Amazon kerfuffle, several large men with thick, Eastern European accents (not sure why that matters, but it helps set the scene) followed by my tiny super showed up at the apartment door, and pushed past me swinging buckets and rags to "bleed" my radiators. The rads didn't so much bleed, as spew black oily water all over the floors. Meanwhile my daughter and I grabbed underwear out of the way and tried to keep the dog from bolting.

Once the little buggers were relieved of all their trapped air (the rads, not the heavyset men) things warmed up nicely, the Amazon thing got settled, and it was time to tackle the baking.

Which is when I discovered I was missing a few key ingredients. Which meant a trip to the store on what can only charitably be called The Crappiest Day Of 2012. It's gray, wet, and miserable. A day for curling up with a shortbread cookie and cup of tea by the fire. Except I was out of flour.

Picture me in my earflaps hat and black, down-filled coat, wild-eyed and on high alert, leaping over small lakes of gray slush at every corner, keeping a wary eye on passing motorists who, from the looks of them, were expressing their pent up anger at being on the road by deliberately hitting the puddles and sending them arching over the sidewalks at their prey. Quebec drivers are crazy psycho drivers at the best of times, but this kind of day sends them over the edge. And ice on the road does not slow them down, not one bit. If anything, it's like waving a checkered flag.

I learned timing was crucial, and moved along the sidewalk with stealth, crouching along lines of parked cars wherever possible in the hopes of avoiding a slush bombing.

I ended up on a wild goose chase around the city core looking for graham cracker crumbs (seriously, Quebec? Are they not staples in the rest of the country?? And forget Lyle's Golden syrup.) My pants were so heavy and wet at the bottoms that they dragged a few inches behind me by the time I got home.  I had homeless people nodding at me in recognition. I am not kidding.

I do not know of a writer who has not dreamed of having something like this.

Isn't this cool?  I wonder if it would fit in my stocking...

If you're looking for a really great Christmas idea for that special someone who has every kitchen gadget there is, consider this banana slicer.

Just check out the Amazon reviews highlighted in this CBC story and see for yourself.

It will enhance your life in ways you didn't think possible.

Even if you don't have monkeys, if you are the kind of person who is routinely ingesting one to two bananas a day, this device will save you so much time that experts have calculated if you buy a banana slicer and use it religiously, you will have added at least 37 minutes on to your life. Think about what you would do with those extra 37 minutes. Exactly. What couldn't one do?

I have my daughter to thank for bringing me this bit of holiday cheer.

Amanda Palmer, on cancer and friendship

The amazing Amanda Palmer has canceled her year of touring to be with her friend Anthony, who is about to start treatment for cancer.

You can read about it here.

Anthony tells stories, and one of the best I've ever heard is below.

Take heed, and listen to it in a quiet spot, because it will likely break your heart.

This, my friends, is the power of story.

There is a plethora of tasteful gifts on the market this Christmas.

There is the "Santa's Farting Butt Travel Pillow"  because it's not enough to keep a treasure like this at home, you'll want to take it on the road with you and "crack up" your fellow travelers. Guaranteed to become a family heirloom.

How about a Christmas ornament that looks like a cat poo?  (I wish I was making this up.)

And still, as tasteless as these are, none of them compare to the new John Travolta and Olivia Newton-John Christmas album.

Just when I think holiday music can't get any worse, we get these two crooning to each other. You know how when you have a sore tooth, and you keep poking it with your tongue even though it hurts? Try listening to a sample or two.

If anyone buys me this CD as a Christmas gift, I promise you I will glue my ears shut then hurl myself off a bridge. I would rather lather up with nose gel and deck the halls with cat turds.

(I would, however, wear a raw turkey hat as an homage to the inimitable Mr. Bean...although I guess technically, if I wore it I would be imitating him...)

Also known as a Glugglejug.

I have one. It's dark green, and it's my new best friend.

It was a gift from my friend Sylvia, who said it's a traditional housewarming gift. I thought it was a Swiss tradition, but now I think she meant New England.

In any case, I can't stop using it.

It makes me laugh every time I fill Buddy's bowl or water my plants or fill my coffee maker.

It is so going on my Christmas table.