The last ride for the season

We took the boat out of the water last weekend and decided to take one last ride. Of course, Buddy got into the action. He loves nothing more than being with us in the boat, unless it's eating thongs or dead squirrel.

This is Buddy before the ride began. He looks like a Breck girl model, no? 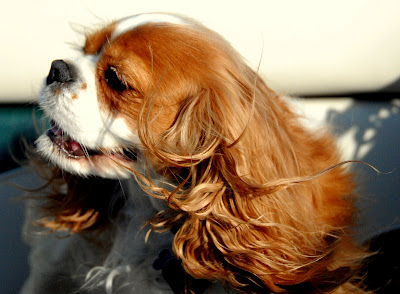 But then the Skipper picked up speed. 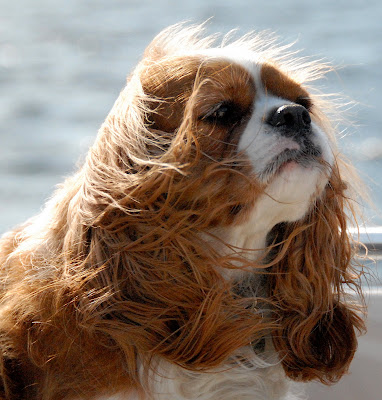 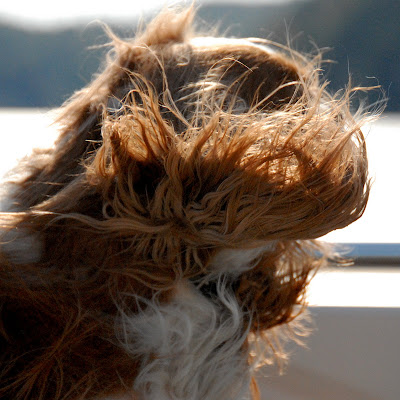 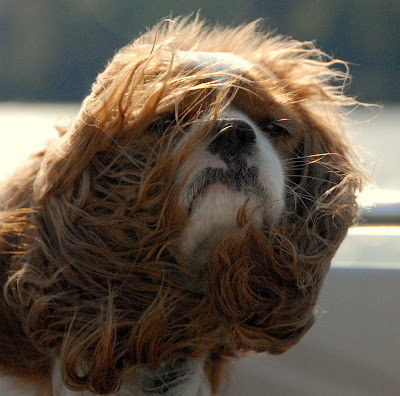 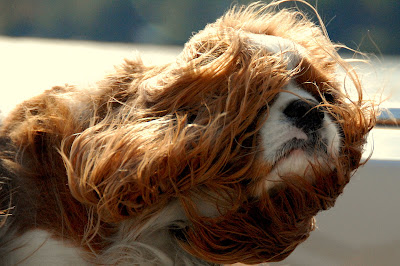 The Skipper seems pleased with himself, no? 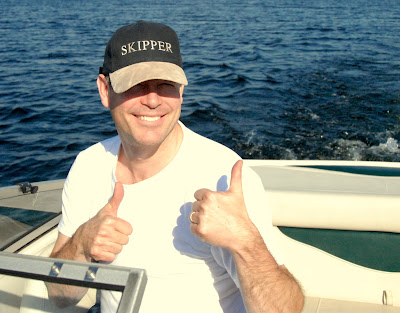 Mother Nature is messing with my head

Okay, first I have to tell you if you are easily offended, or if you are at work or you have small children about, then this is not the post for you.

Don't say I didn't warn you. (And I apologize for the quality of the photos. I don't have my trusty Nikon with me, so I had to use my Canon Sureshot.)

Remember, I am only reporting what I found lurking in my yard, so don't be hatin'. I didn't create this thing, Mother Nature did, and I think she is must be going through some kind of existential crisis and chose my backyard to express her angst. I don't think it's an exaggeration to say this thing is freaky. It also explains why my lawn-care guys were giggling and calling their buddies parked out front in the truck to come have a look.

My morning started out innocently enough. I was picking up "Buddy bombs" in the yard, and I saw Henry peeking through the fence. I love photographing Henry because he's a big goofy retriever with a wise old face.

Here is Henry at the fence: 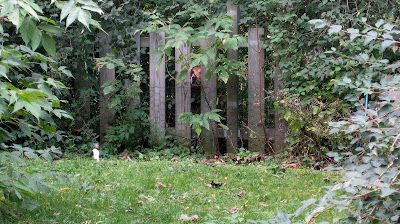 But what is that white thing on the ground in the shade of the forsythia, down in the left corner? I moved in for a closer look, as did Buddy. He seemed a tad wary.

Now, I'm no fungi expert, but Holy Mother of all Mushrooms....this is what I saw growing at my feet: 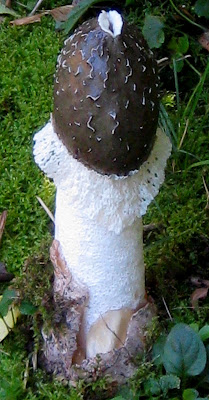 Seriously. It looks like Sir Walter Raleigh on his way to a fetish party, his manhood embellished with an Elizabethan ruffle which is clearly tied too tight. 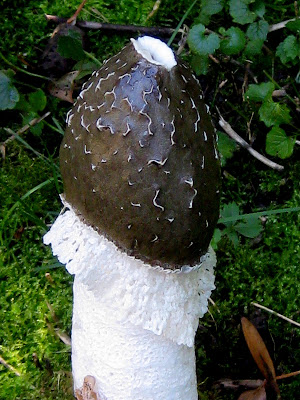 And if the sight of this thing wasn't bad enough, it had a smell that could knock you over from twenty feet away. How to describe the stench? I guess if you took a dead body, stuffed it with moldy mushrooms and unwashed gym socks, let it stew for a few weeks in warm sea water then sprinkled it with acetone you might come close. Buddy then whacked it over with his tail. 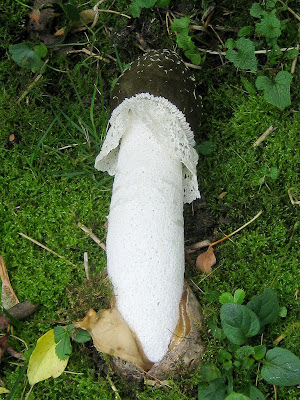 To avoid any accidental poisoning, I stuck the thing up in my flower box. The next day, the stench was worse than ever, and it was coated in giant flies which had already devoured the brown coating on the....head, I guess you could say. I placed a ruler beside it, and as you can see, this thing is a full eight inches. (I'm not touching that one, I'm not going there, I will not make a joke, I will not.) 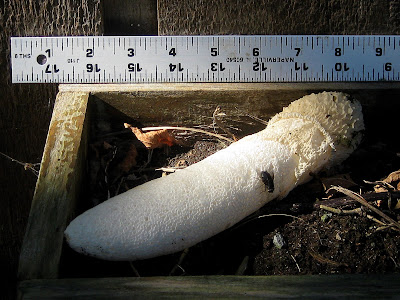 If anyone could tell me exactly what this is, and if it's poisonous, I'd really appreciate it. I tried Googling it, but the entries that popped up when I put "mushroom + penis shape" are probably best left to your imagination.
Posted by A Novel Woman at 7:55 AM 43 comments:

On the craft of writing

Here is a wonderful link (courtesy of Susan Adrian) to Jennifer Lynn Barnes who writes about finding and keeping the joy of writing. Most of it (okay, ALL of it) rang true, especially:

"Give yourself permission to suck." I've heard this before. It's a variation on the Shitty First Draft theory, but this is a really hard habit for me to break. I began writing in the pre-Whiteout pre-Spellcheck prehistoric days so if I made a mistake, I had to start all over again. Uninhibited, free-flow expression took a backseat to slow, careful, accurate prose (although in my case, free expression was screaming out the window and mooning innocent bystanders while plotting for her turn at the wheel.)

"Don't stop reading as a reader." Ah, another bad habit of mine and one I'm trying to correct. I also carry this one over to the movie theatre where I find myself thinking things like, "oh, there's the inciting incident, a little late and I would have done it this way," However, when I am lucky enough to find a really great story with characters I believe in and care about, I will be completely immersed in that world and forget who wrote it, or even that I'm sitting there reading. And a great story isn't necessarily a well-written story. THE DA VINCI CODE comes to mind as a book savaged by critics as poorly written and yet, I kept turning the pages to see what happened next. Which makes me wonder what Brown's S.F.D. looked like.

I also realized I have to stick to what I'm good at, and write what I enjoy. I am asked frequently if I'm going to write a novel, and while I have a number of ideas outlined and chunks written, I find that short essays are fun, and they're what I've been able to publish, so I guess if it ain't broke....

If you write, have a look at Jennifer's blog and see if you recognize yourself. I know I did.
Posted by A Novel Woman at 8:41 AM 3 comments:

How I spent my summer vacation

In the boat looking back at these two goofballs. 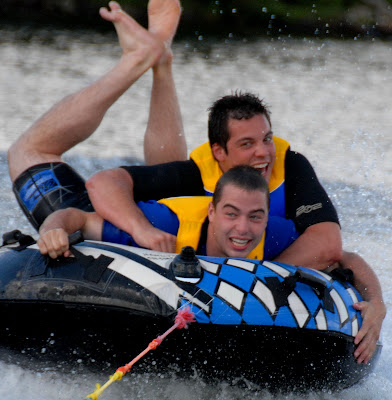 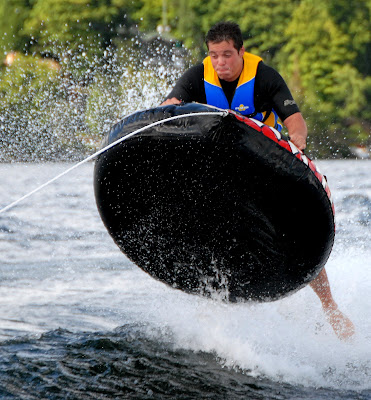 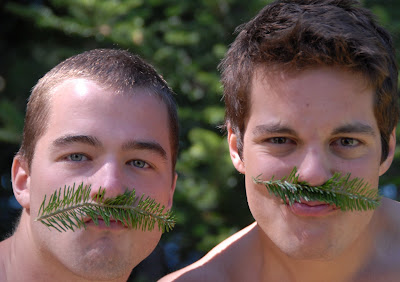