Some nice flower photos from the lake

Kathy Down The Road complained about lack of new content here on la blog.

She said she had enough of the squirrel crafts.

I said I have absolutely nothing to report unless you want to hear about how I washed sheets today and cleaned behind the microwave (there were vitamins with an expiry date of 2002 hidden back there) therefore the blog is "resting" like a field left to fallow, in order to restore its fertility.

She is having a hormone-challenged day and practically demanded entertainment.

So I went outside, even though it has been raining all day, and took some flower shots just for her because she loves gardening. I can fake that I have an actual garden here at the cottage with some close-up shots of the random flowers that pop up here and there in the borders of the gravel driveway that constitutes a garden, and no one will know the difference.

There are orange blossoms, honeysuckle in orange and red, daisies, wild roses, geraniums, evening primrose, some purple thingies, a red thingie...a veritable cornucopia of floral awesomeness and artfully glistening with droplets of water.

Unfortunately, when I went to upload them (and dry myself off and put salve on my mosquito bites) I realized that I'd left the cord I need at home.

How I Will Be Spending My Summer Vacation

What have you got up your sleeves for this summer?

Warms the cockles, this does

I love when this happens.

I don't normally watch this show, but I happened to catch this guy one night. He's so unused to performing, he had to be reminded to use the microphone in order to be heard. I love his voice and his humility and the way he gives this song a whole new twist. Brilliant.

How to be alone 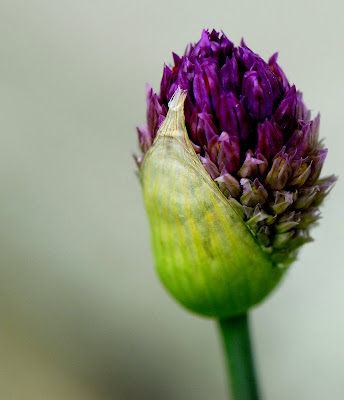 Do you like being along? I literally crave it, especially when I haven't had enough time on my own.

Some people don't know this, but I went through a divorce in my late twenties. During this process, I realized I had not spent much, if any, time completely alone. I went from high school and living with my parents and siblings, to university and living with assorted roommates, to getting married to my high school boyfriend directly after university and then sharing an apartment with him, to divorce five years later. 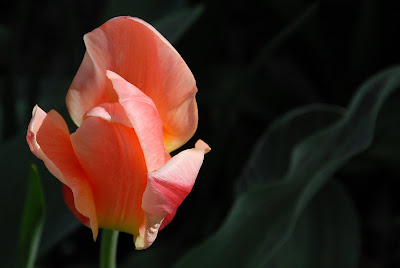 What frightened me the most was the the prospect of being alone, or more properly, being lonely.

I loved the freedom of listening to my music, eating whatever I wanted or not at all, wearing what I wanted without comments, walking all over the city, or just sitting quietly on the sofa with a book (and my phone unplugged and stuffed in a drawer.) I bought a bike and cycled all over downtown Toronto, over to the island on summer evenings with a sandwich and Newcastle Brown in the basket (Newcastle Brown because it is meant to be served at room temperature.) I dined in fancy restaurants alone, attended concerts on a whim, art gallery openings, as much as I could cram into my new life. I forced myself do it at first, but after a while, walking into a room alone became comfortable.

Now I'm quite happy to spend time with my wonderful, patient husband of 25+ years, and my now-grown kids, and my friends, but if I don't have chunks of time where I'm alone, I get antsy. Is it a writer thing? I suppose artists and musicians probably feel that way too, but I know writers in particular can be a solitary bunch, happily living with the people in their heads. Friends sometimes call me a hermit. My non-writer friends, I should add. I find it hard to explain why I need this time, but I do. 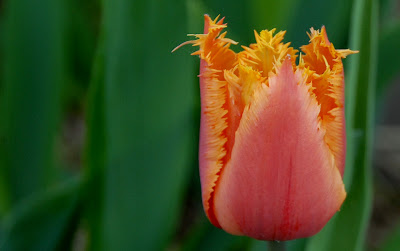 ...lonely is a freedom that breathes easy and weightless, and lonely is healing if you make it...

...if you're happy in your head, then solitude is blessed and alone is okay...

from a poem by Tanya Davis, more here:


nod to Helene Boudreau for the link

Do you need time alone?

Or are you happiest when surrounded by lots of people?
Posted by A Novel Woman at 10:00 AM 14 comments:

Specifically, people who talk during movies.

It's one thing to talk through the trailers. I'll give a lot of leeway because everyone is getting settled in and the lights are usually on, so that's cool. But when those lights dim, and I'm ready to be transported to another world so that I can forget, for just a few hours, that my dog just shat another partially-digested thong or my roof needs replacing, and you're still running your mouth off about all-inclusives in Cuba or whether cherry or banana Popsicles are better (banana, everyone knows that) well, that drives me batty.

You're not sitting in your rec room with your big screen TV so please, with all due respect, STFU.

I have no mercy in my heart for these people. Especially:

1. Those eejits who lean over to their companions and guess, within earshot of several rows, what the hero is about to do.

2. Those eejits who repeat what the hero just did. You know, that bit of action we just watched onscreen together, mere seconds ago.

3. Those eejits who give advice to characters as though those characters onscreen can hear them. "Don't go down that hallway, don't go...oh my," then they usually revert to rule #2, "Tch. She went down the hallway. Can you believe it?"

4. Those eejits like the woman who sat directly behind me and broadcast in a stage whisper to her husband what was about to happen because she'd already seen the movie.

5. I'd like to add people who unroll candies with exaggerated slowness as though we can't hear what they're doing because they're doing it Really Slowly, but I won't. Sure they're annoying or possibly just hard of hearing, but not deserving of Theatre Outrage.

6. People who pile their purses/coats etc. on the chair next to them in an attempt to block someone sitting there when the theatre is full. Come on. You're fooling no one with that ploy. There was a woman last week who, when I sat in front of her, put her (I feel compelled to add here the descriptive 'stripper shoes' as in giant wooden heels and ankle strapped) shoes up on the back of the seat as a "silent" protest. I would have stuck it out through sheer stubborness, but she also couldn't stop talking. I moved back a row, then took secret delight when a rather large and pungent man inched past me to sit directly beside Stripper Shoes (forcing her to move her purse, see how that doesn't work?) And then another geezer, much taller than me, shuffled into the seat directly in front of her, the one I had just vacated. Karma. It's gonna do its thang, baby.

7. Chair kickers. Are you really that dense or do you not care? Do you honestly think I can't feel it when you shift and kick and squirm and cuff the back of my seat repeatedly? If you're that antsy, go to a hockey game.

8. Women with heavy, cloying perfume or men doused in cologne. No one wants to smell you unless you smell like fresh oatmeal cookies. Ugh. I'd rather be locked in a Johnny-on-the-Spot in the noonday sun after an all-you-can-eat Mexican buffet at summer camp.

9. Open mouth chewers who chow down on Nachos. Also, someone rooting around the bottom of a popcorn bag. And honestly, what are you going to get out of that besides a new filling for the cracked molar you're going to be spitting into your palm?

10. People who make or receive phone calls, or who text their friends because they can't stand to be out of the (imagined) loop for more than 90 minutes. Unless you're a transplant surgeon and some nurse is holding a cooler with a brain on ice and is summoning you to the O.R., turn it off people. (Yes, I know you can't transplant brains. It's just a dream I have sometimes, usually when someone is talking behind me in a movie theatre. "Hand me a scalpel and a melon baller, STAT!")

Which brings me back to the talkers. A theatre in Texas has had the cojones to address this issue.

I heart this theatre. If this theatre was my boyfriend, I'd do everything it asked of me, that's how much I heart this theatre. I'd marry it and have ten thousand of its babies if I could. (Name that movie.) I'd bring it breakfast in bed and while it was sipping the cappuccino I made with a leaf design in the foam and pulling apart a warm croissant, I'd rub its feet, even if it had callouses.

(I've tried to adjust the width to make it easier to read, but it's not working, so if you want to read it on a larger screen, just double click on it.)


thanks Martha W. for the link!

What do you think? Would you stand up and cheer? I would. But I'm guessing you already figured that out.

If you want to read an article about it, go HERE
Posted by A Novel Woman at 10:10 AM 7 comments:

My daughter sent me this video.

She is about to leave the nest.

Are you trying to kill me?

Damn it, I'm a doctor not Captain Kirk

My little boy graduated from McGill yesterday with a degree in finance.

Somebody please explain to me how he grew up so fast, from this little guy who slept with a blankie and a firefighter's axe (plastic, but nonetheless powerful in our little hero's hands and capable, in his mind, of chopping us out of the house in case of fire during the night) to the man who now stands before me?

(For the story behind his blanket, go here.) 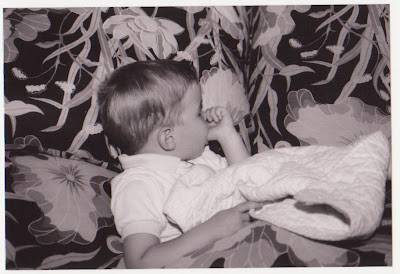 Mothers, listen up. You know how women of grown children always say "pay attention, because those children are grown before you even know it happened"? Well, it happened. And I'm shocked at how it's all over but for the dirty socks under the couch. 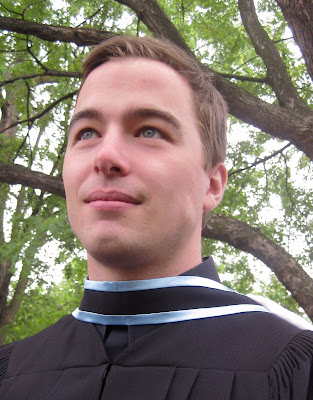 Congratulations, boy of mine. We are so proud of you. Go forth and discover the world, but don't forget to come home sometimes. I'll make waffles.

The commencement speech in the morning was delivered by none other than William Shatner.

Chris, however, had his ceremony in the afternoon. But here is Dr. Shatner's speech, for those of you who are fans. (And really, who isn't a fan of The Shat?) According to some accounts, the president of McGill flinched a few times as Bill remembered some good times. Hallmark of a good speech, I'd say.

And if you really want a treat, check out his rendition of Oh Canada. Then check out behind the scenes. I wept.