Tartiflette AKA The Heart Stopper 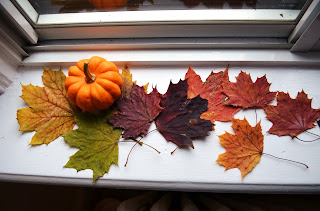 When the weather turns cold, my thoughts turn to tummy-warming recipes. These are usually things I don't make often as they're rich and filling, but once in a while I reckon they're okay and they make the long, cold, dark days of winter bearable. Take tartiflette for example.

Recently I found myself in the Atwater Market, a farmer's market housed in a beautiful Art Deco building next to the Lachine Canal and close to where I live. It has butchers, bakeries and cheese shops, and all kinds of fruit, veggies, fresh flowers even local wine. It's a glorious place to visit.

I wandered in to my favourite cheese shop and since they have over 750 kinds of cheese, I asked my cheesemonger what would be a good cheese for scalloped potatoes besides the usual Gruyere. There happened to be a chef standing beside me, waiting for his cheese order (which confirmed I picked the right shop) and he suggested I try a dish called tartiflette. "But you need to get a reblochon cheese. It must have this cheese because it makes the dish." 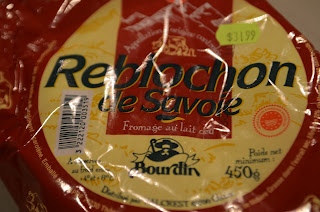 Reblochon comes from Savoie, France. It's a soft, creamy, rich cheese with a yellow crust covered with a fine white powder. It's a bit like a wheel of brie, but has more of a nutty flavour.

Reblochon, according to legend, was first made in the 13th century in the Thones Valley of France. Farmers at that time would rent pastures from the wealthy landowners, and they gave them some of their milk as payment. When they were calculating exactly how much rent was to be paid, the farmers would not milk their cows completely in order to rig the quantity produced (which would therefore lower their rent, the crafty buggers.) Of course, once the landowners took off, the farmers would do a second milking which produced a milk very rich in butterfat. This was the milk they used for the reblochon cheese, which literally means "to milk again." This story pretty much sums up Quebecers and their views on the taxman. We even have commercials that urge us not to pay "under the table" which everyone ignores owing to the fact that we all are in agreement we pay too much tax. Because we do.

But I digress. We're talking about cheese.

I agreed to take a wheel of reblochon cheese, and only then found out it was $32. For CHEESE.  I couldn't lose face in front of the chef so I took it. Begrudgingly, I have to admit.

Well, I made my tartiflette, and luckily for that chef, it was amazing. You can find various recipes on the web, but basically it's potatoes, bacon, onion and the halved reblochon on top, baked in the oven so the cheese melts and melds on to the layers below. Oh My. Now if you can't get reblochon cheese, or you don't want to spend that much, you could I suppose substitute brie and add a bit of Gruyere or cheddar or something else. But if you can, you should try it with the reblochon at least once. So worth it. 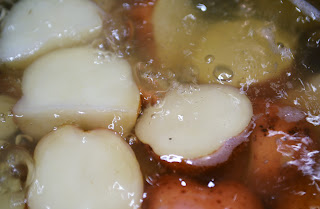 Preheat the oven to 400F. Bring water to a boil. Halve the potatoes, and boil them for 15 minutes or just until barely cooked. You can slip them out of their skins at this point, or leave them on, as I did. Cool slightly, then cut them in thick slices. While the potatoes are boiling, cook the onion and bacon in butter until they're soft but not brown. 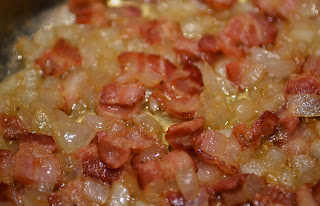 In an ovenproof, earthenware dish (I used my Le Creuset oval dish, which I lurve) rub the bottom and sides with the cut garlic clove. Place half the potatoes on the bottom, spoon on half the onions/bacon mixture and season with salt and pepper. Repeat with the rest of the potatoes and onion/bacon. Pour the cream on top. Then halve the reblochon cheese through the middle and place both halves, crust side facing up, on the potatoes. (You don't have to use cream, but it looked a bit dry to me and it worked out just fine, so do as you wish.) 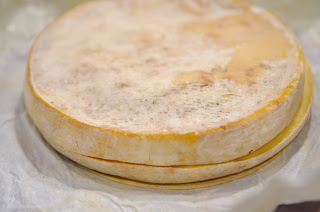 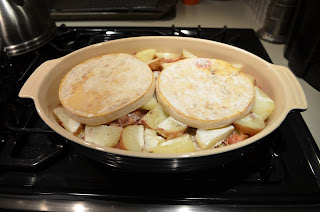 Bake for 10 minutes. Reduce heat to 350F, and bake for another 25-30 minutes or until it's brown around the edges. The cheese will melt and bubble all around the potatoes. Do not think how many calories are in it. Just plan on a long walk in the snow knowing this dish will keep you warm. For days. Maybe weeks. 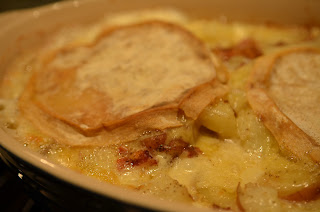 Serve with a green salad. Don't even think about dessert with this. 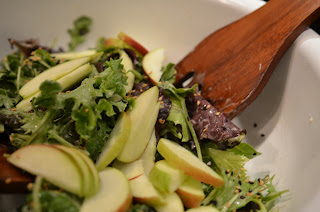 To My American Friends and Family

A little something to help out with your Thanksgiving preparations.

Check out Helen's list of rules for a happy Thanksgiving dinner. 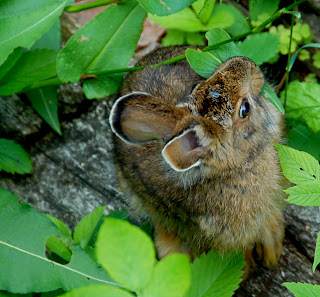 And Now, A Word on Gifts and Giving

"A gift will
come back to you
on its own." 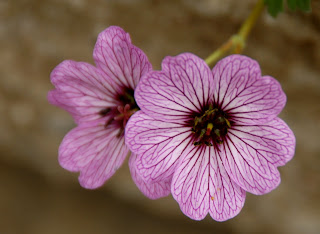 Send me presents! I love presents.

(AIEEEEEE!  The second I typed that, a spider crawled up my arm, right on the tender, white, vulnerable underside of my arm! If you know me, you'll know I have a deep, abiding spider phobia, but that would have made anyone jump out of their chairs.)

Okay, Universe. Got the message.

I take back everything I said.

Giving good. No reciprocity. Got it.

Or tickles me under the arm.

(Shudder.) Off to find my heart. I think it leaped out of my chest, crawled under my desk and is cowering behind my slippers.
Posted by A Novel Woman at 7:34 AM 4 comments:

City Walk # 146 The Fort Around the Corner

How many of you can boast of having a fort in your backyard?

Montreal is steeped like a teabag in history and culture. Take this, for instance. It's mere steps away from where I live, in the heart of the city: 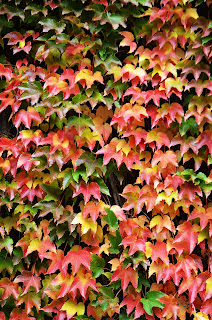 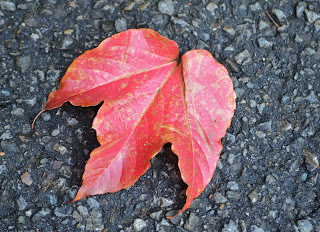 Back in 1683, over 200 aboriginal people (Iroquois, Algonquins and Hurons) lived on this site, literally around the corner from my new flat. Then the Sulpicians showed up, and in order to protect themselves from Iroquois attack, the priests built this fort in 1685. Everything was destroyed in 1854 except these two towers which still stand today.

These towers, each 43 feet tall, were part of that mission, built under the direction of, and personally funded by, one François Vachon de Belmont, a wealthy Burgundian and Sulpician i.e., a member of the Society of St. Sulpice in France.

Sulpicians attest they were mostly concerned with the academic and spiritual formation of priests. They also played a major role in the formation of Montreal and bought huge tracts of land. They (and the government) out and out deceived the Mohawks and took their prime hunting land on the St. Lawrence River. The Mohawks had been established there since the 16th century, and other tribes can be traced back to over 1,000 years, so to have been conned out of it is something that rankles to this day.

(Kanehsatake remains a Mohawk settlement, one of the Seven Nations of Canada, and self-governed by the Mohawks. They continue to fight to maintain their rights to their land. The Oka Crisis is the most recent example of this ongoing battle. This was a 78 day stand-off brought triggered by the neighbouring town of Oka attempting to extend a private golf course not only over an old pine grove, but also a sacred burial ground. Not cool.)

Anyway, this explains the need for the bastions so the priests could have a little hide-out when things got heated.

My goal is to get inside one of them. And the chapel in behind. Not sure if that's allowed, but you know what they say - where's there's a Pam, there's a way.

I haven't even shown you the old section of Montreal yet. So much to see and do here in La Belle Province!
Posted by A Novel Woman at 3:38 PM 12 comments: 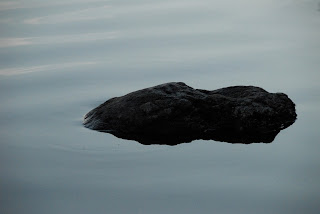 People who have met me in person might have a really hard time believing this, but I would actually describe myself as an introvert. I can turn on the switch in a social situation and become what Mike Myers describes as a Site Specific Extrovert, but I crave quiet most days. Social situations tend to exhaust me, whereas they energize extroverts. But hey you'll strike up a conversation with anyone with a pulse, I've been told. That's mostly because I'm shamelessly nosy about other people's lives. But if you put me at a table with strangers and ask me to converse, I'm more likely to convulse from nervous energy, then expire. 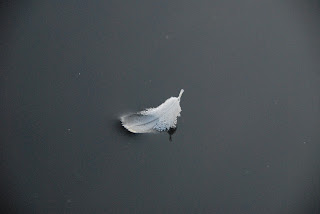 So how about you? Extrovert or introvert?
Posted by A Novel Woman at 3:08 PM 11 comments: 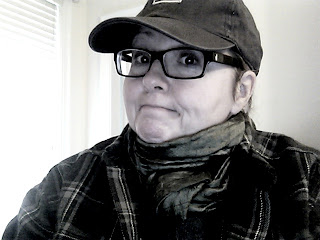 If you dress like this in the city, even if it's pouring rain and you have to walk your dog because you no longer have the option of lolling about in the morning in your pajamas whilst the dog does his business and frolics in the fenced-in backyard but hey I'M NOT BITTER ABOUT THAT PART OF APARTMENT LIVING, and even if you gussy up said plaid jacket and Sandals baseball cap (read:classy) with a colour coordinated silk scarf, people will avoid looking you in the eye nor will they stop to pet your dog.

Montreal women do not dress this way.

They wear chic little outfits like the woman I saw yesterday. She was wearing Coach rubber boots with corset type laces up the front, black tights/skirt/jacket, carrying a silver bag, smoking an improbably thin cigarette and carrying a baby sling housing a Chihuahua in a black vest with sheepskin trim.

But would she win in a bar fight? 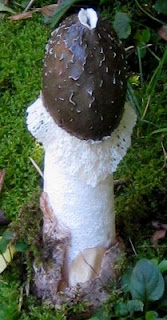 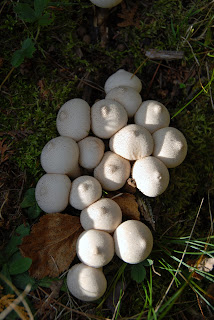 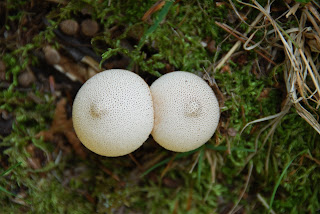