Whimsical, exciting, scary, slightly bizarre and when it's over, completely satisfying.

My sister-in-law Liane sent this to me.

It made me cry.

But then I cried when I watched that IKEA lamp left out in the rain.

Your turn. Have a look.

Then leave a comment and tell me if you cried or not.

Why yes, it IS my birthday!

Did I have steamies and poutine at La Belle Province with Youngest today?

Why, yes, yes I did. You know why? Because it's my birthday and I can.

Am I having unlimited sushi with my beloved and all my little chicks tonight?

Might there be whisky (Macallan 18, my current fav) and dark chocolate after the meal?

I think we all know the answer to this.

Hope your day is as good. Everyone is celebrating here. 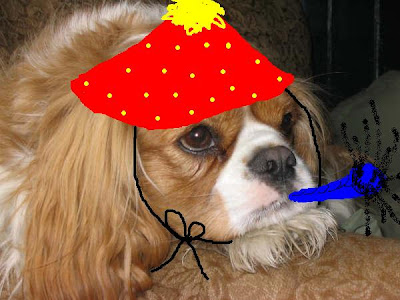 End the week with a laugh

Apple iPhone has a problem with Scottish accents.

And so this one sent me over the edge.

Posted by A Novel Woman at 1:11 PM No comments:

We're in the process of going through our house - room by room, closet by closet, even drawer by drawer if it's a particularly challenging day - in order to reduce clutter.

After more than twenty-three years in this house, a move downtown is now a real possibility seeing as our little chicks have more or less flown from the nest. Our dream is to settle into a much smaller dwelling, probably a townhouse or apartment, so we can enjoy all those things the big city offers and give up the things we don't want like lawn care, snow shoveling and house repairs. Doug will be closer to his office, with luck within walking distance, and we will be able to visit museums and galleries and restaurants just outside the front door.

But first, the junk.

I have to wonder how one family could collect so much stuff? When I waver and rethink whether I should give something up, I watch this video to remind me why it's important to do so.

The point he made about camping is what struck home for me. Though I love being outdoors, the simplicity that comes with camping is what I truly loved about it. After careful planning, I brought the bare minimum we'd need to live happily for 2 weeks at a time - just the clothes we'd be wearing, the kitchen bits and bobs I'd cook with and the food we'd consume.

Minimalism, with loons and campfires.

No internet, cell phones, TV or other distractions. It's the most peaceful I've ever felt.

The more stuff I collect, the more frazzled and overwhelmed I feel, and I have a lot of stuff.

Time to purge, my friends.

When you "feel the soft social pressure" to be great

Trey Ratcliffe, one of the greatest photographers I know, talks about his work and his inspiration.

If you watch until the end, you will hear him talk very frankly about taking risks.

And how to "stumble into success."

Love this guy. Love his work.

For Canadians, hockey is not a sport, it's a religion.

My husband has played in a local league for as long as I've known him, even before we started dating, so we're talking thirty-plus years. Game night took precedence over everything and everyone. I understood from the beginning that hockey night was sacred and nothing interfered with his schedule, not dinner parties, not evening classes, not even childbirth. After the birth of our second and third kids, I shooed my husband out of the hospital room to go and play with les boys. He would have stayed, but I knew from his restlessness that he wanted to share the news of another baby with his buddies and, well, since he was there, lace up his skates and play a bit of shinny.

I got to know pretty much all of the guys on his team over the years because they'd phone me ("Oui bonjour, Madame Secretaire!") for the master list when they were looking for a spare. They were an interesting bunch of people; one might even say, a motley crew. One player had only one arm but was as skilled as a professional in the NHL, L. was a woman who once won gold for Canada on the women's team, and Stewie, well, he was in his 80s and still skating. The only rule was, "If Stewie gets the puck, Stewie keeps the puck. No contact, point final."

My first question to someone calling to cancel was always "are you the goalie?" because goalies are gods in the game of hockey. Not having a goalie meant a mad scramble to find a replacement. We even had the sixteen-year-old kid down the street on retainer with an offer of a lift and cash. If a goalie couldn't be found or bribed, the game would go on, but the thrill was sacrificed and it became less a game and more a form of exercise with a puck and skates.

I went to watch my husband play only once. I went to all our kids' games (our son and one of our daughters played.) The stands were full of fans made up of siblings and parents and grandparents so it was usually a noisy affair, the gossiping over arena coffee punctuated by whistles and cheers when a goal was scored, or jeers when a ref made a bad call.

So I decided to be fair and attend one of my husband's games. It was, to put it kindly, anti-climactic. Because the games take place in the hours no one wants, late at night or early morning, the stands are always empty, the only sound that of the hissing ventilation system and the mop and pail of the arena cleaning staff.

So when I saw this video, I thought of my husband and his team. And what it would have meant to them to have this happen to them. My husband would be the guy sitting on the ice at the end.

"And the chicken is loving it." Favourite line.
Posted by A Novel Woman at 8:55 AM 9 comments:

But which genre will I be?

I'm not the only one

So I'm relieved to see that I'm not the only one who gets overwhelmed when presented with good news.

I remember when I got a new bicycle for my birthday. When I came into the living room and saw it leaning against the fireplace, I was rooted to the spot. I burst into tears and literally couldn't speak I was that choked up. And I was 46 at the time. (Okay, that last part is a lie.)

Watch this and tell me the truth: did you cry, laugh or do both?