Equal time for The White One

AKA "Kicia" which means "Little Cat" according to her previous owner, who was Polish. 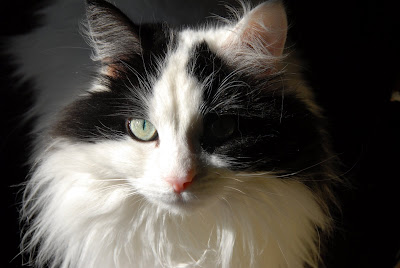 This cat is tiny, about a third of the size of Boris, but she is ten times more fierce. If they both run at the food bowl, he always capitulates. If Boris is already at the food bowl, she sits right behind him, almost touching him until he gets so rattled, he stalks off in a huff. Boris only looks tough, but he's really a big pussy. Kicia looks sweet and endearing, but she is a tiger disguised as a kitten. Someone told me she's a Turkish Van, or "swimming cat." She has a head the size of a tennis ball, but I think the tennis ball might be a shade smarter. She's lithe and bendy like an accordion - you can literally hold her out and stretch her to double her length - and we sometimes play her like one, but the sounds are not nearly the same. All high notes and no chords whatsoever.(I'm kidding before you start pelting me with kibble!) She will slide through your hands like an eel if you're not paying attention, then roll around upside down as you try to walk past her, which always cracks up our mailman. I guess she deserves a haiku or two.

White with black mask and
tail; pink feet, nose, tongue and ears,
What planet is home?

Surprise The Boris
Once more with a leap and nip,
And you'll be supper.

I thought cats meowed
But you chirp like the birdies
You catch and devour.

Then there's my sister's cat, Olivia. 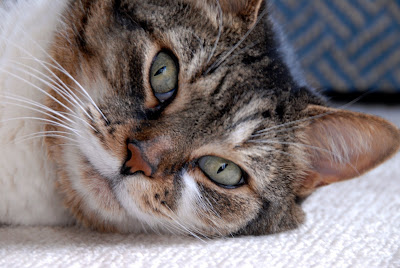 I'm sweet and gentle,
But too fat to lick my butt,
Which amuses them.

Is this some sort of magical secret post that only some people can see, or is it some sort of philosophical statement, complete with just the title? *g*

I tried abracadabra, but it didn't work.

Pam, get right back to your computer and finish your post.

Gah! My internet connection cut out in the middle of my composition. Probably because it's currently minus 22 and it crawled under a space heater somewhere.

I'm back. Now I have to find a photo of The White One.

Hiya Pam! Does Kicia have two different coloured eyes? That would make her a Van cat. I wonder where the swimming cat idea came from - probably something to do with the fact that Van is a lake in Turkey! They usually have all white fur, so maybe Kicia's a mix? She's very pretty :-) How comes it's always the big cats that give way to the little ones? Mine do that too!
Here's a link: http://en.wikipedia.org/wiki/Van_Kedisi