On the lake side of our cottage is a two-storey wall of windows which, I admit, afford us a beautiful view of our lake. After many years of living in this cottage, we learned the hard way that when the windows are sparkling clean, the birds bonk into them on an almost daily basis. Our first summer of Avian Carnage included bluejays, grosbeaks, goldfinches, chickadees (no actual deaths as they're like fuzzy ping pong balls) nuthatches, and heartbreakingly, one hummingbird.

I have fought every summer since to leave the windows dirty. The little bits of dust and detritus from the trees were enough to alert the birds that this was not a safe thoroughfare. Hey, I'm not a tidy person by any stretch of the imagination so it was no hardship for me. I could still see out the windows, and the birds benefited, so it was a win-win.

My husband didn't buy it. He's a tidy-pants dentisty type of person and those sorts of people like things clean. But whenever he brought up the subject I'd distract him with a cold beer. This worked for about ten years.

The problem is, he's also a task-oriented kind of guy. It's a weekend wasted if some chore or another isn't completed. He has a mental checklist he carries around in his head and then goes through every Sunday night. (If he spent, say, a weekend lounging on a couch reading novels and eating junk food, his disappointment in himself would be profound. I, on the other hand, think this is a perfectly reasonable way to spend a Saturday.) So on his holiday this summer, he didn't loll, he hauled out the extension ladder and washed all the windows.

Almost immediately, the bird bonking began. Earlier in the day, I'd spent an hour or so watching two young yellow-shafted northern flickers preening and hunting for bugs, figuring out how I might photograph them to the best advantage, then one of them hit a clean window and died at my feet. A few hours later, my first sighting of a Blackburnian Warbler became my last as it too hit the Freshly Washed Panes of Death.


I'd post photos but the birds died before I had the chance to take any photos if you catch my drift.


An "animated discussion" ensued between my husband and I, interrupted by a group of young men who dropped by for a social call (i.e., beer and chips) and soon wished they hadn't. My husband's solution was to hang plastic lids from strings as the boys looked on. They bounced around in the wind and clattered on the glass not unlike birds bonking into windows (the lids, not the boys.)

My temporary solution? I removed the lids and replaced them with strips of tin foil, which now flutter about with the slightest breeze. The reflective nature of the foil coupled with the screechy sounds as the foil scrapes the glass serves its purpose as there have been no bird deaths reported. 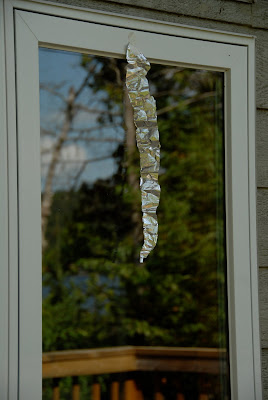 However it now appears that the Blair Witch has taken up residence, and the noise is unnerving in the extreme, as it sounds as though she is scraping her long filthy fingernails across the glass trying to get in.

Ideas, anyone? I've heard of these ultraviolet cutouts that can be applied to windows, that are transparent to humans but appear solid to birds. Anyone use these?
Posted by A Novel Woman at 7:18 AM

Instead of the tin foil, cut a plastic grocery bag into strips and tack that up. It flutters and sounds like wind in the leaves more than fingernails on glass.

It's what we used on the farm to deter barn swallows from nesting above the windows.

If you have any junk CDs lying around, hang one of those in front of each window, but far enough away that they don't hit the windows all the time. When we have the Christmas decorations in the trees outside (junk CDs looped together back to back and clipped to the branches) the birds won't come anywhere near them.

Why don't you just hang your DH spread eagled from the windows...preferably dressed like a clown...

Plastic bag strips, mirrored UV film cut into shapes that you can put in the corners of the windows (you might have trouble though during mating season when the males think it's a rival,) they also make anti-glare film that you can cover the windows with so it doesn't obstruct your view but looks a bit opaque to the birds.

What a timely post. I'm having the same problem.

And Pam, I love your blog and have been a long-time lurker. Finally decided it was time to bite the bullet and register.

All those dead birds just grab at your heart, don't they? I hope you find a solution that is acceptable to both you and your husband. BTW I had to laugh out loud at nightsmusic's first suggestion!

You guys are the best!

I am traumatized just reading about those poor birds--I can't imagine how you feel. This same thing used to happen when I was a kid and the birds would fly smack into a picture window in our dining room. Really puts little kids off eating when this happens.

Unfortunately I have no solutions to offer. Looks like everyone else has come up with quite sensible suggestions.

Enjoy the rest of the summer!

I have hummers that cling to my screens, but the screens are full window sized. I don't have any windows that are just glass. Let us know how it goes.

Yes, NM, I know you were kidding, although if I thought it would work, I'd hang him up there by the ankles. And no clown costume. I hate clowns.

The foil strips are working, so no more bird bonkings. I'm happy. The birds are happy. Alcan Aluminum is happy.

I hate clowns too. I figured the birds would share the sentiment ;o)

Now all you have to do is buy stock in AlCan and you're set!

Seems to me I remember the Science Centre (Ontario) had these nifty bird silhouettes they applied to the windows. Maybe check those out.

No can do, Josh Healy. Last time I tried a giveaway, I was less than satisfied. If I do it again, it'll be on my own.

Word Gardener, I think those are the stickers I read about online. I'll check it out, thanks!

The foil continues to work its magic. No more birds have been sacrificed on the altar of clean. Once I get to migratory season, it's all good. Now all my little feathered friends have to do is avoid the giant OIL SLICK down south. I worry especially for the loons.

You can use window cling film and cut out silhouettes of raptors, they can be off-white, just a step up from translucent, and it will ward the birds away from the windows, but won't make any noise and they really aren't that intrusive. I saw them at the National Audubon Preserve in Manistee, MI

Hope one of the ideas works, I can imagine the Blair Witch noise on the window lol.

Amazon has window cling materials, here's one site, but I can't vouch for the quality, I haven't tried it.