If you're squeamish, don't read this.

If you love squirrels, don't read this.

Go make yourself a peanut butter sandwich and watch The X Factor. This post is to Cute Overload what Jaws is to The Little Mermaid.

So this blogger from T-dot, clearly a sensitive fellow and squirrel lover, happened upon one of the little critters after it was broadsided by a van.

The guy hopped off his bike, rushed to the scene and tried to "find a pulse" on its limp, furry body. He looked a little closer and thought "she" might have been nursing. The clues? It appeared she hadn't showered for several days, her tail was stained with spit up and her kitchen was full of dirty dishes.

Not knowing what to do, and unclear on the concept of roadkill, he called Toronto's animal services for advice.

Their response? Put it in a bag and leave it on the porch and they'll see about coming to get it in the morning. Um, that's why it's called roadkill. Also, they told him to watch the Monty Python Dead Parrot sketch before he called them again.

Not exactly the "proper send off" he was hoping for.

Btw, this is how we give squirrels a proper send off in our 'hood: 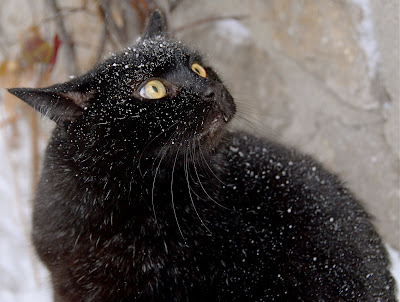 The Boris, aficionado of squirrel tartare

So I say, why not use that roadkill, or as I like to call it "free protein," for Squirrel Melts? They're "a nice weekend snack maybe while watchin' the football game." According to this expert squirrel chef below, it is very versatile because it's good hot or cold.

Grey squirrel is even flying off the shelves in the UK according to this article THE ULTIMATE ETHICAL MEAL:A GREY SQUIRREL. Best of all, it's free. And plentiful, if my backyard is anything to go by. And since the UK is known the world over for its fine cuisine, if they're saying eat squirrel, it must be good.

So get out your aprons and cookbooks shotguns and pickup trucks and hit the mean streets. If you're lucky enough to live in Toronto, it won't take long to get dinner out of that city park and on to your dinner table.

Not for the squeamish. Seriously, you have been warned.

And if you can't bring yourself to cook and eat one, there is always Roadkill Art.

I swear I couldn't make this stuff up if I tried. I don't know what's more strange. The guy making art out of roadkill, or the people paying more than 50,000 pounds for it.
Posted by A Novel Woman at 9:25 PM

I've decided to leave roadkill right where it is...on the road again. For the crows and for the turkey vultures. Hey. All God's critters gotta eat, not just me. That'd be selfish.

ROF,L! Only you could take a 'flat' subject and infuse it with humor. Bawhahahahah!

I love your stories. Seriously. Roadkill is not the first thing I think about when looking for a laugh, but I found it today!