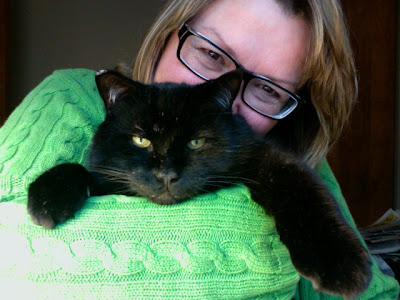 To many, he was just a cat. To most of my neighbours, he was a holy terror, but that was a bad rap mostly based on his tough guy name. Sure, he'd often sit on the window ledge across the street and taunt the two male cats trapped inside. They would hurl themselves at the glass in furious impotence while Boris licked his foot and yawned. He wasn't doing anything wrong because his cat logic dictated he owned that property long before they all moved in so in fact, they were the interlopers, not him. It was simple feline logic, as far as he was concerned. He was confused, almost offended, when the owner would emerge and throw buckets of water at him, but he learned to sidestep quickly. And it didn't stop him from doing it again and again, usually the minute she stepped back inside. 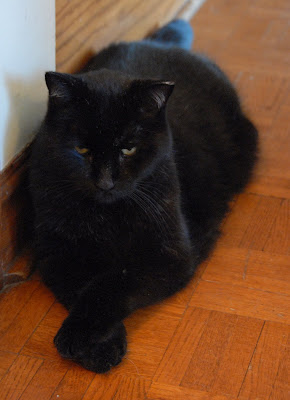 Another neighbour, a street gossip universally loathed for her no-holds-barred approach to spreading rumours, pulled me over one day and gravely reported that Boris hissed at her whenever she went up to him. I wanted to say "well, don't go up to him" but I nodded and tried, unsuccessfully, to stifle a smile. He was a cat with the gift of sentience and could see straight into people's souls, I reckoned.

I watched him move about the neighbourhood for years, and I know he was never the aggressor. Our little white cat Kicia, yes. She will take on animals several times her size, but not Boris. However, while he didn't actively seek out fights with other cats, he was stubborn in his refusal to back down when a fight presented itself.

As for humans, when Boris was outside, he pretty much ignored or hissed at you, depending on his mood. My next-door neighbour put it best; after she shooed him away from her porch, Boris turned as he sauntered away and gave her what she described as a "fuck you glance" over his shoulder. "That's exactly what it was, a giant 'fuck you' right to my face!" She laughed and added, "But I have to say, I really like the old bugger. He's got attitude, that one." 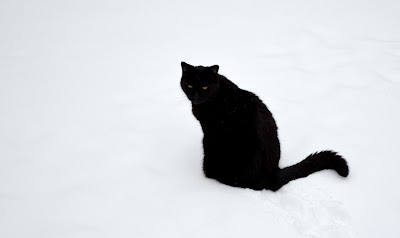 He was my boy, devoted, and deeply loved in return. And now he's gone. He lost weight for months, and in the past two weeks refused all food, even his favourites like raw salmon and roast chicken. Then he stopped drinking water, grew weak, and we knew it was time.

I miss him most in the evenings. During the day, he did his own thing, but at night he craved affection, purring loudly beside me while I read or watched TV. He was a solid cat in his day, huge, a mass of tightly wound muscle and soft fur with a thick tail the size of a stove pipe. He'd sit on my lap like a Buddha while I rubbed his belly, and tolerated the clipping of his claws without a struggle. When he slept it was deeply, usually sprawled on his back, back feet propped up on the back of a comfy chair, his front feet curled up like an otter's. He snored soft squeaks of pleasure, no doubt dreaming of bountiful fields of lame mice and hobbled squirrels.

When I came upstairs to bed, no matter what time it was, he'd bound up behind me, and enter the bathroom like royalty. He'd flop on the bathmat, always on that thin bathmat even when it was wet, I think because it held the whole family's scent. Sometimes I'd wiggle my finger underneath it and he'd get wild-eyed, then pounce. I could feel the strength in those massive paws, but he kept his claws withdrawn. Then he'd flop on one side as if saying, "I could kill you with one blow, but I won't. Because I love you. And I need you and your damned opposable thumbs to turn on the tap for me."

He'd wait until I was finished brushing my teeth then he'd jump up for a drink and watch the dripping water with the same fascination it has held for countless years. And every night, as I closed my bedroom door, he'd sprawl at the top of the stairs with a view to the front door, consumed with the very important job of guarding the family from intruders.

The hallway is empty now. And I feel it keenly. 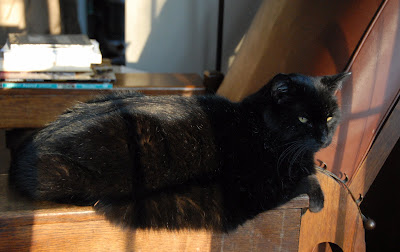 Boris was a gentle lion. I know I shall miss him my whole life. The pain will get easier to bear, it always does, but for now my heart aches for my loss. Silly, to mourn so deeply for a cat so old his black coat was threaded with silver, and so slow and weak he sometimes leaned into a wall for support. I have close friends who have suffered worse, much worse, losing husbands and children, but they have written to say they understand, because they too know the exquisite pain of losing a cherished pet.

I am bereft. But I will endure. 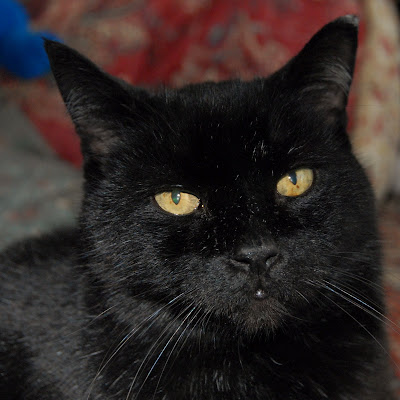 What a lovely tribute to a much loved member of your family. My deepest sympathies for your loss, darling Pam.

Aw, man. I am so sorry. I'm going to miss your Boris stories.

I still miss my old Clancy, who was a lot like Boris. Clancy has been gone for almost seven years now, and I've grown used to the hole in my heart. It will never go away, but at least now when I think of him I smile. :)

Well, I was a Boris fan as soon as I got to the part where he hissed at the neighborhood gossip. Every neighborhood needs a cat like that.

I'm so sorry for the loss of your Boris, but I'd be glad to come north and hiss at the neighborhood gossip in his stead. For you.

Oh, loved cat, Boris, rest in peace. And my sympathy for your great loss. Love is love is love...

My deepest sympathies... Boris sounds like he was a really cool cat (in more ways than one). When we lost our dog years ago, someone shared this with me. Somewhat cheesy, but it really helped. I think of it periodically and like remember my dog when he was happy and healthy, and look forward to seeing him again one day (hopefully... who knows?).

Just this side of heaven is a place called Rainbow Bridge. When an animal dies that has been especially close to someone here, that pet goes to Rainbow Bridge. There are meadows and hills for all of our special friends so that they can run and play together. There is plenty of food, water and sunshine, and our friends are warm and comfortable.

All the animals who had been ill and old are restored to health and vigor. Those who were hurt or maimed are made whole and strong again, just as we remember them in our dreams of days and times gone by. The animals are happy and content, except for one small thing; they each miss someone very special to them, who had to be left behind.

They all run and play together, but the day comes when one suddenly stops and looks into the distance. His bright eyes are intent. His eager body quivers. Suddenly he begins to run from the group, flying over the green grass, his legs carrying him faster and faster.

You have been spotted, and when you and your special friend finally meet, you cling together in joyous reunion, never to be parted again. The happy kisses rain upon your face; your hands again caress the beloved head, and you look once more into the trusting eyes of your pet, so long gone from your life but never absent from your heart.

Then you cross Rainbow Bridge together...

Aw Pam,
so very sorry to hear of dear Boris's passing.
He was a person in his way.
Sadly missed and never forgotten.
KDTR

My words can't possibly express how sad I am at your loss. But your life is so much richer for having loved him.

You have my deepest sympathies.

I'm so sorry for your loss, Pam. Boris sounds like a very special guy, and I know he had a happy life with your family.

Thank you, one and all, for your heartfelt condolences. Silly to be so upset over a rumply old cat, but there it is.

Pam, I'm so so sorry about Boris. I have a soft spot for rumply cats...my thoughts are with you.

Such a sweet tribute to the old guy (and I love that picture of you holding him). I'll miss him.

It's the rumply old ones that seem to stir us up the most. Heartsick hurts! Here's a big ((squnch)) from one pet lover to another, hoping you find your happy place again soon.

Thanks for sharing your remembrances. I like to read these while my cats (Nick and Nora) are still around. It makes me cherish my time with them all the more and will help when our time together ends. Thank you.

So sorry for your loss of Boris. I loved hearing about him.