My underwater camera broke on my first dive, but a fellow diver - Ian, from Manitoba - kindly forwarded a few of his shots and allowed me to post them here. Ian is like a floating encyclopedia when it comes to fish. (And music.) I'd surface from a dive and say, "hey, I saw this fat little brown fish that was round and fluttering its fins like they were wings" and he'd say "oh, that would be the Jamaican Burblydoodie fish also known as..."
I made that name up. I can't remember the name of that fish. I can, however, remember the barracudas which were curious and very identifiable, lobsters and remoras. Those, also known as suckerfish, kept swimming up my shirt the day I dove without a wetsuit. It's the fish you see in documentaries of sharks, where they are hanging on by their mouths and fluttering alongside like tiny flags. It freaked me out at first because I couldn't shoo them away. I don't like anything coming at me in the water, benign or not, and I definitely don't want making itself at home under my shirt. But I got used to them after the first dive. Mostly because I had on a wetsuit so they could only hitch a ride on my arms or legs. 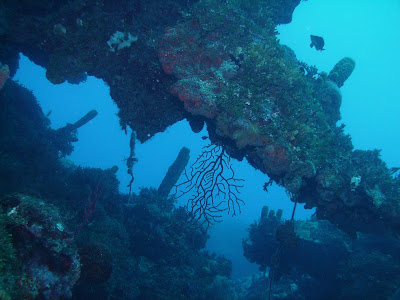 This photo sets the scene with a lovely coral garden. Every dive location has an evocative name, like The English Garden, Chubb, Cottage Reef, Coral Garden and even Peter Tosh Reef. If you don't know who Peter Tosh is, watch this. (You can thank me later.)

Now you know who Peter Tosh is. Or rather, was. But as the saying goes, his music lives on. 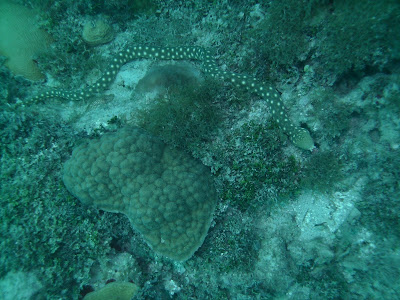 Sea snake. Yes, the sea has snakes. I saw a couple of moray eels, too. They're pretty cool. 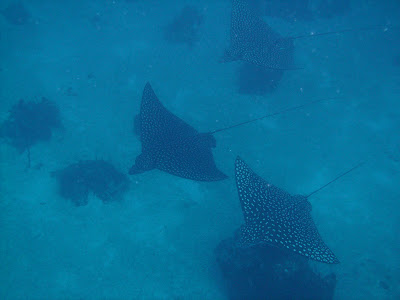 Eagle rays with their lovely spots. 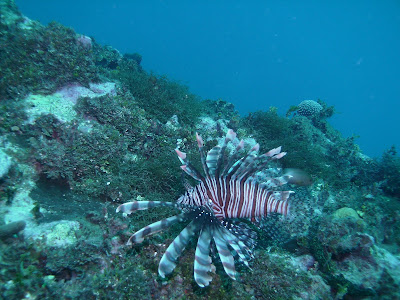 And this is a lionfish. Don't be fooled by its beauty. It is a deadly and invasive species with toxic spines and it has become the scourge of the Caribbean. One sting can result in nausea, difficulty breathing, paralysis, convulsions, even death. And they can sting right through a diving glove. Our dive masters admitted they'd all been stung and had now developed an immunity. I'm not willing to test that theory.

So how did these fish end up in Jamaica if they're from the Indo-Pacific? Apparently some doofus released a handful of them out of an aquarium and into the water off the Florida coast after Hurricane Andrew. They then migrated to the Caribbean seas, where they are flourishing and gobbling up all the fish, crabs and other creatures lured over by its fluttering fins. They are threatening the health of the reefs as they can eat dozens of smaller fish per hour. One lionfish caught by our divemaster had 50 fish in its belly when caught.

There are now organized lionfish hunts and fish fries (apparently, lionfish are quite tasty once the poisonous spines are removed) and the rule is, if you see one, you kill it.

Me, I'll stick to chicken of the sea. I'll leave you with this: