Country Walk In the City

I am lucky enough to live in a city with a mountain in the centre of it. I'm also lucky enough to live close enough to be able to walk to the entrance of the 200 hectare park that surrounds this mountain. Within minutes, of climbing the stone steps up the road, I'm surrounded by trees and birds and I can almost forget I'm in the middle of a busy city. It's remarkable.

This park was designed by the same architect who designed Central Park in NYC, and it's been a park since 1876. There are monuments and sculptures, you can picnic or cross country ski, depending on the time of year. You can pretty much get to the park from any street downtown. Just start walking uphill!

I took these photos last November, just before the big snow. 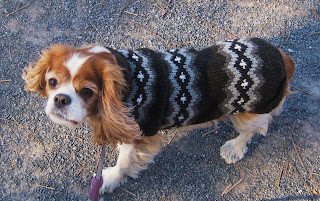 Yes, that is a hand knit sweater on my dog. No, I did not knit it myself. Yes, he needs to wear it. No, I am not embarrassed to walk a dog in a sweater. Yes, I am lying about not being embarrassed. What's worse is that he now needs boots to handle the salt on the sidewalks. What's next, a bonnet? 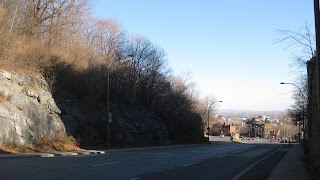 I live at the bottom of this hill. Yes, I walked all the way up this hill to get to these steps. 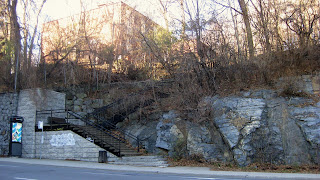 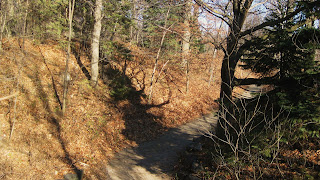 One minute you're dodging cars (and believe me, in Montreal, you literally dodge cars. Pedestrians are seen as some kind of Hunger Games tryout) 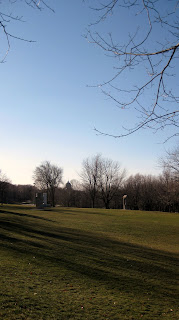 And the next minute, you're walking on fields of green. See the top of St. Joseph's Oratory in the distance? It's on the west slope of the mountain. 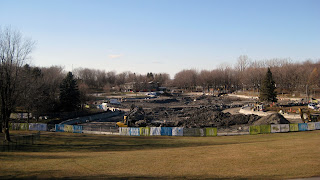 Beaver Lake was built in the 50s. In the summer it's a pond, and every winter there's skating except for this year because it's undergoing a major renovation. Otherwise I'd be skating there every day. Or thinking about skating there occasionally, or maybe watching other people skate while I sip something warm from a flask. But at least I would have the option.

Now you know why I always carry seeds in my pocket.  Chickadees are the Golden Retrievers of the bird world. 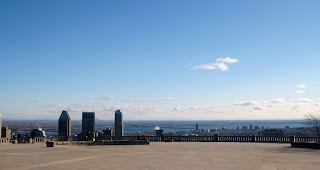 Then you come to Mont Royal summit. 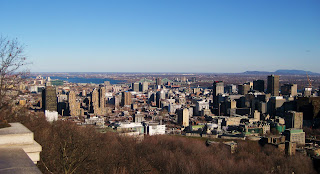 And you are rewarded with this view. 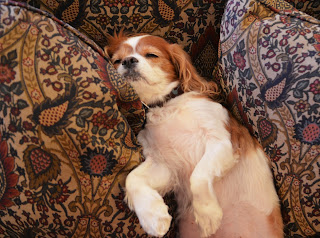 And then we come home and do this.

This is a video I took which shows you what the summit looks like in the fall. I suggest you turn down the volume unless you want to hear the guy hocking a loogie right next to me. I mean, seriously Mr. Fancy Pants jogger? You had to do that right beside me while I'm filming?

Now, if you're wondering what the same park looks like this in the winter, check out this video of Seb Toots as he snowboards in this park, sometimes on the same paths I walked. Unbelievable. Maybe I'll try this next time.

Nice. Many older cities have these islands of solitude, but most seem to have been created in the 40's and 50's, or earlier.

We need them even more now, but I guess public spaces are now viewed as inefficient use of urban land.

I am SO jealous. And why don't my chickadees come to my hand when I'm holding seed?

You have to call them in your head.

And use black sunflower seeds. They love those.

I loved the pictures and Seb Toots snowboarding is almost unbelievable!
You are making me love my city even more with your amazing photos and descriptions. Merci Pamoiselle!
KDTR

My kids have been to that park! They raved about how wonderful it was. Is there a big mansion some place close to that?

There's a big stone building where you can have a coffee etc. Many mansions on the mountain too. Most visitors love our city. It's an incredible place.

The kids loved it. Someday, I'll take a drive up there, and I'm sure that I will love it too!

Yes, you must! I'll have the chocolate croissants warming in the oven.