A few months ago, I went on a walking tour of Montreal, led by Ingrid Birker at the Redpath Museum.

This was a specialized tour, called the What Building Stones Tell: A Walking Tour Focusing On The Fossils, Rocks and Minerals of Montreal Buildings.  We examined "corpse sediment" like these puppies. (These are not literally puppy corpses. I felt the need to clarify, given the title.) 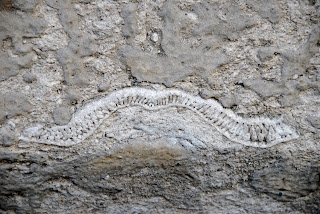 Sure, there were lots of 500-million-year-old fossils in some lovely old buildings, including some fancy-schmancy stone that is so rare, it was used for our parliament buildings and, lucky for us, a very luxurious apartment building called The Chateau built in 1925. So how did this stone end up in this building if it was so difficult to come by? And also, I discovered, in the Alcan Headquarters just down the street? Turns out the architect had a family connection to the quarry owner in Manitoba. Once again, in old times and new, it's all about who you know.

Who has all the hot Montreal geology gossip you need to know? Booyah! Right here, folks.

But, common woman that I am, the thing that captivated me even more was something called a "cat's paw" brick. Back in 1870 at this local factory, bricks were laid out in the sun to dry. It would appear the brickyard owners had a cat that liked to wander over the wet bricks and leave its mark, as it were.


If you look closely at the McGill Faculty Club, for example, you'll see many bricks with the cat paw mark on the side wall.

There is even a local group comprised of builders and architects who call themselves The Cat Paw Club. They walk around the city looking for specially marked bricks to add to their list.

Of course, I felt compelled to do the same. And looky-looky what I found, including on the side of the McGill Theology Department.  Coincidence? Or divine intervention? 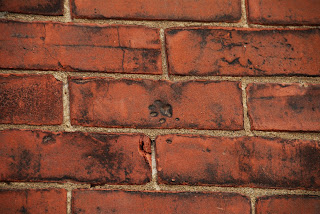 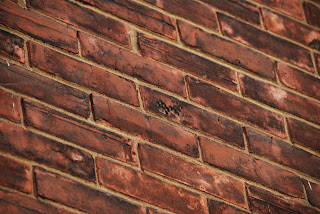 Unfortunately for my family (as was the case recently on a dinner outing) if I am at a prime location and I spy a red brick building, I am now compelled to investigate - down back alleys, along side streets, wherever my intuition and curiosity takes me. Kind of like a four-legged friend I used to know?

Oh, and cat paw bricks are not a recent phenomenon. This Roman brick is over 2,000 years old, and was found at Fort Vancouver in Washington. It probably got here as ballast in a Hudson's Bay Company ship in the 19thC. Read about this special cat paw brick HERE.
Posted by A Novel Woman at 11:59 AM

This is so awesome I can't believe it. I love the way you ferret out these little details of your corner of the world.

ok, this is awesome. now i have to compulsively start looking at brick buildings.

Still so jealous here. We're going to be moving in the next year or two due to the DH's job moving and if we weren't so much car people, I'd force him to live in a little town where I could walk around and find things like that. We have lots of historical towns here. I wanna live in one!

Side note: Did you see the several hundred year old manuscript with the cat paw prints in ink? Very cool.

Love it! How like a cat to stroll around like they own the place (which, of course, they do!) :)

I did see that manuscript. Cats are the same the world over, no?

Speaking of critters, look what I found out about squirrels...

The squirrel as a symbol of Satan? Yup, I can get behind that.

Tim Bedore? Animal Conspiracy? Lots of stuff on your nemesis, the squirrel.http://www.vaguebuttrue.com

I can't believe I hadn't. known about this! Will keep an eye out...

Deniz, once you start, you won't be able to stop. Let me know if you find any new ones!

I have a brick in my collection that may show both a cat and a dog print - ( maybe !)

Please copy and paste the link below.

Now, I envisage the brickworks cat,employed to keep the mice levels down, being chased by the brick moulders dog across the top of the ‘green’ bricks which had just been laid out to dry.