Oh, Vancouver, how you seduce me with your mountains and fresh air and vegan lifestyle. I'm so used to city streets, arguments over politics and smokers on every corner. This is what I saw when I pulled the curtains open every morning.

Got home last night from five invigorating, exhilarating, exhausting, but very fulfilling days at the Surrey International Writers' Conference. Amazed at how this conference can leave one wrung out like an old dishrag and leaping around like a spring lamb at the same time.

Spent days and evenings with friends and authors I know well, and I made some new friends, too. I flew there against my doctor's advice, and it was actually a bit touch and go before I left. By my departure date, I felt like things were under control and that I'd beaten down the beast, until I realized I hadn't.


Last Saturday night was a tad rough, and I missed what everyone later said was the BEST keynote speech of the conference given by Jim C. Hines, as well as Jack Whyte's rendition of Mud, Mud, Glorious Mud.

(stifled sob into my fist)

I'm hoping someone taped both of these events, and posts them on YouTube. I did, however, make it up to the partay room later. I have to be at death's door to miss a good party. This is what happens at the partay. That's all I can tell you, because what happens in Surrey, stays in Surrey. 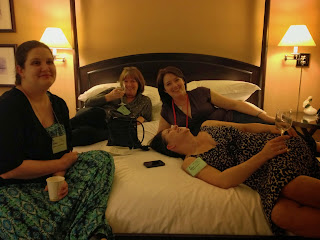 Tyner Gillies, the Wonder Mountie, won the non-fiction prize. He wasn't told in advance as most winners are, and he was clearly blown away. He blinked back tears as we all pounded him on the back. I just love this guy, and his story is both moving and unforgettable. We passed around a copy of the anthology at the table so we could read his entry, and we were all in floods of tears.

There are Many Things Afoot. Most I can't talk about right now, some have to do with me, others about dear friends. Got some great feedback from an agent who requested material, and also from a presenter who asked me to send her some of my essays.

I laughed, I cried, I ate a lot of chocolate. Just the way it should be.

My husband was late to pick me up at the airport in Montreal, so I passed the time by chatting to airport staff, i.e., the guy directing people to the taxi stand. A friend of my daughter walked past, without saying hello to me, but then texted her and he said, "Just saw your mom at the airport. She was asking a black guy what part of Africa he was from."

Okay, for the record, here is the complete conversation.

Me: "What an interesting accent you have. Where are you from originally?"

Me: "Cool. What part of Africa are you from?"

(See? This is called context.)

Me: "So, how do you like our Montreal winters?"

Him: "Oooooh, I will never get used to those. They are bad, bad, BAD."

Us: Much laughter and banter.

In other words, I do NOT go up to random people and ask them what part of Africa they're from.

They were from France. You can tell from their accents, which makes it easy for me to understand as it's the French I learned in high school. They looked similar, thirties, maybe early forties, same slight builds and casual chic clothes, tee shirts and leather jackets. He had messy curly hair, stubble and a scarf casually knotted around his neck and she was pretty without makeup, though she looked tired. They were clearly in love, but not in a gross P.D.A. kind of way. It was as though they were magnets; one moved, then the other leaned in that direction. They reminded me of the French movies I watched in the seventies. You just know they have great sex, probably all the time, because they were both so sensual and beautiful. (And then afterwards, they lounge in bed with croissants and cafe au lait and newspapers, and probably a cat or two.)

It was as though they were attached by invisible strings. It was mesmerizing.

He would put his hand on her leg while he read, and she would put her hand on top of his hand, and lock her fingers into his. He fell asleep on her shoulder, and she rested her head on his. They talked softly to each other, murmuring, heads together, never raising their voices to be heard.

When the plane landed, and everyone jumped up and scrambled for their bags in the overhead bins, they stood in the aisle, faced each other and melded into one, as though no one else was there and they were simply one person. She looked into his eyes, and he into hers. He brushed her hair away from her face, and noticed the pendant on her choker was askew, and gently straightened it then brushed her hair from her cheek. They kissed gently, softly. She touched his forehead with hers, their eyes closed, and eventually they burrowed in each others' necks, as thought they were puzzle pieces that just clicked into place. Have you ever seen horses in a field, just resting, heads and necks entwined? That was this couple. I could not stop looking at them (not that they would have noticed me staring.) They stepped out of the plane and walked slowly to the baggage area, hand in hand, swaying in time.  It was a sight to behold.

Anyway, they disappeared, my husband pulled up in the car, and we headed to the local bistro for drinks, succulent oysters on the half shell, and steaks and frites. The air is crisp in Montreal, a big change after the warm sunny weather in Surrey.

Now we have frost, and snow up north. 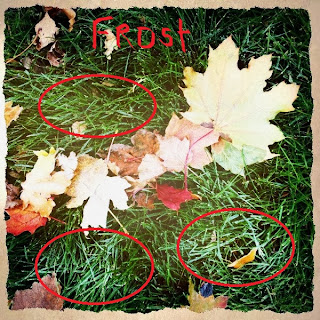 But I have my Buddy back, and he, clearly, has me in his sights once again. I think in his tiny walnut of a brain, he and I are like that couple on the plane. 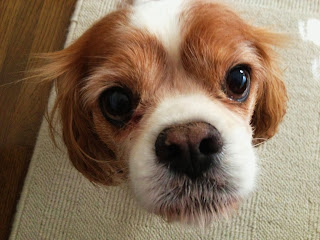 Awww... I sat next to a nice Canadian couple on my way up--not quite as enchanting as your French lovers, but he called me 'madam' which I loved :)

It was wonderful to see you, and I'm so happy to hear that you're feeling better. I did record most of Mud, and will email you the file. I didn't think to record Jim C. Hines, and I wish I had.

Virtual hugs until I see you again!

Aww! Love the way you told that story. Almost makes up for me missing Surrey... nah, no it doesn't. Must make it out next year!

Thanks, Lara. Miss you already. Talk your mum into returning with you next year, okay? xo

Deniz, you really must come to Surrey. It's a special conference.

This made me weepy. Miss you so much already!

Need To Increase Your ClickBank Commissions And Traffic?