I needed this today, and I suspect many of you do too, after hearing about my tragic raccoon tale, which still has the capacity to make me cry. But this fine morning, I bring you a good news nature story.

Despite the fact that I deliberately keep our cottage windows dirty to prevent bird collisions (confession: the city windows are dirty from pure laziness) there is still the occasional accident.  My husband protests but a) he's not the boss of me and b), see a).

This morning, as I sat outside on the deck reading, a young hummingbird zoomed right above my head straight into the glass, then dropped with a thud at my feet.

I hustled Buddy into the house and we left it alone for a few minutes as it writhed on the deck. Experience has shown that the first few moments will determine whether a bird will live or die. Sometimes death comes in seconds if it breaks its neck, but more often than not, they suffer a mild concussion and recover quickly.

That is, if the squirrels, or Buddy, doesn't get to it first.

Then it becomes breakfast.

So this poor little hummingbird struggled on its back, wings sprawled, fluttering in a circle. But suddenly it righted itself, a good sign even though its eyes were still squeezed shut. Definite concussion, but still.

Buddy and I watched together from inside the cottage so as not to frighten it, but then a red squirrel showed up to spoil the party.

I ran outside and shooed the squirrel away, then I bent over the hummingbird to check on it. It suddenly flew into the air, hovering like a little helicopter in front of my face, the buzz of its wings so incredibly powerful and strong for such a tiny creature. I instinctively held out my hand, and incredibly, it landed in my open palm! 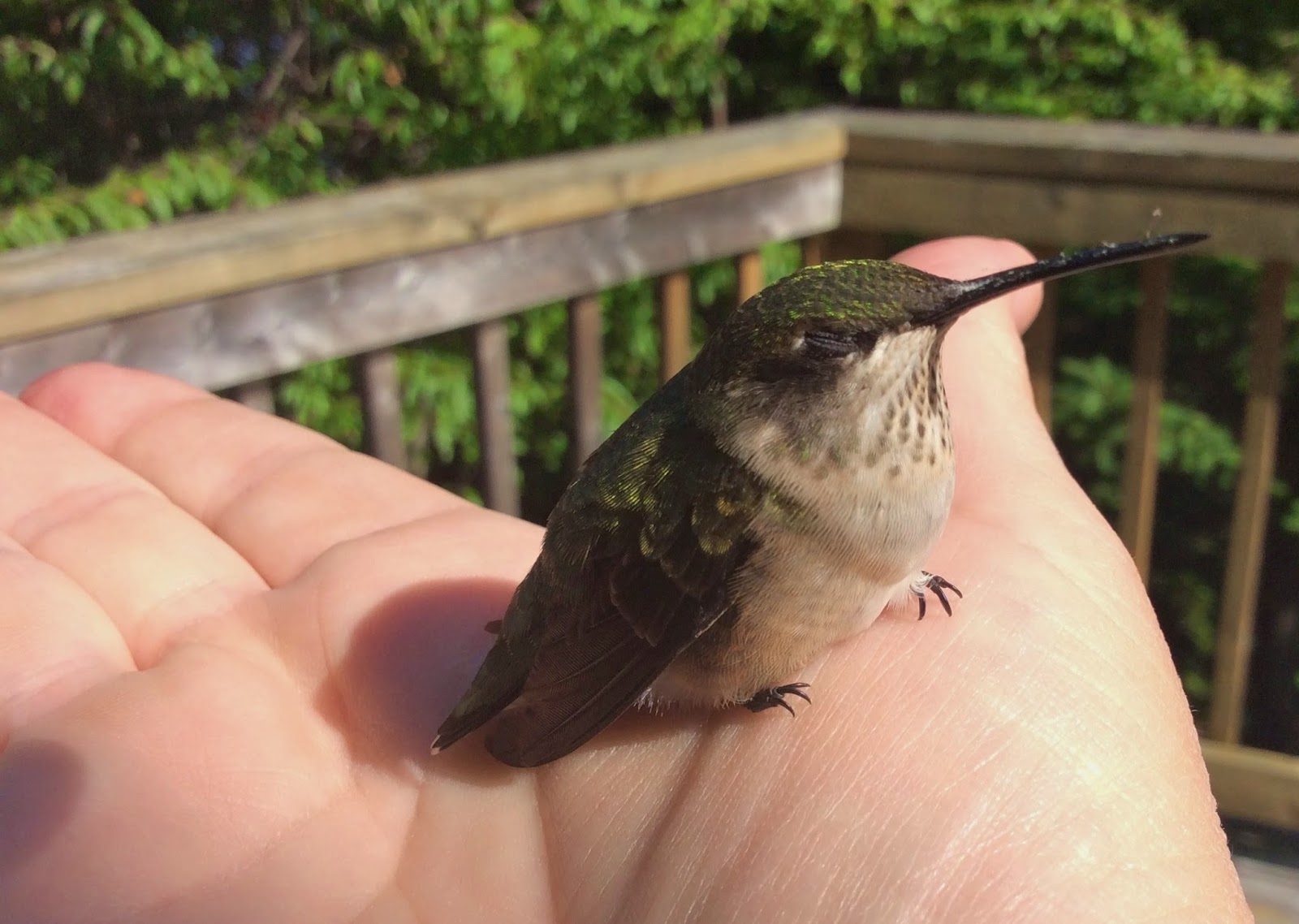 I couldn't believe it. I stood stock still, thinking it was going to take off at any second. My camera was inside, as was my phone, but I'd been reading on my iPad (okay, I was playing Candy Crush) and I thought I might be able to snap a photo if I moved quickly and carefully.

And by that I mean like a stealth ninja.


May I say, do you know how hard it is to take a photo whilst juggling an iPad with one hand? With one non-dominant hand? With a hummingbird balanced in the other hand?

I struggled with the damn electronic demon and cursed its stupid design, which slipped and flipped each time I tried to hit the play button (yes, I know about the other button, but again, one-handed, holding a bird) all the while trying to a) not drop it, b) startle the hummingbird.

I did get it on film. The little guy was in no hurry to vacate his warm, cushy home. I had to coax him onto a nearby cherry tree branch. Within a minute or two, he flew off, unfazed.

You can watch the video below, or I recommend you go to YouTube HERE and watch it on HD and on full screen.

Or you can watch the tiny version here:

Oh my God! Pam! That is truly amazing! So perfect. Wow!!

OMG! You managed what I haven't in 12 years of trying! My feeder is about 8 inches from me on the other side of the screen next to my couch. They hummers have gotten used to me and when I'm sitting outside on the deck now, they'll land next to me, but haven't landed on me yet.

I'm so glad though the little guy survived, but that's an adult. Babies are half that size if you can imagine. Aren't they awesome little creatures? AND YOU HELD ONE!!!

Awwww. Poor little guy. But you did what you could. Sometimes, nature really is cruel and harsh and it's not your fault. :-(

Oh wow, that is awesome! So glad he (she?) had a happy ending!

Absolutely enthralling! And cannot believe the little guy hung out on your hand as long as he did! Off to mix up some food for the hummingbird feeder outside my studio window.

I'm so glad that the hummingbird is okay! And how lucky that you had your iPad to get it on video. Great footage!