I was born in the fifties. Helicopter parents were non-existent. Most of our parents were barely out of their teens themselves, so benign neglect skirting the cliff edge of negligence was par for the course, which was usually where you'd find the young fathers on weekends. "Go outside and play!" was our mothers' mantra. "And don't come back until I call you for supper, the street lights go on, or you're bleeding." The moms slathered on baby oil, held reflectors under their chins and discussed the merits of Toni® home permanents while we made our own fun.

Someone always had a soft red, white and blue rubber ball, or an India rubber ball which bounced a lot higher, but left bigger bruises after Dodge Ball. We played Red Rover, Red Light Green Light, Tag, and a game with linked elastics pilfered from the junk drawer. Some called it Chinese Jump Rope, but it was actually a Korean game called Gomujul. We called it Jumpsies.

Every girl had at least one skipping rope and knew several songs. Taking a turn in Double Dutch took mad skills. You had to choose the exact moment to leap without getting snarled up or neaned in the noggin, as my grandmother put it. Then you'd sing:

I'm a Girl Guide, dressed in blue.
Here are the actions I must do.
Stand at attention, stand at ease,
Bend my elbows, bend my knees.
Salute to the captain,
Bow to the Queen,
Turn my back on the dirty submarine.

Ordinary Movings was a game you played alone. You'd bounce a ball against a wall, and call out and perform various actions. There was a tweedle and a twaddle move at the advanced levels. We'd also pilfer our mother's lingerie drawers for a single stocking, load it with a ball, stand against a wall, and whip it back and forth over our bodies while reciting:

Have a cup of tea, sir.
No, sir. Why, sir?
Because I have a cold, sir.
Where'd you get the cold, sir?
At the North Pole, sir.
What were you doing there, sir?
Catching polar bears, sir.
How many did you catch, sir?
One sir, two sir, three sir...

And....more bruises. Hula hoops weighted with sand were used in contests difficult for girls like me without curves but easy for the older girls, who could mesmerize the boys as though they'd tossed them opiates.

Everyone knew "One, two, three O'Leary" and:

Except we changed the "nice young man" to "ice cream cones" because ice cream always trumps young men when you're seven. We played with intense focus and competitive spirits, and there was strict enforcement of the rules, no exceptions, even for younger siblings.

There were apple trees to climb in the orchard next to us, forts to build bikes to ride and roller skates to be screwed onto sneakers with metal keys. If we felt really ambitious, we'd organize an impromptu game of baseball on the local school diamond, and grab mitts, balls, bats and players as we ran like a pack of feral dogs to the local park. If fall meant games of conkers, summer was for marbles, and winner-take-all tournaments. I had excellent hand-eye coordination and killer instincts, so I usually came home with my purple velvet Crown Royal bag filled with booty (which had a whole other meaning back then, as did thongs, which were worn on our feet.) It drove my mother crazy when I swaggered home, as she found competition unladylike. All's fair in love and marbles, I'd argue.

If we were lucky enough to scrounge up a nickel each, we'd head to the local general store where I'd freeze with indecision. I could buy one bottle of Coca-Cola, snap it open on the side of the big red cooler, and it would be gone in a couple of gulps. Or I could get one Popsicle, or a Jet (chocolate covered orange sherbet), or a lemon fountain with a licorice straw, which meant hacking up a lung full of powdered sugar. I always opted for penny candies, because a nickel bought a lot. As I shifted from foot to foot, the clerk would fill a small paper bag with black balls, Pixie sticks, Bazookas, wax lips, candy buttons, licorice pipes, BB bats, and sometimes, a bonus bag of salted sunflower seeds. We'd head home, pile on the hammock, crack the sunflower seeds with our teeth and spit shells into the grass, as we chattered like the birds overhead.

Eventually street lights would flicker to life, and our mothers would holler for us to come in to bathe, and slather our sunburns in Noxema cold cream before bed. But we'd always sneak in one more game of hide and seek on the way. 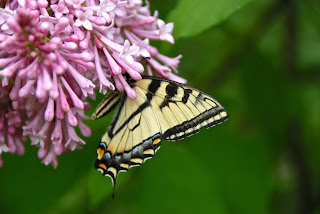 I was a few years behind you and a half a continent away, but we played Red Rover and I had at least one of those red white and blue striped rubber balls!

I did not live in town. I lived in the country where my only playmates were my brother and sisters. But we too played outside. We stayed in the woods, or traveled up our little stream, and we did not come home until supper. It was a magical time, really, but our children will not know that freedom.