Did you know I went AWOL? 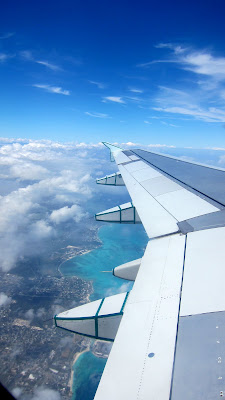 What, you didn't know I was gone? I didn't want to say anything, especially to those of you stuck shoveling piles of snow, but I was in the Bahamas for a week. Sunny, breezy, beautiful Nassau. That would make me a Bahama Mama (also the name of a most wonderful drink with rum and fruit juices and rum...) I can't believe my husband and I have been married for 25 years and we've never gone to the Caribbean before. I had this idea that sun and beach and tropical breezes would be boring. Sheeyah. What an eejit. 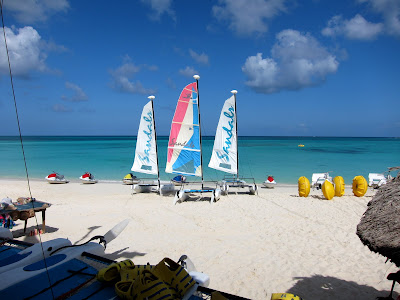 We chose to go to Sandals, i.e., No Kids Allowed i.e., More Fun (I was going to say more civilized, but this turned out to be Not The Case.) This was a smart decision, as evidenced by the hordes of crabby, screaming children in line at the airport when we left Montreal at 4:30 a.m. Thankfully most of them were headed to Atlantis, a place I now know I will never, ever, EVER visit. Despite being at the airport more than 2 hours early, we came very close to missing our flight. They plucked us out of the security line-up and we rushed to the gate just as the attendant was poised to give away our seats. A quick uneventful three hours later and we landed in paradise. It even came with its own peacocks. (I regret not bringing my good camera, so had to resort to the point-and-shoot.) 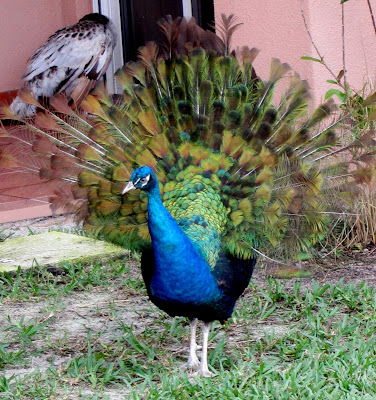 My husband talked me into scuba lessons on our first day. Seriously, moi in a wetsuit? My kids said I looked "buff" (snort) but hey, a wetsuit isn't about making a fashion statement, it was about keeping me warm. And looking like a pro. Okay, so I look like a doofus, but a professional doofus.

I did 2 hours of instructions with Wenzel (my new hero) in a small, deep pool behind the dive shack. I needed to learn how to clear water from my mask, how to retrieve my emergency back-up mouthpiece, how to signal I'm out of air and take Wenzel's back-up air. (Say what now?) And how to never, ever, EVER say "pop up to the surface." It's always "ascend gradually." The next morning, we hustled into the dive boat with our gear and we were off to a location way out in the ocean for our first dive! 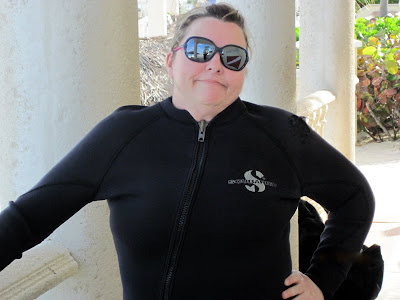 These are the jackets and tanks we had to strap ourselves into, below. (I have no idea who that random guy is waving at me. But he seems happy enough.) I had to add a weight belt, then strap myself in to the jacket attached to the tank, and heave myself to the back of the boat which was pitching about in the waves, don my fins, place my mask and mouthpiece and throw myself into the ocean. I won't lie. I was terrified. Almost paralyzed with fear. I almost drowned when I was five, and I can still recall what it felt like to breathe in water instead of air. I really had to fight the urge to climb back into the boat. But I "descended gradually" and landed on sand about 25 feet down, then kneeled and waited for my Wenzel. 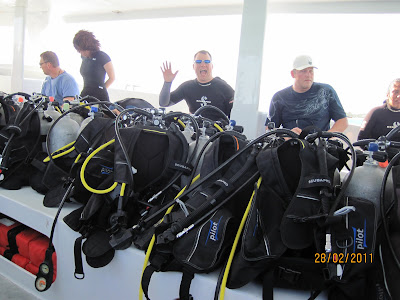 Now I wish I could show you what happened next, but my underwater camera is only good for 10 meters (33 feet) and we ended up around 40 feet down so I didn't want to risk having the thing implode. As soon as I started the lazy swim to the wreck (a tugboat that went down 10 years ago) and I saw a 4 foot moray eel in all his undulating glory, I was completely smitten and forgot to be afraid. We swam all around the wreck, accompanied by tropical fish flashing brilliant colours, including these big blue parrot fish. At one point, Wenzel dropped some food in the water right in front of my mask, and my head was suddenly surrounded by about a hundred fish, all nibbling and flicking right in my face. I put my hand up and felt their sleek bodies and smiled so hard I got water in my mask! The parrot fish were especially cool. They look like they have ill-fitting dentures, don't they? Doug could fix that in a jiffy.

This is the view from our elevator. Nice way to start the day, no? 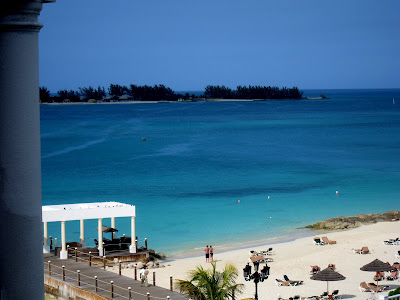 This is the view from the pier, at the end of each day. Le dramatic sigh. 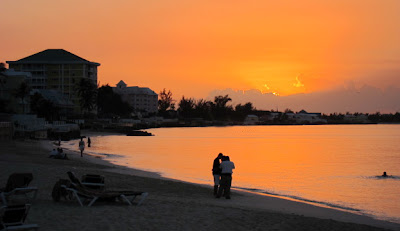 We swam, we relaxed with books (and my new Kindle, yee haw!) and ate cracked conk and coconut shrimp, we sang in the piano bar in the evenings, danced to a reggae band, sampled drinks with names like Miami Vice, Hummingbird, Caribbean Breeze, Bahama Mama and Papa, and the Mudslide...

We met a lot of great people, including a couple of endodontists from Seattle, Washington. Turns out that before they moved to the U.S., Terrance grew up in the next town over from us, literally minutes away and went to McGill, where Doug studied and eventually taught. Then, in a really crazy twist, we discovered a few days later that one of our hygienists is Terrance's second cousin and his uncle is Doug's patient! It really IS a small world.

We had such a great time that we booked another vacation for next year. And a few couples that were there are going to join us at the same time. Why did we wait so long to do this?

You tell me. Do we look happy? 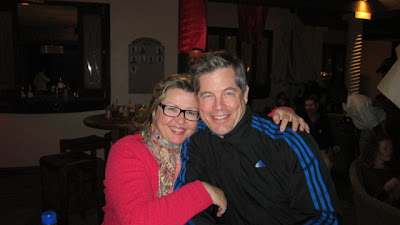 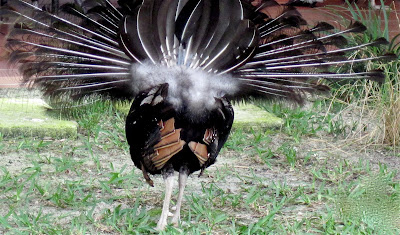 I'm so glad you had a great time! I may try and convince Biker God to go to a kid-free resort - it sounds like the only way to go when you don't have kids :)

Love it! I wish I could talk Charles into doing something like this.

Julie, DO IT. Most of the people in the resort were closer to your age anyway. It were fun.

Wow! When you disappear, you do it right!

So, here's the plan: the first part of my book is set in the Bahamas. So when it comes out, you need to go back to the Bahamas, and take a picture of yourself reading my beach book on the beach where it's set! While drinking a Bahama Mama, of course. And ogling the "scenery." ;)

Oh fine. Be that way! *she says while she brushes off yet another five inches of snow and awaits the ice storm starting later tonight*

I'm SO glad you had a good time.

It sounds like you had a lovely week! I'm so glad that you could get away and enjoy yourself!

I'm sure you were way cooler than most of the people there :)

Yes, Scrabble. But my Hotmail isn't work - I'll try again in the morning.

Linda, which beach is it, so when I make my reservation I can be sure to get the right beach. Who is going to tell my husband of our plan, you or me?

NM, if it makes you feel any better, we had a mega-snow-dump yesterday and another mini-blizzard is on the way for tomorrow.

Linda, that's the spirit! I'm taking you with me next time.

You know what I love about you? That you did not go on and on about the wonderful sun and the warmth and laying on the beach. Nope. Our girl began talking about scuba diving. The wetsuit was to keep her warm.

When you are trapped in the frozen wasteland, the last thing you want to hear is somebody gloating about warmth and sun.

Oh, darling Debby, I am currently trapped in the same frozen wasteland. More snow predicted overnight and then freezing rain to cap it off. I might need that wetsuit again just to get groceries.

This from the broad who lives in Vegas.

GORGEOUS pics! Love the ones of you in the wetsuit and later with Doug--What a cute couple!

I am so happy you guys had fun. Been to the Caribbean once and had a blast. Tried being cool and going to the nude beach, but couldn't stop giggling so I had to leave.

Wow! You guys look like you had a great time! Mmmm, beach... sunshine... so jealous...
Hey look, my word verification is "corse". As in La Corse. As in, beach vacation, Corsica, here I come!

Deniz, don't ignore what the universe is trying to tell you. Go forth, my friend, and tan.

Hi Pam,
I am so happy you both got away. The photos look great. I love the picture of you both. It is wonderfult you are returning next year.
Deb