Around 4 a.m. I was roused from a deep sleep by the sound of my pacing, frantic dog. Usually this means imminent diarrhea or vomit on our bedroom floor, often the result of eating someone's sock or thong, or more recently, two insoles from my son's running shoes. (Oh, and three of those waxed paper squares that separate cheese slices. Did you know, as I do intimately, that wax paper squares don't break down in a dog's gut, but twist into long rolls resembling shit-stained cigars? But I digress.)

I staggered downstairs in total darkness with the Budster right behind me, and flung him outside under a full moon (no pun intended.)

As he scampered across the snow-covered deck toward the backyard to relieve himself, I saw the real reason for his distress - hooked to one of his long, fluffy ears and trailing beneath his belly and through the snow was my black padded bra. Realizing that he was seconds away from peeing all over it or worse, I flew out the door after him, and ran barefoot through the snow to retrieve it.

I have learned my lesson. No more flinging my clothes onto the floor, not even after a party that goes on until 3 a.m. 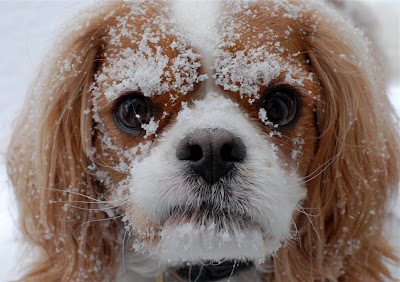 Little face there is cuter than a button! (What does that mean, 'cuter than a button? I mean, I don't know that I've ever seen a button on someone's blouse, lapel or butt of their jeans and thought to myself, how cute. Perhaps it is the word itself ~ But-ton.)

Whatever, that cute as a button pup you've got there is certainly precious. The fact that he is into women's unders is all the more ~ well, sweet.

You're right about the good housekeeping! I learned my lesson long ago to never EVER think, hiding my panties on the bottom of that dirty pile of clothes collecting on my bedroom floor, won't be found in the middle of the living room when company arrives!

Yup, although in my case he did just get my bra hooks tangled in those long ears of his. My friend told me her dog had to have surgery after swallowing three tampons.

It's the little ones around here that chew on things they're not supposed to. Our big Evie, now she's the eejit. She's been staked out below our tree, since the day we put it up. Waiting, I think, for those little sparkly lights to jump off and scurry across the floor. She is OBSESSED with ALL flickering lights!

I can't tell you how many multicolored poop piles we've found in our backyard thanks to DD2's inability to keep her thongs locked up.

I was rolling with this post though. Too, too funny!

Buddy felt that he needed support.

And this story! Short but sweet. Sorry, not laughing *at* you, you know that right? [bg]