There are certain activities associated with youth, like questioning authority, and then there are other activities associated with our golden years, like knitting. The lines between the two are now blurred, so hang up your shawl and grab your needles because baby, knitting ain't just for grandma anymore. Knitting has taken on cult status, and young and old alike are going guerrilla.

I started innocently, learning to knit when I was a mere child, all of eight years old. Well, technically I corked before I knit, using a knitting spool. This is a craft that has been around for a hundred years, which is odd given its limitations. Take a large wooden spool, hammer four nails in a square shape around the hole, then "knit" around in circles to create a tubular chain through the middle. That's corking in a nutshell.

This is about as practical and esthetically pleasing as tongue depressor sculpture. You always end up coiling it into a potholder, or in my case, many potholders. My grandmother - a master knitter who could watch TV, chat and knit a sweater at breakneck speed without looking down at her hands - was exasperated at the energy wasted on something that resembled knitted tapeworms. She taught me to knit properly and with purpose.  I never matched her skill, but I produced a decent scarf or two. I eventually abandoned this gentle pastime in exchange for more adventurous and age appropriate pursuits like disco hopping. Knitting didn't fit my image in the 80s, but maybe it would when I got to my 80s. 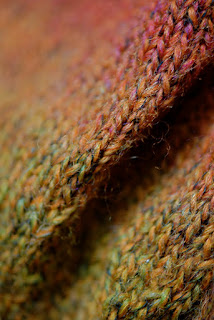 My 20-something artist daughter convinced me to pick up my needles again. She attends university on the east coast and she taught herself to knit. Forget grandma, Google is the new mentor. Cast on, knit, purl, "tink" (knit spelled and performed backwards in order to fix a mistake) - the basics and more are all on YouTube now. She quickly mastered the art and completed complicated hats, scarves, fingerless gloves, even socks for everyone on her Christmas list. I did not advance as quickly and made panicky Skype calls with my work-in-progress - usually a scarf (okay, always a scarf) - held up to the camera. 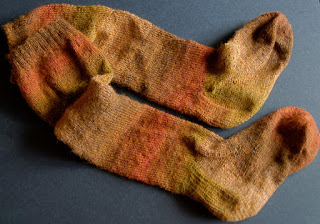 Requests for more raw material meant I had to make regular pilgrimages to the yarn shop. One look around told me these are not the days of my Nana's knitting. Forget garish acrylics and scratchy wools. There is now a plethora of soft, vibrant fibres - bamboo, silk, organic cotton, soy and hand-spun and hand-dyed from a variety of sheep and goats whose pedigrees are lovingly listed on the label alongside their portraits and pet names. (I kid you not, no pun intended.) The colours are enough to knock your hand-knit socks off - luscious jewel tones, earthy shades from nature and screaming electrics from Japan.

And if you have any remaining doubts about knitting being a gentlewoman's craft, let me introduce you to the concept of Yarn Bombing.

The Before, Pre Yarn Bombing

To the uninitiated, yarn bombing is where genteel meets renegade; its the art of knit graffiti or "textile street art." An international guerrilla movement, it inspires people to take up the knitting needles and along with stealth, a disguise and a dose of chutzpa, work for total cosmic yarn domination. Fighting for political change, when expressed with yarn, becomes a message delivered with a cuddle. All over the world, girls and boys yarn bomb; even grannies are leaving their wooly calling cards in random places. It grabs the notion of knitting as a gentle craft and knocks that theory on its fuzzy behind. 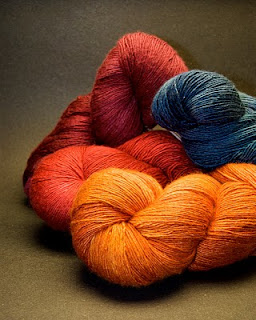 It's easy. You just target a post, bike stand, bench, anything that needs yarn beautification, and covertly cover it with a hand-knit item. It can be as simple as a tiny square on a chain link fence, or a garment covering a tree, statue, or even an entire bus. Unlike graffiti, it's not permanent and it makes people smile. It might be up for only a few minutes, or it may last for years. Sometimes tags accompany the item - like the Swedish yarn bombing group called Masquerade whose motto is Nemo Attexet Sobrius! (Nobody Knits Sober!) And sometimes the pieces remain anonymous.

So bearing all this in mind, Buddy and I stumbled upon this one morning. Someone came with stealth in the night and yarn bombed the crap out of these two.

I prefer it this way, but clearly the art gallery owners did not, as the yarn was removed after only a few days. The piece is now back to its nudie-pants state. You can tell from the way Buddy is gazing longingly into the depths of their crocheted souls that he fancies the fuzzy. 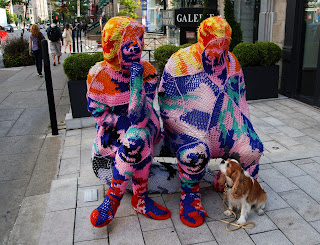 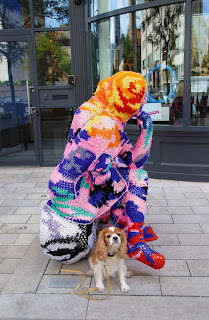 I wait patiently, and wonder where I can stake a claim as I nurture my inner yarnarchist.
Posted by A Novel Woman at 11:44 AM

Cannot imagine doing all that work and then wandering off and leaving it on a statue or a tree or a bus... That being said, I see you as plotting a yarn bombing this very moment. Probably going to knit an afghan.

I'm thinking a tiny granny square on a fence is all I can manage right now.

It's been so long since you posted that I have visions of granny squares on all the fences of Montreal...and your subsequent arrest and imprisonment...where you sit in solitary confinement knitting nonstop, thus negating any chance of parole.

I love this sort of thing! I've got to yarnbomb something someday...]
(added the word yarn to that other word cos I don't need Big Brother watching me...)