Do you believe in Synchronicity?


Well, my socks were blown off today.

Recently I wrote a piece on coincidences. It began like this:

Coincidence kills good fiction, as the saying goes. In fiction, we expect patterns of cause and effect. If everything happens by convenient accident, there is no buildup of suspense, no curiosity about what comes next. At best, there’s an eye roll. At worst, we exit the movie theatre or throw the book across the room. When everything is contrived, it destroys our willing suspension of disbelief.

So why, when it happens in real life, does it seem like a small miracle? Carl Jung called that synchronicity, Deepak Chopra calls it synchro-destiny. Whatever you call it, whether a “conspiracy of improbabilities” or fate poking its cold wet nose into our hands, real life coincidence is meaningful and fills us with awe. Twins who found each other as adults. Best friends whose parents dated...

I went on to describe events in my life that were too coincidental to ignore. I didn't know what if anything they meant, but the pundits say, ask yourself what is the message, the significance? If you do, the answer will present itself.

So here's the thing. Throughout the year, at odd times, I'll start to notice the clock saying 11:11 or 2:22. It happens often enough that I pay attention. Sometimes it's not even the real time, like the flashing clock radio in the kitchen I never bother to adjust because there's always another power failure to knock it back again. (Also, I don't know how.) So sometimes it will say 11:11 when it's really 8:02.

My sister Lisa and I have taken to texting each other when this happens. "Haha, look. It's 11:11 on 11/11!" Once the fire alarm went off at the cottage during the night, and we collided into each other in the hallway. The time? 11:11.  Then there will be nothing for months, but it will start up again, and we'll send more "BOO!" texts back and forth. It's a silly game we play.
What do you think it means, I asked her, because it happens with such frequency I'm starting to find it kind of creepy. I'll wake up in the night an press my alarm light to check on the time and more often than not it will read 3:33 or 4:44 or 5:55.

Maybe it's Nana saying hello, you know, from the other side, said my sister. Our beloved grandmother passed away in 1988, just after my son was born. Okay, I could deal with that. That wasn't creepy, that was comforting. (Numbers repeating for no reason is creepy. A dead relative saying hello beyond the grave is not creepy. That, my friends, is how my brain works.)

Last year, a cousin I had never met, indeed, never even knew about, contacted me through this blog and sent me a photo of my grandmother and her older sister Edith. I'd never seen it before, and was thrilled to have it. 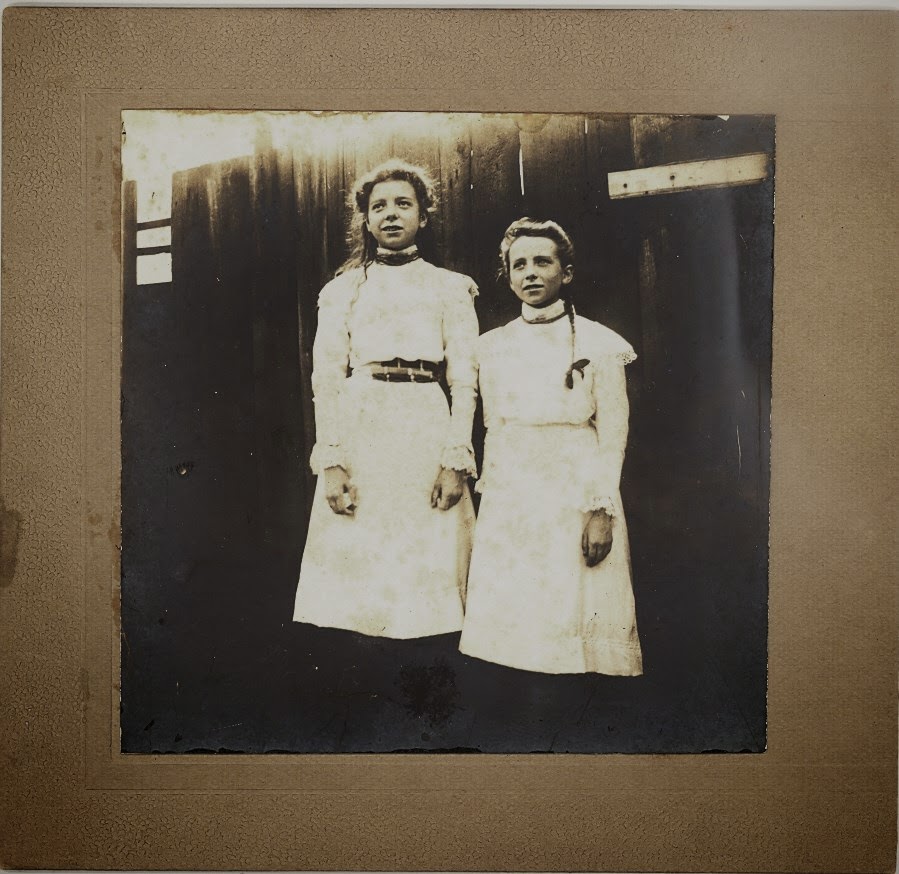 This year, her birthday was last Monday. I thought about Nana all day. She would have been 125. (If you think that's impossible you haven't heard of this lady.)

This afternoon, Buddy stood in front of my china cabinet and barked at it. Repeatedly. He'd woof, back up, stare intently, woof again, look at me, stare at the cabinet. To be fair, he's a bit of an oddball dog. He doesn't bark often, but he will woof at the couch if the blanket is in his way, or at his bed if it's in the wrong position. But there was nothing in, on, beside or under the cabinet that would account for his behaviour I looked for a mouse, a moth, food, anything. The only thing in there was my grandmother's china. And he wouldn't stop. I'd haul him away, and a few minutes later, he was back, staring at the cabinet and softly woofing at it again.

I ignored him and checked my emails. A casual glance at my junk mail file showed an unfamiliar name with a subject title, "A fun little mystery unfolding....maybe." Another Nigerian scam, I figured.

It said, "I don't know if you are the right Pamela Patchet, but I thought it might be fun to send you this note and see what comes of it."

The woman who wrote, W.W., lives in California and said her father was a former senior editor of covers and photos at Newsweek Magazine. He passed away, and she was going through his things when she came across a letter from an E.L. Patchet in Toronto. (Ernest Luther. My grandfather.) In the letter, he said how surprised he and my grandmother were to see a photo of their granddaughter (me) on the cover of Newsweek. In fact, it was the woman who wrote me the email who appeared on the cover back in 1960, and I guess the resemblance was such that my grandparents felt compelled to write and ask.

She said, if you would like your grandparent's letter, the photo, and the copy of the Newsweek cover, she would be happy to send it.

Then I looked at the date of the email.

I can't even begin to tell you how much this story means to me ...My life has been one massive synchronistic event! These days I just completely trust that everything on this planet happens for a reason from the 11:11 (I googled a month ago because it happens so much to me ) to finding my birth family on the internet (google) and if you want real synchronistic events meeting you is up there too!

And no, not creepy at all. But then I am the person who enjoys cemetaries too. Amazing places filled with stories.
:-)
BB