I'm out of chocolate 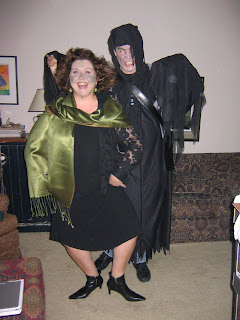 It's November in Montreal, which means gray, drizzly, cold and I can handle that, I really can, IF I have chocolate. My Swiss stash has run out, the dark chocolate biscuits are history and the kids found my hidden Chipits. There isn't any leftover Halloween candy. I'm not that into Halloween as a holiday, and I don't normally get dressed up, but since we were invited to a party this year, we both got into it. And it was on our street which meant we could walk there and stagger home.
This is me with Death. I started out as a Witch, but after poofing my hair and adding false eyelashes, I decided to go as Death's Mistress. Despite the fact that I'm middle-aged, married and my face was painted gray with green highlights, it didn't deter some of the (older, nearsighted) men from making passes, which certainly made Death take notice. 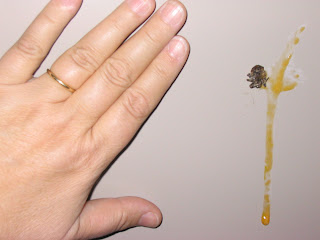 Anyone who knows me knows I love animals and while I don't hate spiders I don't exactly like them either. I'd say it's more of a wet-my-pants-when-I-see-'em type phobia, actually, but I generally let them be.

This puppy was on my front door. A teenage girl first alerted us to the fact that it was hanging there by screaming in the way that only teenage girls can. I reacted without thinking, and grabbed a shoe to thwack it, not realizing it was a she, and she was carrying eight billion babies, resulting in the yellow goo. If Halloween had not just passed, I'd have been tempted to leave it on the door. Okay, who am I kidding. The spider is gone, but the spider spackle is still on my door.

In a lovely, ethereal kind of way, of course....

Yah, "ethereal" is a word used to describe me all the time. Especially when I dance, or clean out the bathtub.

Hi Pam! You eat chipits that are meant to be saved for baking too? I'm glad I'm not the only one!

Deniz, Everyone knows there are no calories in Chipits when they're eaten straight from the bag. Something about the energy expended per unit vs the energy consumed in a solid mass...ah, forget the physics. Just trust me. Chipits = no calories.