Our local radio station, CJAD, is having a dog contest and Buddy needs your help.

That's right. Buddy is now entered in a dog popularity contest where people are asked to vote for Most Popular Dog. As you know, The Budster is awesome in every way. (Except for wigging out when left alone and assuaging his frayed nerves by shredding Kleenex. And swallowing thongs. And eating squirrels whole. And his breath smells like a corpse pulled out of a swamp. Other than that he's perfect.)

Now, as a rule, I don't enter a lot of contests (well, Pioneer Woman's are amazing) or support beauty pageants, for humans or canines. I would never, say, make The Budster wear a tiara and prance about onstage, unless of course he wanted to. There is a strong possibility he might because this is a dog who loves wearing dog clothes. When he sees his 100% wool, argyle patterned turtleneck sweater being pulled out of his pile of canine couture, he's got his head shoved into it before you can say Alpo. He likes dressing like a human, and if he could wriggle into clothes by himself, he'd be prancing around in Poochy Gucci every morning. (See here for a refresher.) This is a dog who puts the "king" in the King Charles Spaniel.

So, here we are in this contest, with the goal of creating a calendar to support our local animal shelter, so how can we say no to that? Now here's you all come in, and your part is easy peasy.

If you want to see the other dogs (and really, why would you, but in the interest of fair play, I'll give 'em to you) they're at cjad.com on Ric Peterson's page. There are three Youtube videos, and Buddy's is on the third one titled Ric Peterson Dog Show Part 3 at the 3:17 mark.) Go HERE.

Or, if you want to take the easy route, you can look at his photo below, know in your heart that there can't possibly be another, cuter dog than this guy, and just vote for him. 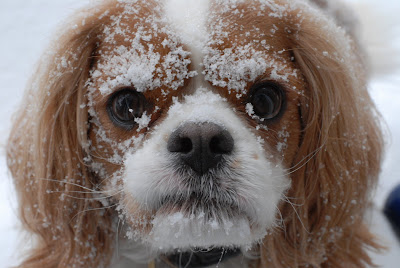 All you have to do is this.

Send an email to dogshow@cjad.com and put "Buddy P." in the subject line.

That's all you have to do to register a vote. It has to be in by Monday to count. You're only allowed to vote once, so tell your friends. Come on. Support the SPCA by voting for Buddy!

Oh, and if he wins, we can't tell him. If you think he's insufferable now....

Thanks for your support! I know I can count on you guys!
Posted by A Novel Woman at 3:12 PM

Awww...he's so cute all snow covered! You know who I voted for.

I did it! He's a sure winner. Look at that face!

Done! He'd better be among the finalists so we can vote for him again!

Thanks everyone and to all who emailed me privately!

Done! What a darling dog.
Lola

I voted. How could I not? He is toooo cute.

Thanks for the votes! We won't know until next week if he made it into the finals. He'll be crushed if he doesn't make it, at least until a cookie distracts him and he forgets all about it.