Time for An Echo in the Bone 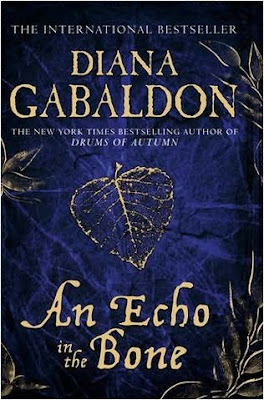 The incomparable Diana Gabaldon has finished book 7 in the OUTLANDER series! Mark the release date on your calendar - Tuesday, September 22nd - and then clear that calendar, because you will not get anything else done until you finish this book. (If you are one of the few who has never read or heard of OUTLANDER, drop what you're doing and go get it. Right now.)

Diana was kind enough to send me the proofs for book 7 a while back and oh, baby, baby, baby. Tighten your seatbelts. You're in for quite a ride!

"Jamie Fraser, erstwhile Jacobite and reluctant rebel, knows three things about the American rebellion: The Americans will win, unlikely as that seems in 1777; being on the winning side is no guarantee of survival; and he’d rather die than face his illegitimate son — a young lieutenant in the British army — across the barrel of a gun.

His time-traveling wife, Claire, knows that the Americans will win, but not what the ultimate price may be. That price won’t include Jamie’s life or happiness, though — not if she has anything to say about it.

And in the relative safety of the 20th century, their daughter Brianna and her husband, Roger, watch the unfolding of her parents story in the past — a past that may be sneaking up behind their own family."

Watch for it on the NY Times list. Look up, waaaay up. (Name the source of that quote, all you Canucks!)

We'll soon be getting together once again for workshops, drinks and general jollification at the best writers' conference on the planet, the Surrey International Writers' Conference. For up-and-comers or established pros, whether you'll be pitching, learning or networking, this is the best international writers' conference you'll ever attend. It's fun, inspiring, deep, silly, informative, and I wouldn't miss it for anything.

Edited to add: Just to make it clear, The Divine Diana Herself will be at the Surrey Conference, and will be signing her book(s) there! Come one, come all!
Posted by A Novel Woman at 6:00 AM

Labels: An Echo in the Bone, Diana Gabaldon, SIWC

Isn't that a GORGEOUS cover? Wow.

You didn't mention that Herself will be in Surrey at that marvellous writers conference to which you referred.

And you also didn't mention that she mentions YOU in her acknowledgments!! Congratulations!

Oh, well, the acks weren't with the galleys so I didn't see them!