I joined a local camera club last year with the express purpose of getting better at taking pictures. The best way to get critiques is to enter competitions and get feedback from the judges on what works and what doesn't, and more importantly, why. While some of it is useful, most of it is quite subjective and comments are dependent on what the individual likes or doesn't like (one may have an aversion to flowers and another only likes birds) or whether or not he's had a fight with his wife before he left the house that night. "Watch your corners" and the rule of thirds seem to be another couple of golden rules, but sometimes those too are challenged.

A few weeks ago we had a general, anything goes pictorial competition. This means no category, no rules in terms of what you could do to change the photos, and no theme per se. Here are my entries. The judges particularly liked the first one, saying it reminded them of a art nouveau magazine cover. It was taken on a foggy morning near here, and that's exactly what it looked like when I shot across the lake. They liked the spot of sun on the water and the shape of the tress on the left. One judge did not like that teensy little vertical branch wayp up on the upper right side, but short of finding a ladder, climbing the tree and trimming it (which the municipal workers might not appreciate and by that time, the fog would have dissipated) I had to leave it as is. 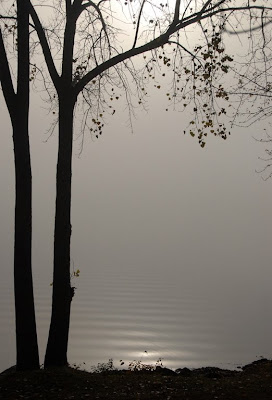 The second one was a milkweed pod, but they were kind of iffy on that one. I loved it, but maybe because it was a beautiful sunny fall day, and I kind of stumbled upon this little puff of a plant at the end of our cottage driveway. Usually a photo means something to the photographer and it evokes a mood or a memory of where they were and how they felt when they took it. Sometimes that can be communicated in a photo, and sometimes it's just another milkweed pod, my friends. 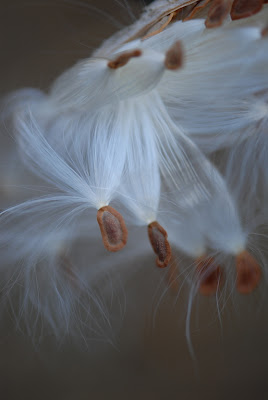 Then the third was a rock wall. This created a bit of a debate. One of the judges suggested it would look better if it was rotated. Oddly enough, that was the way I'd taken the original but I liked it better turned on its end as I feel it's more interesting that way and creates a bit of tension.

So I'm asking you. Which do you like better? The first one or the second one? You don't have to tell me why. You just have to agree with me. 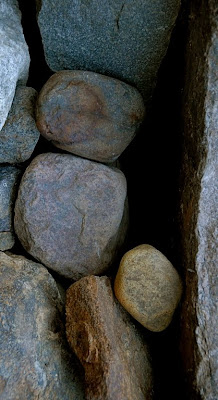 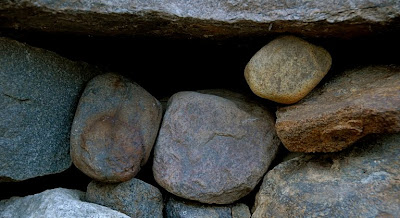 okay, the picture by the water, the trees? I like that for some reason it reminds me of a young girl, legs akimbo, arms outstretched. It just seems like such a graceful picture, a budding (no pun intended) ballerina, perhaps. The milkpod is interesting. The rocks now. I have to say that the first thing that I thought when I saw the first picture was: those rocks look like I feel... I rather like the 'standing on it's end' version.

Final note: The judge did not like the vertical branch?!!!!! Jees. Tell him to take it up with God.
You captured what was in front of you.

"Take it up with God" is going to be my new rallying cry. HAHAHA!

The tree was intriguing enough for me, I had to look twice for the 'branch' so tell that judge to stuff it.

I LOVE the milkweed pod! We had them by the thousands here when I was growing up. I never see them anymore. So for me, it brought back some wonderful memories.

With the rocks...I do and don't agree with you. I like them both. They both say something different to me. The vertical one, that they're striving to remain upright in the face of gravity's adversity. Rather like me some days. But the gravity is replaced by life.

The horizontal picture just looks peaceful. Like someone hundreds of years ago built something with their own hands that has withstood time and remains solid, implacable, like it will always be there.

And...that's all I have to say about that! Didn't realize I was going to get weird until I started typing lol

OMGosh! Yes, Debby, "Take it up with God" is brilliant. LOVE it. Seriously, how can you complain about that tiny branch? I had to search for it.

I clicked on both rock pictures, which blows them up. Gotta say that in the horizontal one, my eye is immediately drawn to the blackness at the top of the photo, whereas in the vertical pic, I didn't notice it as much. My attention was more focused on one of the rocks. I like the blackness, as it provides a marvelous contrast, both in terms of light and texture to the rocks.

All gorgeous - I think the vertical twig makes that corner of the first photo kind of 'finished' and brings your eye back into the action.

I adore the second one - its ethereal and lovely and sweet.

The rocks... I agree with other commenters - each one evokes a different feeling. The vertical is more 'active' somehow. But the horizontal one would look nice on a canvas above a fireplace...

Thanks, BB. Actually the horizontal reflects what I saw, and presumably I liked it enough to snap the photo, therefore....ah, I hate logic.