New hobby? Or exercise in frustration?

I learned how to knit when I was eight. My grandmother taught me. This was a woman who could knit so fast her needles were a blur, and she could watch TV or carry on a conversation without even looking down at whatever project she was working on. She churned out mitts and hats and sweaters like no one's biznit. Remember those funny little hats with pointy ears that we tied under our chins? They were a 50s staple.

Sure, we were warm but the price to pay was being beaten to a pulp on the way to school by kids who didn't have nice grandmothers who knit.

My mother also knit beautifully, and I was always a crafty kid (in more ways than one) so it seemed a natural progression that I too would knit. After all, it was in my DNA. I made a few projects - a crooked, gnarly scarf that looked more like a pennant owing to my tendency to drop a stitch per row, a potholder if the pot in question was the size of a shot glass, but I gave it up in favour of other cooler crafts like macrame, and dating boys. Years later I took up quilting and other hobbies but never went back to knitting.

Now Youngest, away at university last fall and inexplicably with excess time on her hands, somehow taught herself to knit using YouTube. She made the most awesome gifts this past Christmas. For her brother, she found a "chubby baby alpaca" (the wool, not the alpaca, although it may have been obese for all I know) to make a scarf so heavy and soft it was like holding a newborn. Everyone who picked it up ended up fondling it. Check out the gorgeous wool hat she made for me (it's actually more of a burgundy colour than shows up here.) 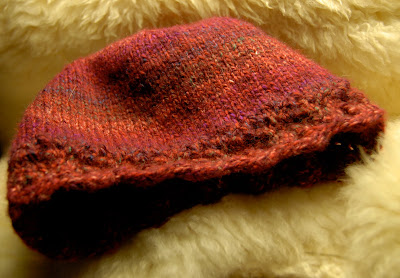 It fits me perfectly and is soft and warm and heavy and fits perfectly on my giant head (I'd like to think it's because of my giant brain, but we seem to be blessed with giant heads in our family and having met some of my relatives, I can say with some confidence it is not always our giant brains which accounts for our giant heads....)

So now Youngest has taught me how to knit again and this is the wool I'm going to try to wrestle into a simple scarf. It's hand-dyed "Slubby Blue" from Leicester sheep. Oh yeah, only the best for this wool wrangler. 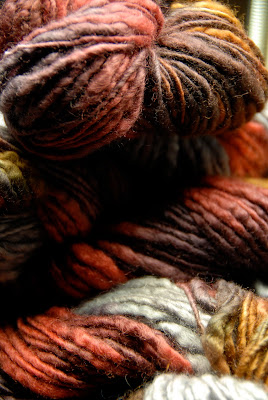 Good idea in theory. In practice, not so much. Last night, as we stood waiting for the train to take Youngest back to school, she showed me how to "cast on" which was accomplished, then we did the old "knit two purl two" in order to get rows of ribbing. Okaaaaay. After hunching myself into a dither and stiffening my shoulders to the point I couldn't move my left arm, all the while with Youngest directing me to go left no no, right, no around no no back yesss there you've got it (she is a great teacher and has more patience and understanding than I could ever hope for) I got about three rows in and declared myself taught. Ta da. I'd just go home and keep doing exactly what she taught me. How hard could it be? (Whenever I say those words, and I say them often, I always regret it....)

I tried to keep it going this morning. I somehow picked up an extra stitch. Then I lost TWO stitches in the next row. Having no idea how to correct it, I just undid the whole thing and started over. Except I forgot how to cast on. Over to YouTube, which showed me an entirely different way of doing it. No matter. The trick was to just DO it.

I ended up doing and undoing the first few rows THREE times.

Now I'm looking for a book on crochet.

Wish me luck. I think when I said knitting was in my DNA, what that really meant was Do Not Attempt.

I wonder if Youngest could instruct me on Skype?
Posted by A Novel Woman at 9:52 AM

PLEASE PLEASE don't give up (unless, of course, it makes you miserable, which is not the point at all.)

How about making up that gorgeous yarn with just knitting? I made bunches of scarves by knitting every single row. No purling at all. Just kept it simple and the resulting texture is fun, plus there is no right or wrong side.

You are so very clever and crafty (in a good way, of course). YOU CAN DO THIS!!!

Okay, the Do Not Attempt comment made me laugh out loud. My boys are wondering what's wrong with me. As far as your knitting goes, I say, "Do what makes you happy!"

Regarding your Youngest--that hat is beautiful! One of my close college friends used to knit gorgeous things throughout college. After graduation she ended up starting her own business and sold to all the chi-chi stores in NYC, (Bendel's, Saks, etc.). Over the years she's moved on to other knitwear related businesses. All this is to say that Youngest could have a burgeoning business on her hands some day (if she so chooses). Fabulous knitting never goes out of style!

Lottery Girl - I agree. Just knit every row Pam. Leah knits really nice scarves that way - she made me a gorgeous one for Christmas. Much, much easier. Don't get fancy until you knit a few simple things first. And, I remember wearing those hats with the little pointy nubs on top. Nana made those??

By the way - VERY nice hat!

Between my grandmothers, I learned how to do almost anything handcrafted that you can think of, including tatting (which I NEVER do anymore) and I agree. Don't knit and purl, just knit! Makes wonderful designs depending on the yarn you use (and I'm drooling over the yarn in your picture) it's easy, simple, and you can keep track of your stitches that way. When you've made a few things, then expand. But please, don't give up!

As a side; I too had hats like that. No one else did though. Need I say more about what happened when I wore them too? lol

Hey Novel Woman! I think crocheting is much easier...this video is a great help:

Ah, you guys are so nice and supportive when really, all I want to do is hurl my knitting needles out the window!

I'm now attempting to knit a row, then purl a row. The Knitting From Satan is now curling onto itself like a giant straw which makes me think this is not a good idea. Maybe straight knitting is the key.

This little bit of wool will NOT GET THE BETTER OF ME!

for years i refused to knit. picking up stitches dropped was too much of a pain for me to want to continue inflicting myself with. so i crocheted instead. it's so much easier cuz if you drop a stitch it's no big deal since there's only one to begin with anyway.

now i knit. i've made scarves, tuques, mittens, a sweater for myself (it's cozy warm) and socks. i'm not the greatest knitter in the world, but now i enjoy it.

Hi Pam,
I love the photo of the wool balls...er...balls of wool, I mean.
I remember the time I made a very complicated sweater with cables down the front, it was gorgeous. Only problem was, I made two backs, could not make the neck properly...arg...so I have since then, stuck with scarves, afghans and anything that is rectangular in shape.
I think I will go out and buy some wool today.

Please don't give up! With that gorgeous wool, it's bound to turn out right in the end :-) You can come to one of the Montreal knit nights, either on St Denis or Monkland!

I'd certainly love to learn to knit. Perhaps your daughter could come to visit...