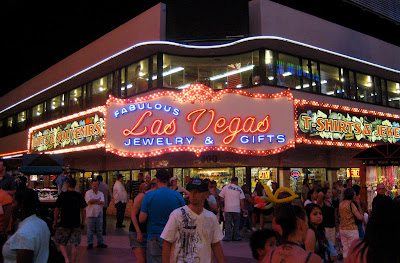 You want more Vegas? I'll give you more Vegas although the memory is quickly fading as I have spent the past week at the lake surrounded by chipmunks and baby hares and red squirrels and cheeky bluejays pestering me for peanuts. Oh, and one aggressive male hummingbird which mistook my red flowered kimono for his breakfast this morning. He got within inches of my nose, twittered his disapproval, and zoomed into the woods.

Simply put, Vegas, or at least the part I was in, is one bat-crazy party town. My friend, writer Vicki Pettersson (writer extraordinaire with a work ethic that should be bottled and sold) was born and raised there. She looked pained and said please don't judge all of Vegas based on the strip. This was reiterated by the nice young blonde pony-tailed woman beside me on the flight back to Montreal. She was wholesome, looked like a vegan hiker and worked as a fundraiser for cancer research and she too was born and raised in Vegas. She said she loved Vegas, but it's so much more than the strip. Her ideal day is to drive out just beyond the city to the stillness of the desert because that's where she really felt like her true self.

I did not find stillness in Vegas because I spent my entire time on the strip. I was swept up by the crowds, the barrage of music from every corner, the men and women flicking cards advertising women for sale, a bikini contest in our pool, Elvis impersonators, neon billboards a la Bladerunner, young women out on benders to celebrate grad who were indistinguishable from the working women, tinkling slot machines and spinning roulette wheels, little hoses misting pedestrians, and always the inescapable heat of the desert in summer. The heat was shocking, hitting me like a wall as soon as I exited any building (which was usually overly air-conditioned to my delight) and shimmering up from the pavement. Even the wind felt like a blow-dryer. I drank bottles and bottles of water and it was never enough. People everywhere casually walked around with drinks in hand, or pitchers of beer in both hands. 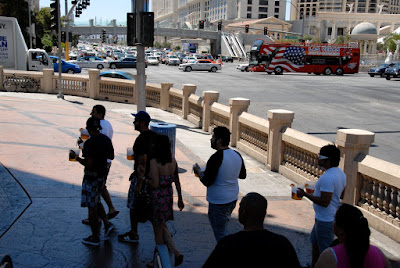 Apparently our weather was not all that hot according to locals, just "moderate" because it wasn't in the triple digits.

So I'd say it's a bit like a frat party/Star Wars Bar/circus all rolled into one. A walk down the street means running across people in costume for no apparent reason. One afternoon I spied two Kiss guys, several Elvises (Elvi? Elvee?), Michael Jackson both live and one encased in a rubber mascot type costume (how he survived the heat I don't know), three Star Wars guys, several showgirls including one all in black feathers and an enormous set of black feathered wings, and a middle-aged Dorothy of Oz resplendent in blue gingham dress, braids and ruby slippers, sprawled on an upturned bucket having a smoke and talking on her cell phone.

I won't even tell you about the (very legal) working girls I watched plying their trade in the hotel. Except for one notable one at 6 a.m. Friday morning. My sister and I were off to find the pool and we got stuck behind a very tall hooker as she teetered along on her very high heels, clutching at her very inebriated client. Both of them bounced off of, and slid along, the hotel hallway walls, thus preventing us from passing. We lumbered along in their wake, two middle-aged women in our bathing suit coverups, mesmerized by her very round and bouncy buttocks stuffed in a silver dress which stopped right below her bum. Once they got to his room, they were invited in by a third party who shouted....no, I can't repeat it. But it made my sister and I double over and forget all about the pool, which wasn't open anyway.

But back to the weather (because I'm Canadian, and we obsess over weather first and foremost.) One good thing I'll say about the heat. It was surprisingly easy on the hair. Instead of frizzing all over the place, it stayed put. All day. As in, just out of the salon straight. For one who struggles daily with fine hair that goes haywire in the humidity, it was a joy. However my skin felt like that guy who "chose poorly" in the second Indiana Jones film.

I suppose I should also mention the crazed man high on something who careened through the hotel casino on Saturday morning. My sisters and I were walking around in a daze in our (my) quest for Starbucks coffee (seriously, the casinos are set up like mazes on purpose with no windows, soft lighting and no clocks so you'll end up spending as much time as possible in there. You find yourself looking for some sort of landmark to get your bearings. "Was the Starbucks to the left or right of that pole dancer?") Suddenly this guy - bare-chested with his shirt wound around his head - smashed into this young woman beside me. She made a comment under her breath about his rudeness, and when he got to about 20 feet away he turned slowly, looked right at me and my sisters, and charged full on like a bull in a bullfight. He screamed (at no one in particular) "GET OUT OF MY CASINO, MOTHERF***ERS!" We all froze in shock. Then he shoved one of my sisters into the other and ran off, grabbing a bar stool along the way which he threatened to throw. He bolted out the door before anyone else could react.

It was kind of thrilling. My neighbourhood at home is so quiet in comparison.

I have to say I loved the carnival atmosphere of Vegas and the people watching, especially at Fremont Street. I gambled a bit, mostly 25 cent slot machines and Black Jack. I won more money than I lost, which I think vexes my husband who cautioned me not to get sucked in.

We saw the Cirque du Soleil show LOVE featuring Beatles music. Loved it, though we were in the very last row of the theatre and so high up we could almost touch the lighting fixtures. Seriously, just when we thought we couldn't climb any higher, the usher would point to yet another set of stairs until we were at this narrow set of steps out of a Dicken's novel. As we practically curled our heads into the crease of the roofline, a woman sat in the seat directly ahead of us and complained to her husband, "gee, could we BE any farther away?" I leaned forward and said, "Uh, yes you could actually. You could be in my seat."

Which made us all laugh. Then we dabbed at our nose bleeds and enjoyed the show.

We saw Blue Man Group on Saturday night (silly fun) and Cher on Sunday. What can I say. The crowd, with its strong gay representation, got into the swing of things in a big way. There was swaying, fist pumping, and dabbing at tears when the old clips from the Sonny and Cher show were shown. It was great. And the woman looks amazing. Ah-maz-ing.

So now I'm home again, with the other kind of wild life. 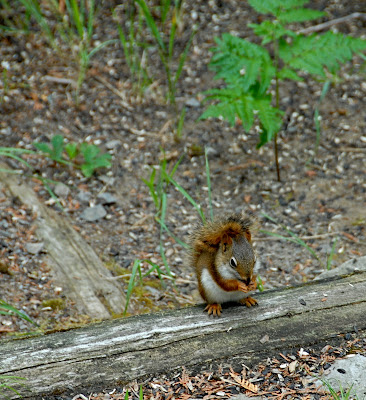 As I read through your post, I felt myself doing double takes as I am sure you did with all the exhilarating scenes that presented themselves to you. That was a great account of your Vegas vacation.

I love it when you write accounts like this... I know you want to escape to your G&Ts (we'll miss you) but I do think you have a gift that you don't use (here at least) often enough. (Perhaps you could teach me some grammar also?).

You just confirmed all the reasons I adored Vegas (and why I loved leaving there). Who could stand the visual assualt much longer?
:-)
BB

Did you know that you can shorten your long urls with AdFly and get cash from every click on your shortened links.

I've just downloaded iStripper, and now I can watch the hottest virtual strippers on my desktop.