She may or may not have been the recipient of this letter. According to Snopes, it's been circulating since at least May 2000. However her views on homosexuality do not jibe with mine.

She became an Orthodox Jew, then gave it up. She dispenses advice on parenting, but despised her own parents (and her mother died alone in her apartment, her body found two months later in her condo) and dispenses advice heavily leaning towards conservative "family values" even though she had an affair with a married man, lived with him for close to ten years, and eventually married him then announced her pregnancy at their wedding. I don't know why she got her own radio show.

In her radio show, Dr Laura Schlesinger said that, as an observant
Orthodox Jew, homosexuality is an abomination according to Leviticus
18:22, and cannot be condoned under any circumstance. The following
response is an open letter to Dr. Laura, penned by a US resident,
which was posted on the Internet. It's funny, as well as informative, but it may only be legend:


And because I don't like to end on a sour note, here is a cute chipmunk who was following me around the yard. 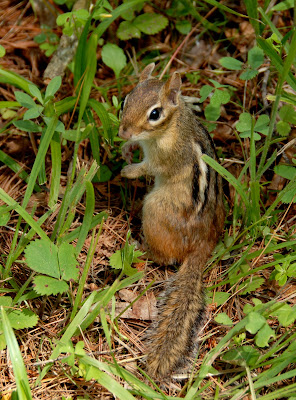 Couldn't agree more - I can't stand her! GREAT letter!!! Let's hope it was real and that she actually read it. :-)

I am trying to catch up on all your blog posts that I have missed of late--summer is just too crazy!

Just a general comment: Your posts always make me smile, or laugh at loud, or feel better because of the beautiful photos you take of nature, or of your lovely family. Thanks!

I find that the more judgemental a person is, the more negative and critical they are of others, the more skeletons in their closet.

Dr. Laura has got to be one unhappy person. The sort of person you're glad you don't live with or work for.

That squirrel is totally doing that "Duh Duh Duhhhhhh" (dramatic music) look at you!

Hi Pam,
Is "Dr. Laura" really a doctor or is she on par with that knob, "Dr." Phil?
Can any one tag on the word "Dr." and grant themselves a Medical degree?

She is one miserable person to be projecting her garbage onto those around her.
Hope she did get that letter or has at least had it forwarded to her, somewhere in her soul she knows that it's not right.