Cat As A Hat 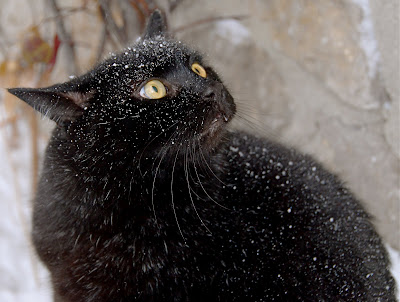 For all you cat owners out there, it won't come as a surprise to know we are the ones who are owned by our cats not the other way around. And they are nothing if not creatures of routine. They want what they want when they want it.

Boris is a prime example. He has his favourite napping spots - behind my head on my reading chair, or beside me on the leather couch if I'm watching TV, or under the lawn chair on the back porch.

When he is hungry, he always waits until Kicia eats first. He could easily squash her like a bug, since she weighs a third of what he weighs. And yet he sits patiently for her to finish and move aside. If he happens to be there first and she jumps up behind him, he'll move. He knows if he doesn't, she'll bite him in the arse, but he won't retaliate.

He has a bad rap in the neighbourhood because he's a big black tomcat with a tough name (not his fault) who is more stupidly stubborn than aggressive and he'll hold his ground and protect his turf from any interlopers. He has a doppelganger who lives nearby, and that is the real culprit behind all the cat fights.

That's my story and I'm sticking to it.

Boris comes in every night when I whistle for him, and he runs upstairs right under my feet when I go up to bed. He follows me in the bathroom and flops on the bathmat at my feet. Despite his advancing years, as evidenced by his increasing gray fur and one white-tipped ear, he is still playful and will jump on my foot if I wiggle it under the thin cotton. He never uses his claws, but you can feel the strength in those giant padded paws, powerful enough to take down gray squirrels when he wants fresh meat. He likes to drink out of the dripping faucet. Doesn't matter how fresh the water in the bowl happens to be, he won't touch it. So he'll hop up and sit on the counter and wait for me to finish brushing my teeth before he dips his head under the faucet and takes delicate sips.

However he will occasionally drink out of the toilet bowl and has fallen in a few times, so we keep the lid closed. It also helps him climb up to the counter because his legs fail him sometimes and he misses and falls to the floor.

I had to laugh when my sister sent me this video.