Joanna Bourne and THE BLACK HAWK 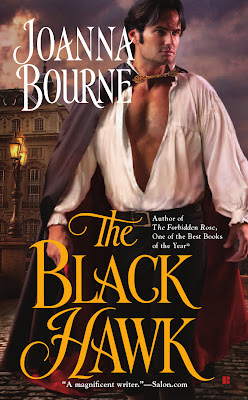 If you like romance and mystery and historical fiction, check out Rita Winner Joanna Bourne's latest book THE BLACK HAWK, which has just been nominated for Best Historical Romance by Romantic Times. Some of her earlier books include THE SPYMASTER'S LADY, MY LORD AND SPYMASTER, and THE FORBIDDEN ROSE and if you haven't read them, stop what you're doing (seriously, stop it, right now) and go get them.

(Jo is an awesome storyteller, and I'm telling you, hand over heart, that Spymaster's Lady made me stop and gasp and slap my thigh and yell a hey nonny nonny WHATNOW?! when I got to a certain part in the story. You will too. Trust.)

Publishers Weekly said this about THE BLACK HAWK:

Bourne mixes heart-pounding mystery and romance in her spellbinding fourth Spymaster historical romantic thriller (after 2010’s The Forbidden Rose). From childhood, Adrian Hawker spied on France for England while Justine DeCabrillac gathered intelligence for the Police Sècrete. They were teens when they met in Paris in 1794, and as they grew up, their paths crossed often in a changing world. Sometimes they were on the same side, and sometimes they were opposed, but it was inevitable that they fall bittersweetly in love, knowing that any minute duty could take precedence over passion. Their tempestuous love affair unfolds in flashbacks, alternating with scenes from 1818 London, where somebody tries to kill Justine and frame Hawker, now head of the British Intelligence Service with as many enemies in England as in France. Just the right amount of intrigue makes this vivid romance a gripping page-turner.

Last year, I had lunch with Jo and Anne Perry and the luminous, unflappable, awesome writer and conference coordinator Kathy Chung at the Surrey International Writers' Conference. Listening to Jo and Anne in conversation was like watching two master tennis players lob a ball back and forth for fun. They both have brilliant intellects and wit, and as they discussed details of the French Revolution as casually as one might discuss the weather, I felt privileged to be their ball boy grabbing at stray balls. Jo knows her history, and she is a born storyteller, so the two combined? Magic.

Hie yourself over to The Debutante Ball where you'll find an interview with Jo and a chance to win her latest novel.
Posted by A Novel Woman at 6:34 AM

I'm jealous! (about you, sitting with Anne and Jo).

Jo is a talented lady. I'm using your post to springboard one on my blog for Jo, too. Everyone deserves to enjoy her books. Kind of like they deserve to read your stories--nationally (hint, hint).

Aw, man. Now I'm jealous. I would've loved to have been a listener to that conversation.

What a fabulous lunch that must have been!

I'm green with envy myself. Drove right through Virginia on our last road trip and I pointed off into the hills and said in a hushed voice "Jo lives there, somewhere."
DH said, "no stopping, we're on a schedule!"

Jo has a dry sense of humour and a really quick wit. I love her!