I may as well warn you, if you're the least bit squeamish, or you're an animal lover at all costs, or if you're squeamish (did I mention squeamish?) then walk away from the blog.

Don't say I didn't warn you.

Here is my secret weapon known simply as The Boris. 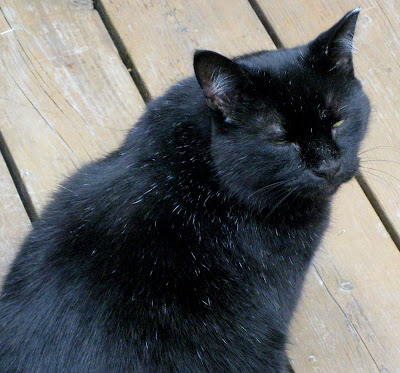 I've had Boris for umpteen years. He's got a reputation around the neighborhood for being a bad seed, but that's prejudice pure and simple. He's not aggressive, just stupidly stubborn and will stand his ground no matter the consequences. This has left him with a bad rep as a fighter. I have no idea how old he is because he was a stray when decided we'd do as his new caretakers. He has a lot of gray now, and his teeth are not in great shape, but one thing that's been pretty consistent is his weight gain every fall. I thought it was because of all the mice he catches, judging from the mouse bits and pieces on the front steps every morning. And his saucy little swagger.

(I have photos I'd love to share with you what it is I have to face when I step out my door, but gentle readers fear not, I will not abuse your tender hearts.) 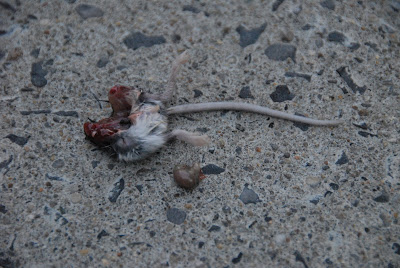 (Hey, if I have to stumble out in the mornings, usually without benefits of coffee, and THIS is the first thing I see on my front step, why shouldn't you suffer with me?)

(And you may as well know now, it's going to get worse.)

Just last weekend, he bagged six. He's a tad fussy, so he only eats the chest. He leaves the bottom half, the top two severed feet, the front of the head, and one organ I have not yet identified. It explains why each autumn, his belly swings from side to side as he staggers up the driveway, meat drunk from daily feasts of squirrel. The vet tried to put him on a diet once and of course, it failed miserably because Boris just helps himself to the all-u-can-eat scampering buffet on our lawn. And yes, before you say it, we tried keeping him inside, but he hides then bolts out the front door faster than Jennifer Aniston's boyfriends.

I took a photograph of one of the carcasses he left me, and by "shot" I mean photograph. (What am I, Alaskan?) They're all left in the identical state I described above, like some serial killer on CSI. I will spare you that photo, I promise, because it's horrible, but you should know that every time I walk across the lawn, I assume I'm going to find another body. 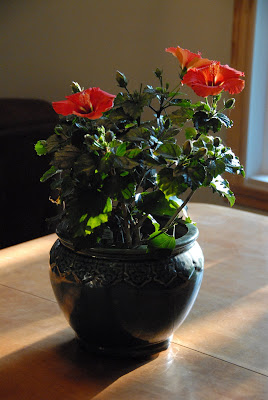 By now you're probably wondering, "But wait a minute. Didn't she mention a skunk in her tally?"

It was only a matter of time, I suppose. I'm surprised this hasn't happened sooner, actually. We've had a family of skunks living under our front porch for months now. My kids are a little freaked out when they come home from a night out with friends and have to outwit, outsmart and outplay a bunch of skunks before they can get in the front door. I put moth balls and spicy Critter Ridder under the steps and blocked the access with rocks. I thought, naively, that would be it and they'd move on. And they did. Into the back yard.

Last Saturday, I let Buddy out at midnight for last call. Buddy is a Cavalier King Charles Spaniel and despite his dewy-eyed appearance, these dogs are hunters. Flushers, to be more exact - it's in their genetic code to run ahead of the hunters and flush the game. They live to chase. You see where this is going, right?

As I watched at the back door, Buddy bolted into a corner of the garden as though fired from a cannon and I knew, I just knew what had piqued his interest - something with four stiff legs and a tail in the air. Within seconds, Buddy stumbled back to the door and I saw he had taken a direct hit to the face. Buddy couldn't open his eyes, he was salivating and looked completely shell-shocked. I kept my cool and calmly planned how best to treat him....okay, I freaked out, completely and utterly, and sobbed as I grabbed latex gloves and water, not thinking that the clothes I had on at the time would be ruined. I was just terrified he'd been permanently blinded.

Doug got on the phone with our vet who said to use a mixture of peroxide, baking soda and dish detergent on his body, and rinse his eyes with plain water. Needless to say, we didn't have any peroxide in the house. (I was telling this story to a nurse friend of mine who said, "Oh yes, peroxide. I thought everyone keeps that around for wounds. You know how it bubbles up nicely and releases oxygen when you pour it on an open wound?  I was just removing some maggots from a patient the other day and...." Seriously. Like she was chatting about adding milk chocolate chips instead of semi-sweet to her cookie recipe. Actually, milk chocolate chips do make me shudder more than maggots, but I digress.)

So Doug went off in search of an all-night druggist at 1 a.m. while I rinsed Buddy's eyes, then I sat with him on the back deck so that he wouldn't a) go after anything else and b) jump up and paw at the door. Up close and personal like that, it was an indescribable assault that didn't even resemble the gentle whiffs one gets when driving past a skunk on the road. It was an entirely new evil - heavy, dark and acidic, and it crawled into my nose and throat, coated my tongue and clawed its way into my brain.  I sat there alternatively retching and talking calmly to Bud who was so pitiful, it made me cry every time I looked over at him.  I tried to cover him with a towel because if I was chilled to the bone then he was too but he wanted to crawl into my lap, Cavies being lap dogs by nature, but that clearly wasn't an option. We sat, shivering, for over an hour until Doug returned with the ingredients for the Magic Potion.

There were a couple of hours of outdoor scrubbing with the peroxide mixture. I was numb with cold and my back went into spasms. The house reeked in every corner of every room from just opening the door.  Around 3:30 a.m. we carried Bud upstairs to the tub and shampooed him. It's a credit to his personality that he withstood all of this without complaint, even letting me wipe his nostrils and muzzle without moving. We gave him a bit of yogurt because there was nothing else to do for his tongue and mouth, and I dried him with a blow dryer. Then we all stumbled into bed around 4:00 a.m.  Clothes, towels, blankets, all ruined.

I wish I could say it cured Buddy of running after things, but the next morning, he charged into the same corner to check out a rustling noise, which thankfully turned out to be a cat.

I could only shake my head. But really, look at that face. Could you stay angry? 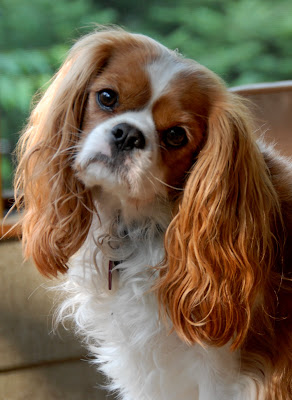 Now if Boris was the one who got skunked, it would be game over for everyone involved. The only way I could bathe him was if he was in a coma. And even then.... 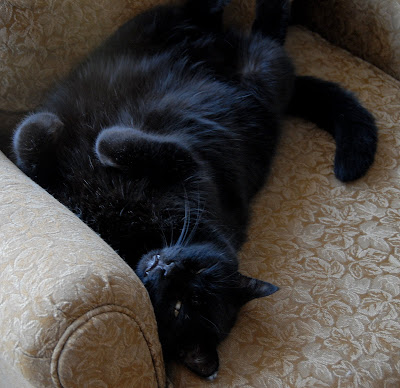 Pam, I could die happily now, having just read a longed-for Squirrel Story, with the added bonus of a Skunk Sub-plot. Thank you, thank you. I would not have flinched if you had posted pictures of the squirrel pieces, thus is my desire for all things squirrel, Boris, and Buddy-related!
Jo

I aim to please.

As for more photos, be careful what you wish for.

You poor dear. How absolutely ghastly.

I swear, nature in the raw tempts one to pave and install astroturf.

Have you considered acquiring a Zuni fetish skunk to protect the house and livestock?

Oh. The one I was looking at is at

Oh,Pam! I'm sorry, I feel so bad for Buddy and you and the DH, but I gotta tell you, I was laughing hysterically through huge chunks of that story!

Been there with the skunk. I can't stand even the whiff anymore and I want to hurl...

And poor Buddy. I've been there with dogs and skunks. We had, as my daughter termed him "the best dog ever in the world," Higgins, a blue-merle Sheltie who adored baby animals and would bring them to us to show us. And yes, baby skunks. Sadly, he ran into mama Skunk. At that time the solution to skunk-stink was tomato juice. My neighbor brought us jars of her best canned tomatoes to do the deed. Poor Higgy. He remained a pink, blue-merle for weeks. Couldn't get the stuff out of his fur no-how.

Joanna, if I thought the fetish would work, I'd be wearing one around my neck 24/7. I saw another skunk scampering down main street last night on my way home from my photographer's club meeting (where, despite my preparation ie I washed my hair with dog shampoo formulated for skunk odor removal, I still smelled awful.)

Nightsmusic, you are evil.

bnavta, I have a friend who looked after another friend's Dalmation while they were away. It got sprayed and she treated it with tomato juice, then handed over a pink Dalmation when they returned.

pearlsandchocolate, Boris is an awesome cat, and he knows it.

Oh, Pam, your blog is always such a joy.

As for the tomato juice stain, we always blued our Aussies when we got ready to show them. It does whiten the fur tremendously.

You can sit next to me at Surrey. I am so stopped up I can't smell anything.

OMG! Great post! I mean GREAT post. I have a skunk story to share but I'll come back later..I have 7 teenage boys I have to go corral...and I let my kid have a party WHY?....
and ...
I vote to see the carcasses...I"m just sort of sick that way.
The cat leaves them as presents to you as the mom.
yah..thats love!