Wildlife Photographer of the Year

Whenever I can (afford it) I go to London (England, not Ontario) at the end of February (still deep winter in Canada) and walk the (snowfree) streets of London, immerse myself in culture (art, plays and warm Guinness on tap) and pretend I live there for ten days or so. God, I love that city. I feel dark, irrational lust for that city. A reminder of what I'm leaving behind at that time of year and what I'm running to embrace: 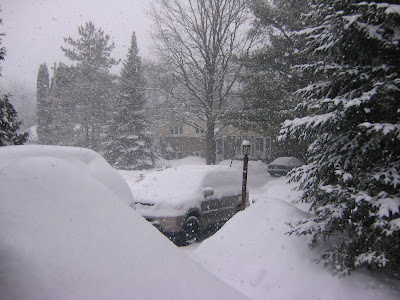 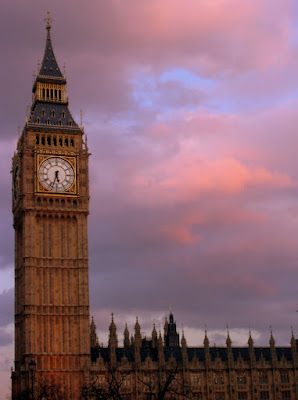 Well, I can't actually embrace it as you can see, it's quite tall and trust me on this one, security takes a dim view of a crazy Canuck hugging a building, but I give it a mental hug. (Take that as you will.)

I will take London over Any Other Vacation Spot on earth (except maybe for Paris, which also rocks as it was where we spent our honeymoon and our 10th anniversary, BOO-yah) (oh, and New York City, which kind of has the London vibe only the people are much ruder unless you throw Parisians in the mix and then they win that one hands down, especially if you're an American sitting in a bistro and you try to order, say, freedom fries and instead of saying "pommes frites" you say "pommes" and the waiter tries to bring you apples, even though he knows EXACTLY what you want. I watched this transpire at the next table and felt compelled, as a Canadian with limited French and a deep-seated love of fries, to step in and save the fries, I mean, day.) So back to London. This is London in February, a shot taken on a walk in St. James Park: 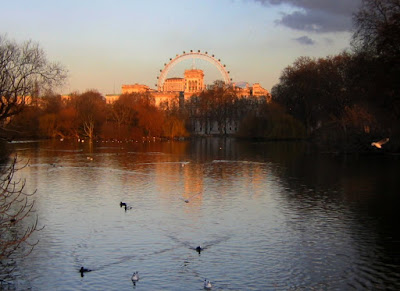 Notice how the birds are flying, not hatching an egg on their happy feet?

So one year, I wandered in to the Natural History Museum, for it was beckoning me across the street from the flat I was renting, next door to the flat where the last woman to be hanged in London lived. Well, before they hanged her. (Yes, they have plaques for everything in London. "Charles Dickens stopped to blow his nose here. Once.") After breakfast at Patisserie Valerie (NOT TO BE MISSED) I checked out the Wildlife Photographer of the Year exhibit at the NHM and it's been a must see every year. Unfortunately the actual trip to London isn't a 'must do' every year (well, it's a 'must do' in my books, but in my husband's books, the ones with all the little red numbers in them, where it's a 'can not' for the present time.)

The nice thing is, I can still check out the exhibit online. The winners were just announced and you can see them HERE

It's not quite the same as wandering about a large yet intimate exhibition hall. There you have soft music (I have a sample if someone could tell me how to insert it on the blog) and low lights and hushed murmurs from the crowd as we all gather around each slide, large and backlit which really highlights the rich colours, but it's the next best thing. Go have a look.

And if you would like to help me in my campaign to buy a flat in London, please send cash. Lots of it. Like, oodles.
Posted by A Novel Woman at 8:50 AM

Dang! I'd love to go to London with you. Of course at this point I'll be lucky to get to the border of Wyoming with the way these kids are sucking my wallet dry. Still, I can dream, right?

You may think London is great shakes and all that, but that's because you haven't been to Beaune yet! ;)

Seriously, London is a city I love too. Sadly my financial situation is reather bleak at the moment (received Visa bill from Switzerland trip and realized that the Swiss Franc is actually worth MORE than the Euro, not less as we had believed - ouch). However, I could help you turn a London flat into a European vacation rental so that it pays partly for itself...

Chew on that, baby.

Laura, Oh, I'll chew on that like a big crusty croissant au chocolat!

How weird is it that I dreamed last night I was visiting you? I woke up wondering what the weather was like in the winter, or if it'd be better to wait until Spring....wow. I should unleash my subconscious more often and let it out to run around the yard.

I love London because I go to the theatre every single night I'm there. The play is the thing, dahling, as I'm looking for entertainment.(g) And I end up eating at the same place every day, La Pret a Manger, because it's only fuel not an experience. Oh, except for afternoon tea at Valerie, especially the one near the Ritz Hotel. The overheard conversations alone are worth the trip, although her cream buns are pretty sweet too.

But Paris has my heart. I get all misty-eyed just thinking about walking through the city. Particularly when it's with a loaf of Poilane bread in one hand, and some cheese (oh, the cheese, the cheese), fruit and wine in the other. The consistently fabulous meals anywhere in Paris, which don't compare with anywhere else on the planet.

Well, I guess I need an apartment in both cities. Oui, oui! C'est la vie!