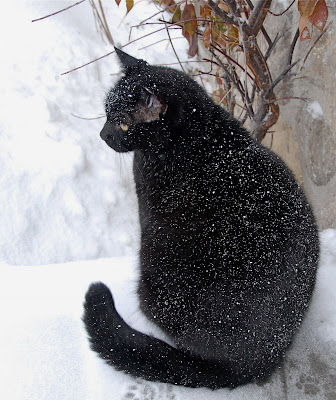 The ice is outside. The fire is inside, or at least it soon will be, as I plan to hunker down by the fireplace with a single malt whisky and wait out yet another storm.

Permit me a small indulgence and let me whinge about the weather for a bit. I'm Canadian. It's what we do, and honestly, it's one of our coping mechanisms to get through winter. I could talk about childbirth, politics, music, dogs, parenting, cats, writing, reading, quilting, wool spinning, stained glass, travel, dentistry, advertising, ancient Rome, intercourse..... (ahem) I mean social discourse i.e. communication or dealings between individuals and groups. Whatever did you think I meant? (And no doubt, putting that word in my blog will contribute to a surfeit of emails not unlike the ones that arrived when I talked about the mushroom shaped like a certain manly bit. But I digress.)

Yesterday afternoon I decided I'd head into our little village to do some errands. We'd had some rain the day before, but it didn't seem that cold so I wasn't expecting the layer of thick ice under a foot of snow which completely enveloped my car. Not only that, but the car had been parked under the shade of a large spruce tree, the branches of which were also coated with ice and snow.

The branches were so heavy, they bent under all that weight and welded themselves to the top of the car.

Which I can't reach.

It's a tall vehicle and I am an undertall woman. (You see how that works? I'm not overweight, I'm undertall!) 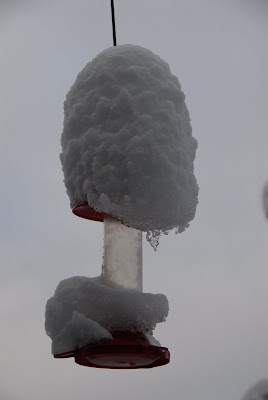 Even though I had less than a quarter of a tank of gas and I never normally let my car idle, I threw environmental responsibility to the wind Just This Once (because there was no way to get INTO my car without softening the ice before I started scraping) and let it run with the heaters on high, as I had left it. Then I realized I'd left my scraper in the car.

No worries. I had a spare! Alas, as it turned out, the spare was also in the car.

I managed to find an old one in the garage (another post entirely) and began to scrap away at the car. Forget scraping, soon I was hammering away with brute force just trying to make a dent anywhere and whacking off the branches of the tree where I could reach. I was afraid I'd break one of the windows but the ice held everything together nicely. After a half hour, I managed to clear the windscreen and the first two windows. Oh, did I mention I was wearing a jaunty little beret and silk scarf? I looked terribly chic as those ice chips flew up and assaulted my (now red and sweaty) face. All this to do a little banking and pick up some things at the drugstore.

I finally made enough headway to be able to drive, and as I took off down the road, I heard the last branch I couldn't reach snap off the tree. At least this time of year people are used to seeing cars with Christmas trees on their cars. Of course, when I got to the gas station, I couldn't get the little door thingie to open, so I had to pound it with my boot, then use a loonie to pry it open. Smarter than the lady in the pet food store, who used her car key and bent it enough so that it no longer fit in her ignition.

That was yesterday. This is today: 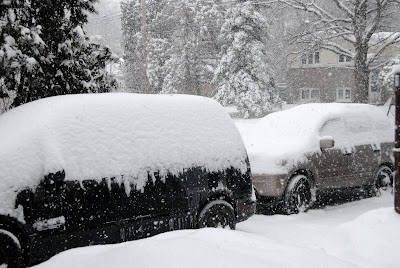 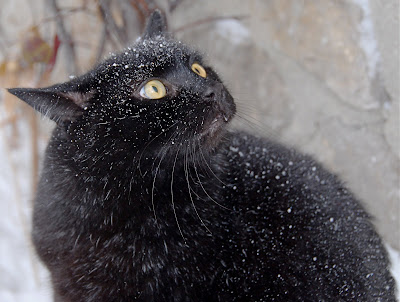 And that old black van on the left? That has to be scraped and cleared of snow, and the paint supplies cleaned out of it, because it's being towed away for scrap on Monday morning at 7 a.m. Seriously. Could my timing be any worse?

Um...wow! What a great picture of your cat! That first pic. The second one, I take it, is his opinion of the weather...

the nice thing about living in saskatchewan is that it's semi-arid. in my lifetime, there have been very few instances of ice that you describe. of course we don't have the lovely tree thing happening unless we plant them, but i don't have to worry about those trees being pasted to the roof of my car (which is also too high for undertall me to reach)

We have a lovely three car garage. We don't park in it. It's where Tim works on stuff.

Maybe we should rethink this.

Debby! You should make him get his own! When I got my three car garage, I made him build a 28 X 36 building in the back to work on his stuff.

Of course, it is also insulated, heated and air conditioned, has running water, an engine hoist and a variety of different machines and tools.

And a cot and blanket on those days he has a brain fart and turns into an idiot.

I adore these 'cold' photos... I visit them regularly to cool myself down. Another 40 degree day here yesterday!!! Its a wild world...
:-)
BB

That last photo of Boris reminds me of the cat from the 'Get Fuzzy' comic. That look he gives when whatever trouble he's started backfires!

You actually make it seem so easy with your presentation but I find this topic to be really something which I think I would never understand. It seems too complicated and extremely broad for me. I’m looking forward to your next post, I will try to get the hang of it!
cash for cars brisbane
cash for car brisbane

Wow, that was strange. I just wrote a really long comment but after I clicked submit my comment didn't show up. Grrrr... well, I'm not writing all that over again. Anyways, just wanted to say fantastic blog!
cash for cars ipswich
cash for scrap cars ipswich

Hi, I am really glad I have found this info. Nowadays bloggers publish just about gossips and internet and this is actually irritating. A good site with interesting content, this is what I need. Thank you for keeping this web site, I'll be visiting it. Do you do newsletters? Can not find it.
cash for cars sydney
cash for unwanted cars sydney

Truly, this article is really one of the very best in the history of articles. I am a antique ’Article’ collector and I sometimes read some new articles if I find them interesting. And I found this one pretty fascinating and it should go into my collection. Very good work.
cash for cars logan
cash for scrap cars logan