Last weekend we had dinner with friends at their Habitat 67 condo in Montreal. I've seen photos of Habitat, and I've viewed it from downtown, but I've never been inside one of the units. The architect, Moshe Safdie, designed this complex as part of Expo 67, initially as an exhibit and it served both as a pavilion for visitors and as housing for dignitaries. Safdie's vision was to build a thousand of these units, but only 158 were completed. Once Expo was over, they turned into permanent housing for a lucky few.

These are stacked, modular units with more than a dozen different floor plans, made out of concrete and designed to give "privacy, fresh air, sunlight and suburban amenities in an urban location." The units are surrounded by water - the harbor was to the north, and the rapids of the Saint Lawrence to the south. It presents almost like a child's set of building blocks left on the floor but it's described as being in the shape of a ziggurat. (Yes, I had to look it up 'ziggurat' too.)

There's real movement and excitement when walking through the complex and your eyes can't stay in one spot long because there's so much to see. Pedestrian walkways zigzag throughout, and there's a covered walkway along the roof to a shared deck area. Despite being minutes from downtown Montreal, you feel as though you are in a special oasis. Each condo is designed to have its own private deck, which then forms the roof of the unit below. It really was an amazing place.

Luckily I had the foresight to bring my camera, because when we went up to the rooftop deck, this is what I saw. See that little black speck in the rapids? 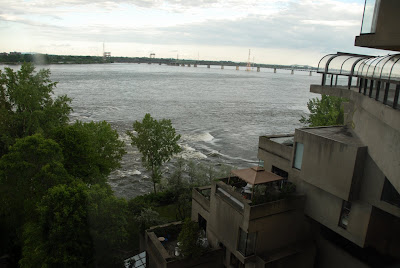 That's a surfer. In Montreal. In the rapids of the Saint Lawrence River. A surfer. 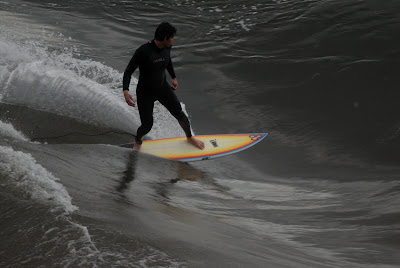 They surf on what is known as a 'standing wave' or stationary wave. This is a spot in the rapids that remains constant, so these crazy souls propel themselves via a giant rubber band into the river and ride the wave until they get tired, or they fall and are swept away, like this guy: 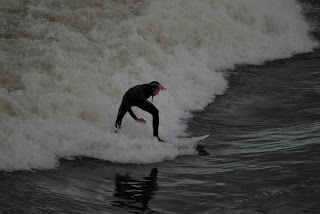 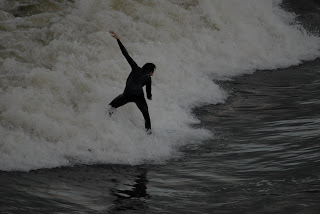 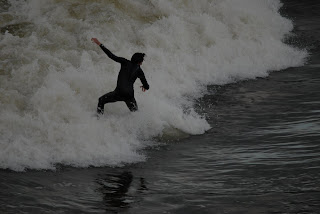 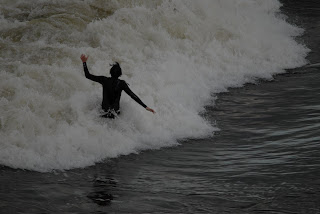 There's also something called a 'recycling hole' which can suck you in, and spin you around and around until you drown. It was freaky seeing these guys fall off their boards and get swept down the river, I'll tell you.

I followed their progress downriver and spied this, our famous geodesic dome, the Montreal Biosphere, formerly the American Pavilion of Expo 67, designed by R. Buckminster Fuller. 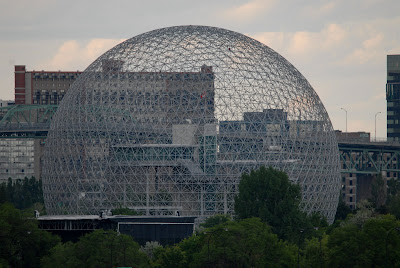 And as the sun began to set, I was coaxed back to the party. The rest of the gang was drawn to the TV and the Stanley Cup playoff game. (Hey, it's Montreal. Hockey is a religion, not a sport.) So I sat on the deck, sipped my drink and ate exquisite appetizers offered by a tuxedoed young man. The breeze lifted my hair and cooled me, the faint roar of the rapids lulled me, and I watched as the city slipped into night. 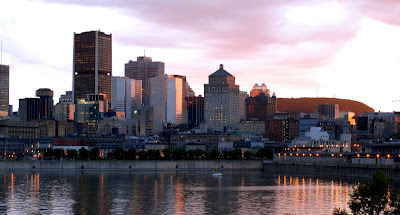 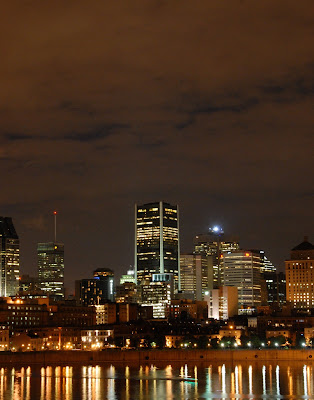 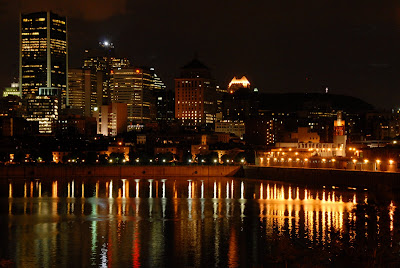 All in all, not a bad way to spend a weekend.
Posted by A Novel Woman at 4:29 PM

Hi Pam,
O.M.G. Your photos are outstanding! You should make a book. Were all these pics taken from Habitat? Just beautiful! Kathy

All of them were taken from the deck or the roof of my friend's condo (except for the first one - that's not mine. Doug wouldn't stop the car because we were late.) It was just an incredible experience.

What a talent you have.

Not a bad way to spend a weekend at all, you lucky duck.

Just fabulous pics of your city - a place you clearly love!!! Wish the images were bigger (I have the same issue on my blog -wish it wasn't so hard to alter) so we could really appreciate them.

Those apartments look a little scary to me!!!
:-)
BB

Bush Babe, you just have to click on the photo and presto, it's bigger. Maybe that doesn't work on Ozzie dialup though.

i really love motreal and i do not go there enough.

i have always been curious about the floor plans in those condos.