Well, looky looky what I did last night 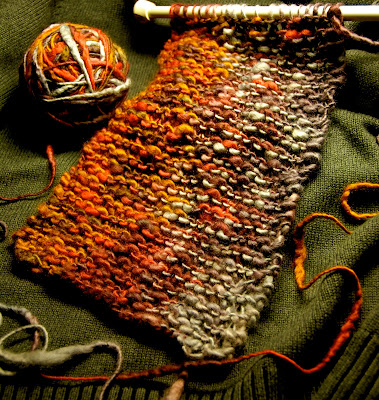 Well, you can look but don't look too close. Yes, the Great Canadian Scarf is moving along at breakneck speed. I like the way the colours are snaking along like big fat stripes. It's hard to see from this photo which doesn't do justice to the rich rust and plum and rosie reds snuggling up to the soft indigo and heather. I'll try to photograph it in natural light. It's very, very soft and heavy, despite the (intentional, I assure you, more or less) holes. 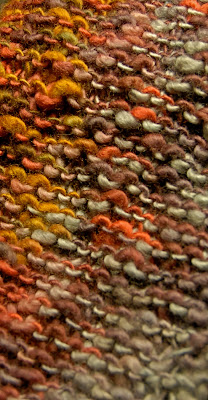 I knit last night while watching TO KILL A MOCKINGBIRD. So many great moments in that movie, no? Of course the court scene is a standout with Atticus's Atticuses' Atticus' ATTICA ATTICA ATTICA!! Scout's Dad's closing arguments, or Scout walking through the woods dressed as a ham, or the scene early on where the lynch mob is turned away by a little girl's innocence. But the scene with Boo Radley hiding behind the door, and little Scout saying "Hey Boo" and the way he looks as her, with such love and tenderness. Then she holds his hand and walks him over to see her brother and says "You can pet him if you like."
Posted by A Novel Woman at 2:01 PM

That is absolutely BEAUUUTIFULLL! Love the colors, the nubbiness (is that a word? probably not) and how cozy it looks. Truly. Could really use one of those here in Chicago tonight!

You never made cornbread? Wow. What do you eat with your chili? Or your spanish rice?

Your scarf is lovely! The colors are gorgeous. I'd like to pet it :) Not Scout's brother tho.

And I too find it hard you've never made cornbread!

Ooooo, I like it! Should I wait for mine in the mail??

YEAH YOU!!!! The scarf is yummy. Perfect fall colors what with that rich pumpkin and the steel gray. I lust after that yarn!

I think cornbread is a US Southern thing--Like Debbie I also must have it with Chili. I add some green chili into my cornbread since I am a southWestern gal.

Is cornbread a Canadian thing?

Mmmmmmmm, so niiiiiiiiice! I LOVE the rich colours.
When Holly swam in the Ivy Finals at Harvard, all the Cornell moms bought new needles and GORGEOUS yarns at a busy little wool shop in Cambridge and we all sat in the stands, cheering on our girls and knitting up beautiful scarves. (The dads all thought we were crazy.)
Why is knitting so addictive? I see yours and I want to play too!!

Wow, I love it - It makes me want to try knitting one!

I think you need a whole new section to your blog -- A Novel Woman Knits!

I love this step-by-step process. I have to say, it would be more appreciated if I had some cold weather to go with it... and as for cornbread, intent on making my first ever batch from PW cookbook when we get home from hols...
:-)
BB

Debby, I don't know what Spanish rice is, but I eat my chili on TOP of a crisp, iceberg lettuce salad with a dollop of sour cream. My kids eat chili with a sliced baguette.

Now, cornbread is something I never ate as a kid and never thought about making. (Confession: I never had a salmon salad sandwich or rice pudding as a kid either. Can't say I care for either now.)

However, when my husband came home and had a big chunk of warm cornbread slathered in butter and jam, he told me his mom made it all the time when he was a kid. They had it when they come home cold and shivery after swimming (during the winter months at the local indoor pool) and she served it warm with maple syrup. So I don't know if the average Canadian makes and eats cornbread. I never did until today!

Yutha, we could do a swap. You know what I want, right?

Brenda, you should definitely start a new project and we'll bring them to camera club meetings. Next thing you know, we'll be knitting beanies for You Know Who.

kc...ah, no. That would imply other projects and all I can do is knit a straight row, over and over and over.

BB, I'll have to check PW's cornbread recipe and see how it compares. Not that I'm an expert now or anything.

I LOVE your scarf! It's just beautiful.
And knitting and watching To Kill A Mockingbird.....could there be a more perfect thing?

How I love the voice overs in that movie.

I can't believe you say you're struggling with knitting and then talk about whipping up cornbread! Bread - even though I finally made some for the first time over the last couple of months - remains a mystery to me. Knitting on the other hand, is a joy (unless I knit something that requires sewing later. Sewing, ugh.) - and your scarf is simply gorgeous! Very inspired of you to switch to the bigger needles - the more quickly you progress the more fun it becomes, cos you can actually see the wool turning into something in your hands... Lovely!

No yeast in cornbread, Deniz. That's why it's so easy. However, I do make yeast bread all the time. The key is to mix the dough in a bread machine (you can buy a good one for under $100 and I actually bought one at Walmart for $49) and then I braid the dough on the counter and throw it in the oven. It's what I bring to dinner parties and people go gaga over it. Honestly, it's so easy I SHOULD feel guilty but I don't.

I have an easy, no yeast bread from my grandmother that is a favourite of my kids. I'll post a recipe here this weekend!

Oh, for the record I sew too, and quilt by hand.(g)

You scarf is truly beautiful; it's all about the yarn...and big needles! You just might inspire me to make another one but this time with REAL wool....