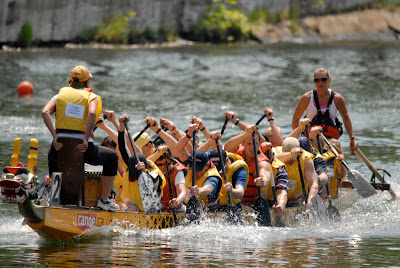 First all the good news. Another year, another mighty Dragon Boat Race to raise money for Missing Children's Network. It was a banner year. Record amounts of money were raised in one day, all of it going to an organization devoted to finding missing children. We are a team made up of friends, neighbours and families from Lake Louisa who come together on this day to raise money for charity, and have some fun together.

Once again, our team came in first, and we raised the most money, and we had the single biggest contributor on our team (Go Claude "The Pad Man" Montcalm and Johnson & Johnson Bros!)

How much $$ I hear you asking? 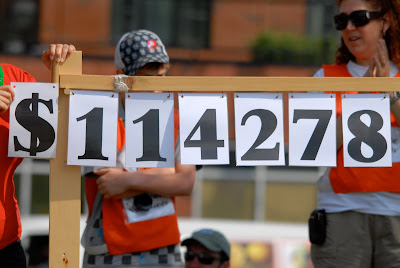 Now, I don't row in the race (I have weak arms, yeah, that's it. Plus our captain asks everyone to give him their weight so he can balance the boat. Sheeyah. I don't think so. Drag ain't just high heels and a shiny dress...it's what will happen to the boat if you put me in it and ask me to paddle.)

However, I do volunteer to take photos and put together a slide show for all the participants. Last year, Captain Tom and his lovely wife Claire hosted a huge backyard BBQ at the lake and we ate, sang, watched the race highlights and then danced by the light of the moon like we were all teenagers again. 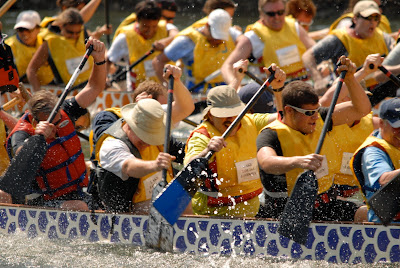 We dedicated this years race to Ed Wight. He was a retired Air Canada pilot who was anything but retiring. He was a bon vivant, a family man, a loving husband, and a great friend to many at the lake. He died doing what he loved - fishing with his buddies. His two grown sons took part in the race this year. And one of them won the grand prize - a trip for two, anywhere in North America.

So there was some sad news and very good news on this day.

But what about the terrible, rotten crummy news?


My favourite lens. This baby goes with me everywhere. It is a Nikkor 18-200mm that can zoom up close and personal, or go wide and capture everything there is to see around you. It is the camera equivalent of the Basic Black Dress. I love it. Correction, loved it.

Since I don't row for the team (our family was represented by my son) I photograph the heats, and the final race. Yesterday was hot. I was sweating, and I was fumbling with two of my Nikon lenses as the last qualifying heat was about to start. I shoved my 18-200mm lens in my pocket and got my loooong 150-500mm lens on the tripod and bolted on the camera.

I felt like the lens in my pocket might not be secure and I didn't want it to bang into the tripod, so I quickly shoved it in my shoulder bag. The whistle sounded, I began to shoot frantically, knowing the race would be over in mere minutes. Zoom, focus, snap a shot, pivot on the tripod, I didn't waste a second. As the boats raced through the finish line, I leaned in to get a farewell shot of our boat, my bag swung forward, and....I tipped the lens onto the grass in front of me, a couple of feet from the edge of the canal.

Now if this had been a putting green and my lens had been a golf ball, this would have been the money shot. My lens (which could have rolled towards me, or rolled to the right, or to the left on the grass) actually bounced and rolled directly towards the water. It skittered at the cement breakwall, hesitated for a split second then plunged into the dark depths of the canal.

Yes, my favourite lens is at the bottom of the Lachine Canal. Even assuming it was visible (it was not) and I was able to fish it out (I was not) it would have been filled with water and ruined.

I felt terrible. Awful. I kept running the movie in my head, over and over, wondering if I had just lunged for it, could I have saved it? Or would I have knocked the entire camera and other lens in as well? And maybe I would have plunged headfirst into the canal.

It took the shine off the rest of the afternoon. I couldn't fully get into the final race, nor cheer as loudly as I ought when we won.

Then I remembered where I was. Sure, I lost a lens. Yes, it's going to cost a lot of money to replace it.

But it can be replaced. I looked around at the people volunteering at this event and I realized many of them have lost their children. Their beloved children are out there somewhere, maybe abused, maybe dead. Some have their children returned to them, and some of those children were there at the event. But many are gone forever, their families wondering if and when they'll ever get news, any news, about what happened.

Puts losing a lens into perspective. 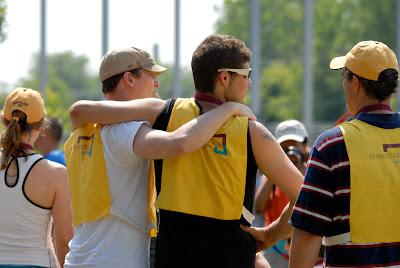 Great news about raising all that dough. Sorry to hear about the lens. I guess swimming down to the bottom of the canal to get it wasn't an option. Sigh.

Even if I had, the lens would be ruined. They don't take kindly to water.

I am sorry about the lens; good news about all the money that was raised for such a great cause. I bought a photographer's vest over the weekend. I fret all the time while changing lenses that I am going to drop one. I hope that the vest takes away the worry I feel while changing lenses. I hope, too, that I won't be too hot wearing it!

I knew the photographers out there would get the gravity (no pun intended) of the situation. This was my baby. It hardly ever comes off my camera. Ah well.

Linda, I heat up like crazy when I'm photographing. I told someone it's like you're constantly doing yoga poses, bending, freezing, holding still. It's a workout! At least, that's what I tell myself.

Terrific post girlfriend. So sorry about the lens, but am glad you put a good spin on it.

Was out with the hellhounds last week when little guy finally decided he wanted to run, as Spark and I wanted. I had no time to secure my phone. New iPhone smashed into the pavement and I was shocked to see the screen smashed.

The good news is that I only had to pay a little bit (compared with the price of a new one) to get the screen replaced. Didn't know they could do that. The repairman is a former Buddhist monk who now fixes Macs, which is a story for another day.

Anyway, as always, you have a lovely outlook on things.

Man. I hate it when I lose something. I hate it even worse when I know exactly where I lost it, and can't get it. Knowing where you lost it and knowing that even if you did rescue it, it would not be any good, oooh. There must have been a whole lot of teeth gnashing going on. Glad you could put it into perspective, because really, you are right. As much as you loved that lens, there are people out there who have lost even more than that.

LG, I want the story of the monk repairman! And I once dropped a cell phone in the snow, then ran over it with my car. It worked but only for outgoing calls. The screen was ruined. I also dropped a portable phone into the lake and that too was wrecked. I just shouldn't hold things near water, or precipitation in any form.

Hey, did you just have a birthday last week?! Happy Birthday!!!! Belated, but none the less sincere and heartfelt.