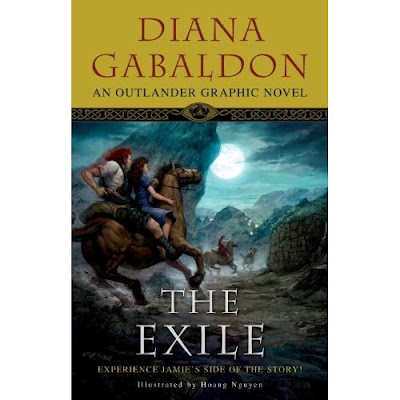 This is a bit of a departure for Diana (or maybe it's a bit like coming full circle since back in the day, she famously wrote comic scripts for Walt Disney featuring Donald Duck, Uncle Scrooge and Mickey.)

I have had the pleasure of knowing the incomparable Diana Gabaldon for many years. In fact, some of my life's adventures have ended up in her novels, including a skunked dog, a mangled fingernail, and of course, many squirrels both alive and dead (which is the way I prefer them.)

So now, Diana has something new and very exciting to offer. It's called THE EXILE: An Outlander Graphic Novel. If you're a fan of hers, you'll probably know about this already because it's vaulted to #1 and is already in its second printing! If you haven't read Outlander the novel, do yourself a favour and read it first. It's one of my favourite books ever and well worth tracking down. It's truly "unputdownable" and if you read a chapter or two, you'll see what I mean.

Actually Random House is celebrating the 20th anniversary of OUTLANDER with a contest. You could win 10 free copies (one for you, nine for your friends.)

Go HERE to see details and to enter the contest.

Random House is also giving away free Kindle copies (for a limited time) so check that out HERE. (I don't have a Kindle, but I do own several copies of OUTLANDER. I like to give them out to friends.)

Or go to your local library because they'll have it for sure. Then set aside a good chunk of time to read. You won't want to do anything once you start, so plan accordingly. Just sayin'.

Here's the trailer for the new graphic novel. Me? I'm hoping my copy arrives in time for the Surrey International Writers' Conference next week so Diana can sign it! Hurry up, Indigo. Come ON already. How many clerks do I have to pester/cajole/threaten? (Note: I usually support my local independent book stores whenever possible, and I actually had a copy in my hand two days ago, but I had already ordered my copy online thinking it would arrive more quickly. Ha! Wrong. Do you hear that Indigo? Hurry UP!)

That was YOUR fingernail??? O_o

I grabbed my copy of Outlander. I have the Kindle app for my Android phone so that's a good thing :)

Sure was. I dove for my cat not realizing there was a piece of wood loose on the wood trim by the door. The shard (it was NOT a sliver) skewered my nail, underneath the nail bed, right down to the first knuckle.

It were bad...made all the interns wince and hold their privates when they saw it.(g)

But the nail grew back and alls well with the world.

Ewww! I still cringe when I read that scene! I'm not trying to sound horrible, but I think I'd as soon had them take my finger off with that one! No wonder everyone was wincing in the ER.

I'm glad all is well now though.

I've read all of Diana's books, then some time ago beginning hearing about the graphic novel while it was in progress. Now, it's finally here. How cool!

NM, it wasn't as bad as it sounds. I mean, it hurt like the blazes when I did it, but it went numb very quickly. Then they froze my whole finger before they removed the nail. Didn't feel a thing. It healed 100% and the nail is right as rain.

Malcolm, the book is beautiful.