A trip out east and a trip out west 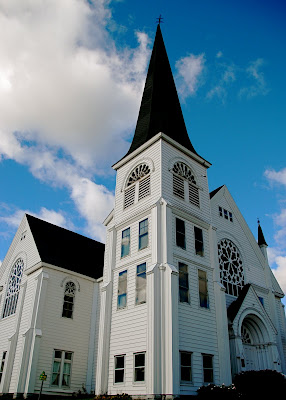 (Does this steeple look crooked to you? I blame the architect, James "Wonky-eyed" Johnston, and not the photographer.)

Last week I was on the east coast of our great country, just toodling around New Brunswick and Nova Scotia, and this weekend I'll be on the west coast at the Surrey International Writers' Conference (the best little conference in the world, I tell ya.) I really should get me to the prairies one of these days. I have flown over the prairies numerous times but I've never actually been there i.e., had my feet on the ground. Anyone know of a good excuse to visit Saskatoon? Moose Jaw? Medicine Hat? I'd like to come see you sometime because you look gorgeous from 30,000 feet up in the air. 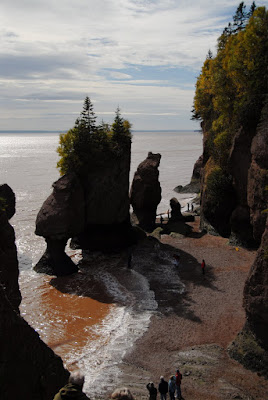 Anyway, while I was on the east coast last week, I visited the Hopewell Rocks on the Bay of Fundy, an uber cool place with flowerpot shaped rocks carved by the ocean and the highest vertical tidal ranges in the world. I managed to arrive just before the high tide came rolling in and had about half an hour to wander down on the beach surrounding the rocks. During low tide you can literally walk way out on the ocean floor. At high tide, you can kayak around those same rocks which will now be either completely submerged or pretty little islands with a few wind-scrubbed trees. 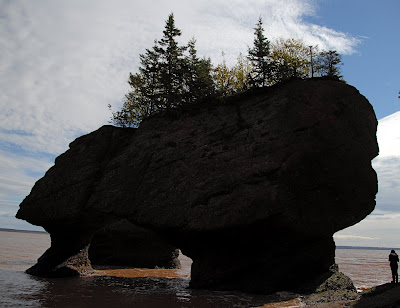 The tide comes in so fast and high that the park has a guide at the water level to keep people safe. The tide rose 40+ feet the day I was there, and I could see the seaweed on the walls of the cliff and the flowerpot rocks themselves. 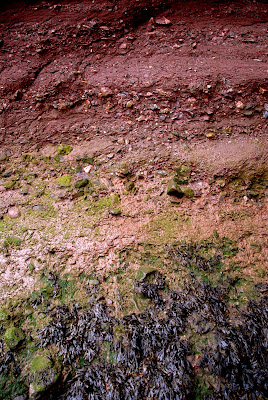 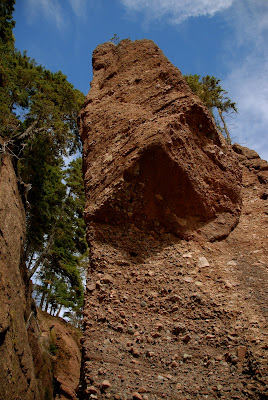 To give you an idea of how fast the water in the Bay of Fundy rises, the guide pointed to the water washing up on the flat beach at our feet and said, "See that? It looks like a gentle beach with lapping water? Well, that's rising about a foot every 30 to 40 seconds." Seconds. That left less than five minutes to get back to the steps leading up the cliff as 100 billion tonnes of salt water coming thundering into the bay. (And that's literal, not like "I have 100 billion tonnes of dirty dishes to do. Although I actually do.)

See the steps at the bottom of the photo? The water reached them in minutes. I've never been so inspired to climb stairs. There are signs that give advice like "if you find yourself stranded by the incoming tide, do not attempt to climb the cliffs, just find yourself a rock not covered in seaweed, climb on top and wait three hours until the water recedes." Sheeyah. You would hear my screams all the way to Yellowknife. (Another place I want to visit. Just saying.) 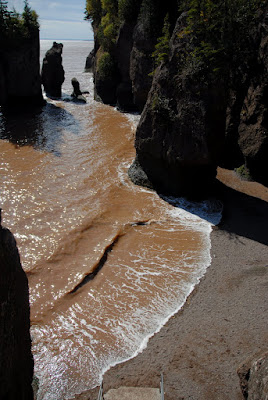 Just for comparison, tides in other parts of the world go up and down about 3 feet on average.

Thus endeth the lesson on tides.

We also saw a tidal bore on the "Chocolate River" in Moncton without a speck of real chocolate in it, sad to say, but in reality, a churning, brown devil of a thing. Speaking of which, here's a public toilet we passed on the road. In case you had any doubts, each side had its own unique signage leaving no doubt as to its purpose. 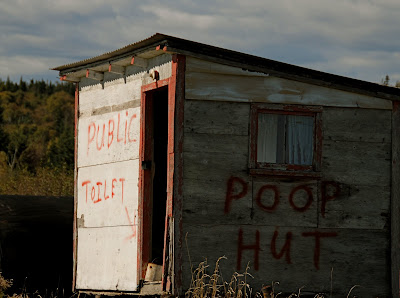 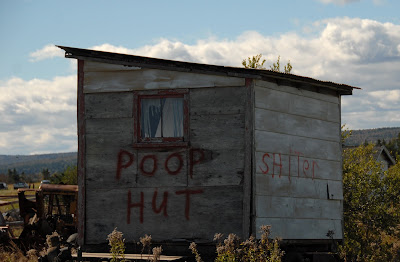 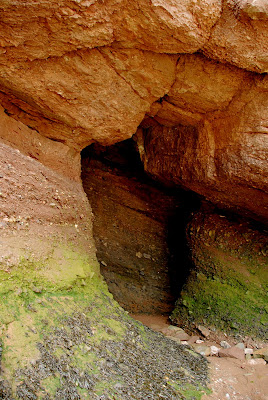 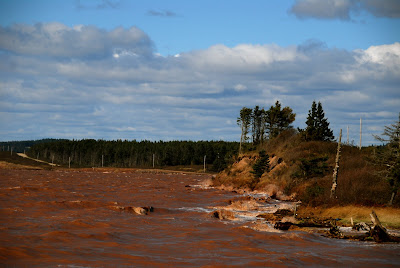 DUDE. I live in WINNIPEG. Come visit, and I'll drive you wherever you want to go. Excuse enough.

Oh, I've been to Winnipeg and I loved, loved, LOVED it. My inlaws lived there, right on the river on Jubilee. And don't forget my uncle the professor who also worked on the dyke. (There is a bad joke there, but I will not touch it.)

But I've never gone westward ho. (That's a rallying cry, not an epithet.)

having been raised in moose jaw, i can tell you it's a nice place to be *from*. they do have a nice spa there and there are the historic tunnels that were supposedly used by rum runners during prohibition. al capone was supposed to have come there as well.

saskatoon is a very pretty city. there are museiums, an active theatre culture (several companies), wanuskewin - a first nations' museum and research facility, the university, a symphony and of course, me. :D

Tim and I want to head west when we get a break. We have a number of friends who live in very cool places, and we would like to see them. (the friends and the very cool places too.)

There you go, already an invitation to visit Winnipeg and Moose Jaw. Awesome. Anyone from Yellowknife?

I've always wanted to drive across the country from sea to sea (I almost wrote Sears, but I guess that works, too.) Maybe I will. However winter is probably not the best time to do this.

Probably not, pal. Wait until spring, and then go off gallivanting. I don't live in Yellowknife, but if I did, I'd be inviting ya.

Thanks for the post, I don't know if I'll ever get to see Hopewell Rocks on the Bay of Fundy with my own eyes. I can only hope that I get to see half the places I'd like. I'm always fascinated with strange bodies of water, such as Crater Lake in Oregon.

Me too! I love water - strange bodies of water (flying over Salt Lake on the way to Hawaii was awesome) and oceans and dark lakes surrounded by pines and birches. As long as I'm near water, I'm good.

Julie K., don't you be surprised if I show up knocking at your door some day in the future. A real prairie farm? For real? (le sigh) I'd like that. I need to see more of Canada. A lot more.