Kris Carr and why happiness is important 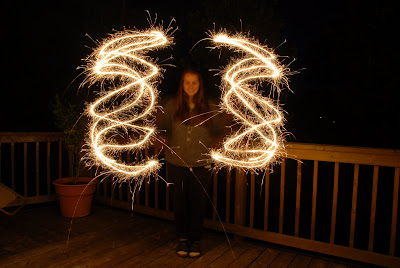 She is some kind of awesome.

I read an article about her (I hope the link works) in today's New York Times Magazine. She calls herself a "wellness warrior" and if you are fighting cancer, or depression, or migraines, or any other illness - chronic or acute - that is threatening your ability to live your life to the fullest, then Carr's website is worth a look. It's not sad and it's not preachy, but informative and uplifting and funny.

Her website leads to a documentary she made in 2007 about a young woman "looking for a cure and finding her life."

And here's her equally wonderful blog.

She asks the question:

"Why, when we are challenged to survive, do we give ourselves permission to truly live?"
Why is this, do you suppose? Why do we feel so guilty for seeking out pleasure and fulfillment?

That's the big question. The little one is do you eat enough fresh veggies? One of the things she promotes is lots and lots of vegetables.

I believe in the power of veggies! To quote that famous pusillanimous lion, I do believe, I do I do I do. And here is my first home-grown crop of tomatoes to prove it. 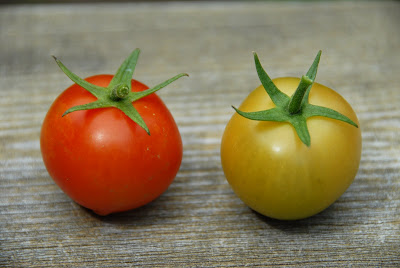 Sure they're tiny fellas, but they're pretty tasty with a sprinkling of sea salt and a side of bocconcini cheese and a drizzle of olive oil and I grew them myself. Doug keeps asking if they're cherry tomatoes, and I keep telling him no, they are normal tomatoes. (I actually don't know what they are. I bought the plant on a whim for $5 at a farmer's market. But I am becoming defensive about his size-ism. These are just as good as those big beefsteak showoffs.)

Earlier tonight, I had to defend my crop against marauding raccoons. Actually, the family of raccoons were busy unscrewing the "animal proof lid" on my birdfeeder which was right beside my tomatoes but I'm sure my baby tomatoes clinging to the vine and calling for their mamas were going to be their next course.

For those of you who care about my well-being, the thumping and screaming of those raccoon babies in the dead of night on my deck just a few feet from where I sat calmly reading almost killed me on the spot from the shock. Then I was relieved it wasn't a bear, which had been my first thought. (Actually my first thought was that it was a thief. Then bear. Then I ran out of options until I saw beady little masked eyes staring me down.) I banged a pot, kept the Budster from bursting through the screen door with a well-placed foot, then dropped on the couch and tried to breathe normally again.

That can't be healthy.

But these puppies are. 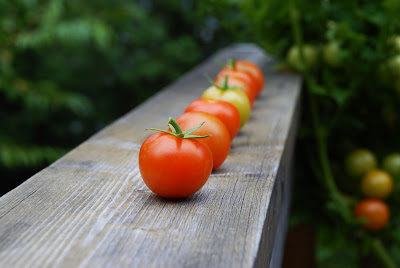 Aren't they lovely? When you've finished basking in my awesome farm skills, go check out Kris Carr.
Posted by A Novel Woman at 8:49 PM

I love "...informative and uplifting and funny" -- I'll definitely have to check her out.

And your to-mah-toes are gorgeous, dahling! Nothing beats the flavor of homegrown. :)

So. What you're saying here is that size doesn't matter?

I have learned a new word: bocconcini.

I've read this woman before, back when she was a blogger. Thanks for the reminder! I think though, that I'm naturally moving in the direction. It is a good thing.

Uh, can I just say I'm glad I left before that little production on the deck? I would have had to change my drawers. On the other hand, cool picture! Send the rest to the kid, won't you please? Hope you had a nice weekend.

Debby, I see similarities too. You have the same get-'er-done attitude and that's a good thing.

Lisa, you would have shat yourself. I almost did. I thought it was an intruder! At 1 a.m., all the doors WIDE open....sheesh.