A Little Visit to Halifax 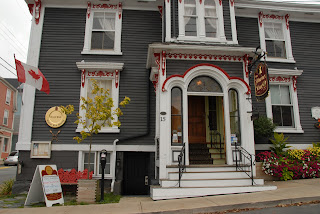 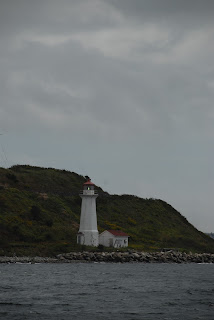 Doug had a conference in Halifax last weekend so while he talked teeth and gums with all his pals, I got a chance to wander around Halifax and the south shore of Nova Scotia. And I met Eldest's boyfriend's parents, who are the nicest people you could ever hope to meet. And really, would you expect any different? The Boyfriend is a sweetheart and the east coast is one of the friendliest places on the planet.

I have always loved Nova Scotia. I put in a request with my beloved to move there thirty years ago but Dr. Doug wouldn't budge. He'd just bought his practice right before we met so he couldn't go anywhere but Montreal. We were staying at a B & B in Annapolis Royal and the two ladies who ran the place invited us to stay for a lobster dinner, even though it was not included in the price (see, I told you they were the nicest people!) And over dinner, they pitched the idea of us moving there because the town dentist was retiring and they thought Doug would be perfect. (They're nice and they're smart.) The practice even came with a house "and a crystal chandelier" (important in a dental practice) but it didn't pan out.

That summer before we got married, we took two weeks to drive around New Brunswick, Nova Scotia, along the Cape Breton Coast and all the way over to P.E.I. (back in the days when you had to go by ferry) and it was one of the best holidays we've ever had. Doug ate chowder every day, literally every day sometimes twice a day. You can't find better chowder than east coast chowder. Ditto fish cakes. And hodge podge, ooh, that's good. Do you know hodge podge? A lovely lady in Chester Basin made it for us for lunch. It was another B & B, an old frame house looking over the sea, with a garden buzzing with hummingbirds. Hodge Podge goes like this: you take as many fresh vegetables as you have on hand, and you layer them in a pot with cream and butter. You start with the veggies that take the longest (e.g., new potatoes, carrots) and you add the others (green beans, yellow beans, turnip, etc.) and you cook them for about 45 minutes until the vegetables are tender, then you spoon them in a bowl with the cream and serve it with crusty bread. Voila, a dish that "feeds the soul" as they say in N.S.

So this time around, I walked along the new (well, to me) boardwalk in the city, dined at the local restaurants, visited the Maritime Museum (exhibits about the Halifax Explosion in 1917 and the Titanic recovery) and watched Canada's only handblown crystal makers at work. Originally from Ireland, these Irish crystal makers decided after their Waterford factory closed that they would keep the tradition alive, so they moved to Nova Scotia. These men (they were all men) had to apprentice at for at least 8 years before they got to the master craftsman stage. They moved like athletes, everyone knowing their place in this choreographed dance with molten crystal. I was awestruck, and that was before I walked in the shop! I bought a little wedding gift for some friends and a birthday gift for Doug - single-malt glasses in the "Titanic" pattern, inspired by the light fixtures in the 1st class cabins. (No worries, he doesn't read this blog so the secret is safe until this weekend.) And I may have bought a teensy piece of something for moi.

If you want to read more about this Most Excellent Crystal, go HERE. 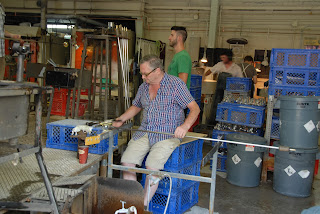 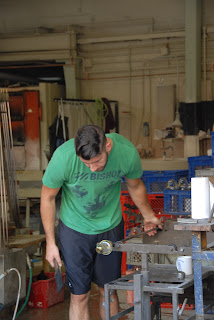 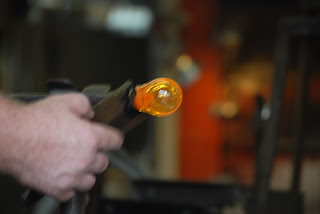 You would LOVE this place.

Love the photos. I still haven't been to Halifax! :-(