No, not those Stones. There was no Mick or Keith in sight. I'm referring to a lecture tour about building stones used in some of the historic buildings in Montreal. It took place just a few minutes walk away from my new digs this afternoon, so I hoofed it over to McGill and joined the group. 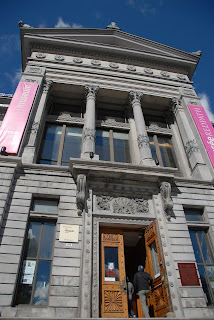 The Redpath Museum, where the tour originated, dates to 1882, and is the oldest building in Canada built as a museum. It's also part of the science faculty of McGill University. It's mission is "to foster understanding and appreciation of the diversity of our biological, geological, and cultural heritage through scientific research, collections-based study, and education."  (I know, I know. Blah blah blah Ginger.) In brief, it holds the collection of Sir William Dawson, a Canadian natural scientist, who collected a lot of stuff. There are over 3 million objects crammed in this building - extinct animals, fossils, and the second largest collection of Egyptian antiquities in Canada (the first being the ROM in Toronto. Hurrah. All together now....we're number two, we're number two! But where would you rather go to gaze at dusty mummies? Toronto? Or Montreal where you would also go for a plate of oysters and glass of Chardy on the terrace? Exactly. And don't shoot me. I can poke fun at Toronto all I want because I was born and raised there.)

I arrived breathless (because Doug said it was a 10 minute walk over there and it actually took 20 at full speed) and looking like a kitchen skivvy, so the tour guide took one look at me and directed me to the water fountain. (This happens to me a lot.) She claimed it had "the best water in all of Montreal." And it did. But I wasn't there for the water. I was there for the stones!

So off we went to peer intently at the exteriors of a few buildings on campus, then along Sherbrooke Street, weaving amongst the well dressed families out walking their kids and dogs. The funny thing is, I had just photographed many of these same buildings last week. Back then, I had only seen the architecture, the flower boxes, the windows, or the way the light and shadows danced on the stone. I hadn't really looked closely at the stones themselves.

Take this place, for example. It's the Mount Royal Club, built in 1906. Last week, all I saw was an attractive building. 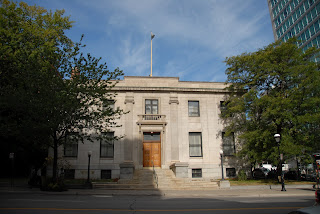 Today, I peered closely at the stone wall surrounding the building and saw these 470 million-year-old sea snails, or gastropod molds, all over the place. 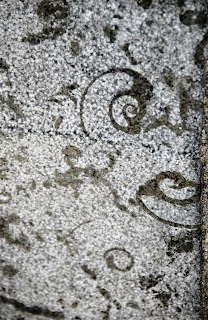 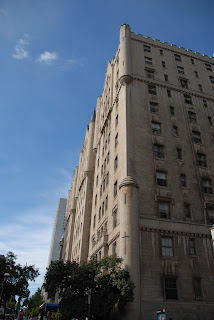 Last week, I saw an apartment building built around 1925 (above and below) 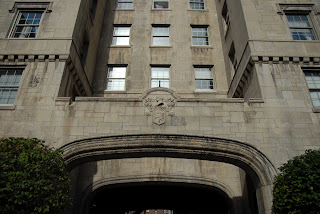 Today I discovered that the building is made of Tyndall limestone, some of the most distinctive rock found in Canada. This is the same rock used to make the Houses of Parliament in Ottawa. It is also  470 million years old. And if you look at the stone walls, literally inches from your nose as you stroll along the sidewalk, you see this: 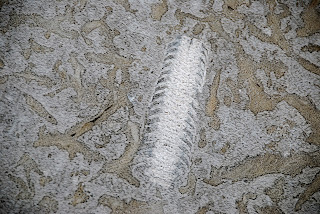 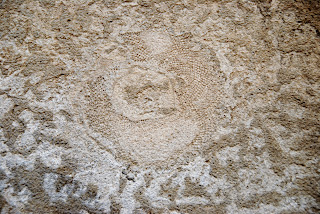 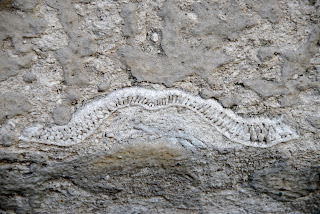 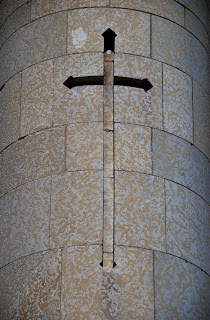 Fossilized worm burrows from shrimps and crabs that slithered through the ooze on the seafloor! 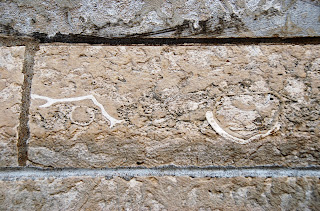 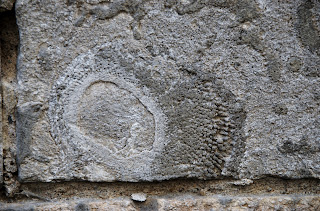 It's right there! You can just reach out and touch them!

It was pretty amazing to see all of this at our fingertips, literally right under our noses the whole time. As I walked home, I looked at all the stone walls on my walk with fresh eyes. And sure enough, as I went for groceries, I looked more closely at a wall I'd passed dozens of times on my walk with the Budster. If you look past this graffiti: 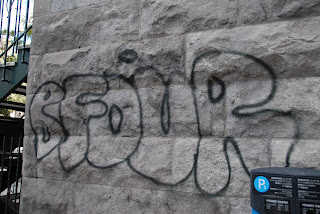 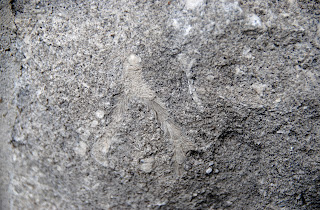 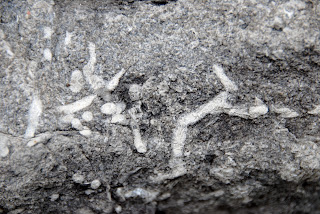 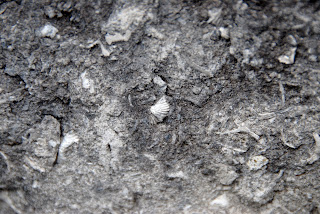 And this funky looking grotto! 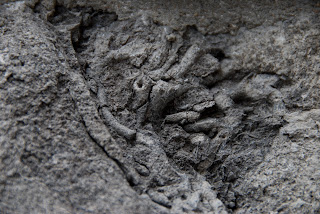 I really love this city. More soon, including some mystery bricks.
Posted by A Novel Woman at 3:33 PM

Very interesting post! In mi website www.paleourbana.com you can find other locations with urban fossils all over the world. Would you like to contribute to Paleourbana's map with your photographs?