A change is gonna come

I don't know how to say all this without sounding like a total wingnut, but that's never stopped me before so....

This is a story of a blue sky, a lamp standard, a number, a vapour trail, a snake and a Seal.

Writers see symbols in everything. We can't help ourselves, and for a writer, life is one big metaphor. All we have to do is pay attention.

After attending the amazing Surrey International Writers' Conference, I came home renewed, uplifted, almost manic in my zeal to get the words on the page. Something happened. There was a profound shift, and I don't want to use the word epiphany (although I just did) but it was BIG. Thank you, Vicki Pettersson. Thank you Jack Whyte. Thank you Eric Walters. Thank you Diana Gabaldon. I feel like I've come out of a twenty year coma. 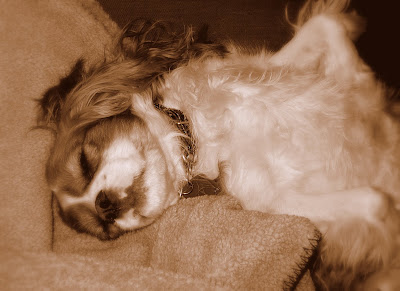 At the conference there was one low moment for me, and one beautiful moment of grace I felt honoured to witness. Sometimes you need the one to help you see the other.

So, I've been working like a madwoman all week, borne aloft by a warm current of love from good friends and mentors alike, which is unusual for me because I'm often a sloth when it comes to hard work (see photo above.) I now feel joyous and hopeful and charged with energy and inspiration. That's the power of the SIWC. I got so fired up today that when Buddy and I stepped out for our daily walk, I found myself skipping along the road. Sideways. While singing out loud to my iPod. (As if my neighbours needed more examples of my lunacy.)

I always flip on my iPod to the first song and just run through the same list. I didn't even download the list, my husband got it off his playlist. I didn't even know what the song was called. I've just always liked it because the upbeat tempo is perfect for walking.

It's Seal's CRAZY. "We're never going to survive unless we are a little crazy," he sings. Yes. YES! I noticed the cloudless blue sky, and felt the sun on my face and I felt crazy happy.

I looked up and I happened to be standing directly under a light standard (because I felt tears welling and that's what women do - they tilt their heads back and roll their eyes up and blink.) These are the same lights that have lined the street for the twenty years I've lived here, but I noticed that the one directly above me was the only one turned on. At high noon. And there was a large, black "7" on it, which you can only see if you stand directly under it and look up which I'd never done before.

The number seven was something my first boyfriend and I used as code. We'd say "seven" to each other, or squeeze each other's hand seven times. It drove our friends nuts, because we wouldn't tell them what it meant. (Come on, give me a break. I was a kid.)

I thought about the weekend, everything I'd seen and heard, the bad and the good, and I noticed a vapour trail in the cloudless sky, only one, and it divided the sky neatly in half, the earthly and the divine. (Please, if you're a scientist, do not tell why this is incorrect. Play along with me.)
I continued on, up the loop over the highway, around the senior's residence where I like to imagine the residents smiling as they watch Buddy leap around like a dolphin in the grass. I thought briefly about the only low moment of the weekend, then looked down as I almost stepped on this tiny snake, writhing in discomfort on the sidewalk between the railroad tracks I had just crossed. I could have kept going, but it was hot and dry in the sun so I tied Buddy to a post and placed the snake in the grass. I don't know if it survived, but at least I did my part. (I know a lot of you are thinking "what would she have done if it was an injured squirrel?" but let's not go there. It'll take the story in a whole new direction.)

I decided, right then and there that, to paraphrase Seal, in a world full of people, I choose to fly.

I came home and googled Seal so that I could check the lyrics for this post. And what pops up? His new CD, due to be released on Monday. The title?

A Change is Gonna Come

HAVE A WONDERFUL WEEKEND EVERYONE!

(a little addendum: I was recapping this story for my husband, and when I got to the part about the street lamp I used the actual street name. It's a street we use every single day so I used it without giving it a second thought until he started laughing. I said, "It was on Angell Street, just above Church." I mean, come on. Seriously.)
Posted by A Novel Woman at 9:55 AM

But you ARE a total wingnut, and that's why I love you... Beautiful writing and Great post--I'm going to check out this song!

Lottery Girl, you are in a good position to judge whether or not I am a wingnut. What is that expression? It takes one to....

Thank you for the good vibes. You can't know how much they're appreciated. And I'm honored to be in your life.

Want to hear something weird? Yesterday, they mentioned something about Heidi Klum (Seal's wife) on the radio and I started thinking about Seal - couldn't get him out of my head, wondering where he was from etc. I don't listen to his music, have never thought about him before. Hmmmm....

Vicki, I feel the same way. You rock.

Yutha, I went along Angel today (and it is spelled Angel, not Angell as I thought!) and the same single lamp was lit again. I took a photo of it, because I know I probably sound like a loony. I mean, if I read any of this in a novel I'd be rolling my eyes, and by the time I got to Angel above Church bit, I'd have tossed it against the wall with a big "come ON!" But when the universe is trying to tell you something, you'd better pay attention.

Wanna hear something even stranger?

And thank you, Kitty Kat! You are the best, you Celtic Queen.

Hooray for inspiration! Great post. As you know, there are many people (including moi) always eager to read your stuff. Write on!

What? What? What's something even stranger? Don't leave me hanging cruel sister...

Ah Laura, I'm looking forward to your book on living the good life in France.

Yutha, darling, the post is strange enough as it is without adding any more whoo whoo stuff. Let me just say, life will show one the path IF one pays attention, and if one doesn't, one might find oneself bonked over the head with signs until one Wakes Up and accepts it.

Freaking fabulous... you see how I lashed out with some foul language right up front? Tee hee. And for the record, I do NOT regard you as a Potty Mouth (you and your gorgeous mates!) - but wonderfully colourful and EXPRESSIVE!!

Back to this post... you know you are a riot, right? You make me feel so at home, here at your blog. You could easily be me. (At least with the messy bit). Except you can REALLY write. You stepped on a snake? Are you for real... that would create an entire week of blog posts for me... gads!
:-)
BB
PS My word verification is "underaz"... does that mean I don't swear enough??

Bush Babe, we were twins separated at birth, I think. Why did mom take you to Australia I wonder? Never mind, I feel equally at home on your blog.

And are you kidding me? YOU can really write. Seriously.

As for the snake. I NEARLY stepped on him, but didn't.

He was teeny tiny, probably a harmless baby garter snake. I have never seen one around here. At my cottage yes, and once one with a chipmunk-sized bulge in the middle of him. So I was surprised to see one here. And we don't have the poisonous snakes you have. I love snakes, but those would send me running for the hills.