How to make lemonade when handed lemons

I say "handed" when I really should say "I picked up" because I did this to myself.

I couldn't figure out why my photos had suddenly gone all grainy. I blamed my new lens, a Sigma 50-500mm. Except that this was happening with all my lenses. Maybe I was just too far away from my subjects and that's why they weren't tack sharp? Maybe it was the light? Or, maybe I am an idiot?

I was at the cottage last Saturday, and as I stood on the dock early in the morning, I looked down and saw a tiny white feather on the surface of the water, which at that time of day was dead calm and black. As this little feather came closer, I could see the little bits of down were soaked with dew, like tiny crystal beads. It was beautiful, so I quickly took some shots before it disappeared under the dock. I was so excited I immediately loaded the photos to my laptop, and was crushed to see the same problem crop up again - over-exposed, grainy, blurry photos. 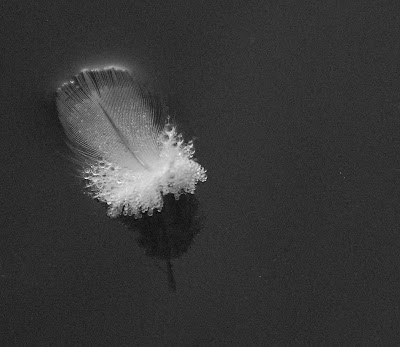 Turns out, after some deep-sea diving into my camera's settings, I discovered the ISO was re-set to 1,250. (I usually have it set between 100-400.) That's when I decided to make lemonade. I would manipulate the photo, and exaggerate the contrast even more, as though I meant to do this. No one will ever know unless they read this blog, or check my behind for footprints where I kicked myself. They'll think it's artistic license. 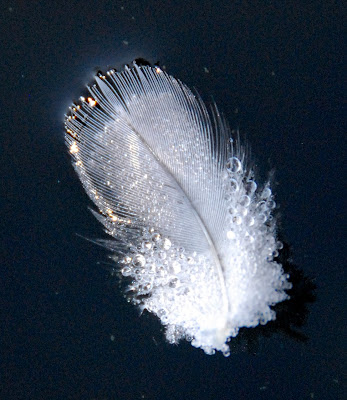 Later that day, I returned to the scene of the crime and found another feather, though it lacked the lovely beads of dew and the water was a lot rougher. This is what the first one was supposed to look like. 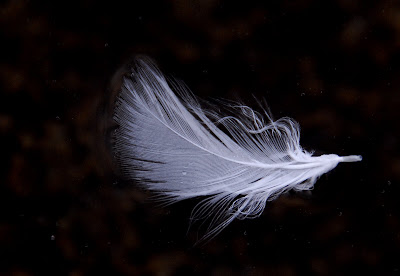 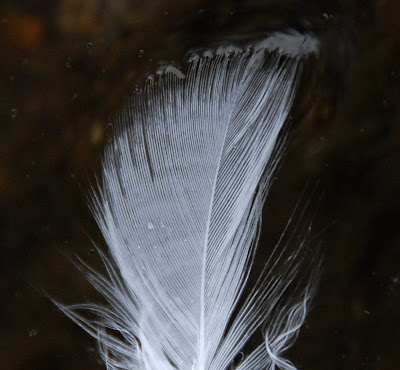 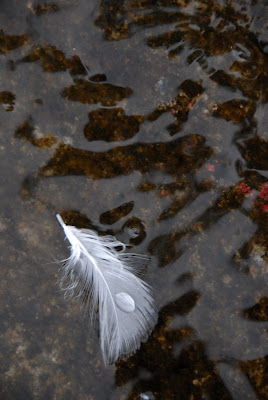 Ah, lesson learned.
Posted by A Novel Woman at 7:12 AM

Lovely photos but I have to say, I really do like the first one the most and had you not said anything, I'd have thought it was art for art's sake and you'd intended it to be that way.

I also really like the last shot, but then, they both convey a totally different feel to me.

Thx, Nightsmusic. I just wish the first set had been more sharp, and then I could have Photoshopped it later. It feels like the one that got away....

Hi Pam: Great photos! I remember when you were hoping to get a new camera, but I can't remember if you ever said what you got? Could you tell me what it is and what lenses you have? How did you make your decision?
Jo

Your latest series of photos is breathtaking! I'm with nightmusic; the first photo is incredibly cool, especially the shadow of the feather.

Jo is right: I think you should have a blog post about what camera you use, why you picked it, how many megapixel, why you think it's so good, etc.

My lap top is now positively ancient (a mere four years!) and I am thinking that some of my pics don't look so good because I am viewing them on an antiquated computer screen.

I have GOT to get one of these.

I've been holding on to my Pentax K1000 for 10 years now, and after seeing these pictures, I must force myself to retire it.

Why didn't I talk to you more this weekend about Photography? (Oh yeah, whirlwind 3 days of biblical proportions!)

Oh, that and the limo was freezing my brain. (g)

I didn't know you were into photography! Yes, I wish we'd talked about it, too. There were a lot of people I missed talking to. The whole weekend went by in a blur. I think I might bring my Nikon next year. I missed it.

I heartily recommend the new DSLRs if you love photography. It will quickly become addictive if you let it.

Considering it's about 15 degrees colder here than in Surrey, no, I haven't warmed up yet! (g)

I majored in Photojournalism in college before switching to Criminology, but Photography has always been a passion for me. I haven't been into it much in the last 10 years, sadly, but it's never far from my mind.

I'd forgotten how much I've missed it. Thank you.

Well, dang girl. You could probably answer more of my questions than the other way around.

You have to come back next year. I'll bring my camera and we can play. Deal?

I didn't understand anything you said.

But the photos are eerily beautiful. You have a gift. _And_ a good camera. (g)