I'm still recovering from The Conference That Is Surrey, and getting back into the usual routine, which usually means dealing with shit of some kind or another, and in today's case, I mean that literally. (Yes, I'm aware that's two posts in a row where I've said shit. But there are no two ways about it. I was knee deep in doo doo today.)

As usual, there was a writing metaphor buried in there.

The day began with a brutal wake-up call by our pet-sitter Bill, who was there to return my neurotic dog Buddy. I threw on whatever clothes I could find on the floor and stumbled downstairs. As I attempted to see well enough through bleary eyes to write the kind of fat check that allows Bill to drink a far superior whisky than I'll ever hope to afford, I was accompanied by an unmistakable keening at my feet, rising from an ungrateful mutt who would have wrapped his arms around Bill's legs if only he could figure out how. You see, after a few visits to Bill's dog kennel country dog spa, Buddy now wrestles with a kind of canine existential angst, that being defined as I'm not sure I exist and I don't think deep thoughts, but unlike you, my stupid owner, Bill feeds me real stew and lets me sleep in his bed nestled under his armpit every night, so I know with absolute conviction that you no longer exist.

While Buddy moped, I wrestled four snow tires out of the shed and into the back of my car. This meant rolling them through the back yard, along the side of the house and then hoisting them into the trunk. Yes, I too think this is a job for a man, but my man forgot. And the other man of the house, my son, is not reliable and liable to cause more damage than not when it comes to placing tires in the trunk.

So while in the process of rolling the tires across the backyard, I discovered that Buddy had dropped a few more little bombs, camouflaged by fallen leaves. All the rest of his digestive detritus had been scooped and disposed of in the proper way (i.e., lobbed over the fence into the neighbour's yard, a tit for tat sort of gesture as the neighbour's dog frequently runs loose and leaves gifts for us. It's like a cookie exchange, only with dog shit.) The end result? I ended up with dog crap lodged in the treads of my tires which I had to pry out with a stick before I could stack the tires in the car. (Ironically, the tires now on the car have virtually no tread left and would have been a whole lot easier to clean.)

What does this have to do with writing, you're thinking. You said there was a metaphor. 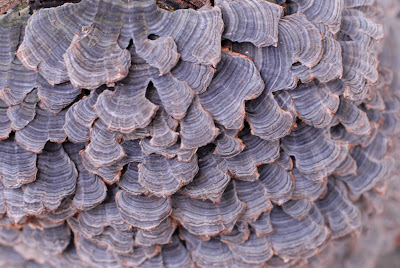 Sometimes we have to wade through a lot of shit before we stumble across something beautiful.

Keep your eyes open to the possibilities.

Mind you, if I'd really kept my eyes open, I would have seen that wolf spider the size of a grape rappelling down to my head as I made faces at Buddy in the window.

My screams still echo down the street.
Posted by A Novel Woman at 1:21 PM

I hear your metaphor. Walking into our houseyard is a minefield of gigantic doggy-dunnit. My father fails to be amused on a daily basis. Great Dane poops - one could 'do' your whole set of tyres!!!
:-)
BB
PS Loved the fungus foto!

You know...Buddy kind of sounds like a cat. Some curious inbreeding? The product of a sordid affair? The Enquirer is on is enroute.

Thanks for the morning laugh!

Great post, comme d'habitude. Also, don't forget - if it's shit it's not OUR fault, it's the fault of our stupid muse who is hungover or spacing out once again. I'm all for shifitng the blame. All we have to do is show up.

You have made me laugh my butt off twice in one day! This story is so funny you should have it published.