Duke Kahanamoku, the Father of Surfing and Hawaiian Hero 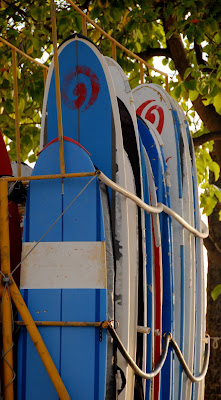 Confession: I was an ignoramus about Hawaiian culture before I visited Oahu. I thought it was one big beach party, like Miami, just sun and fun and not much more.

I knew about Captain Cook who landed, named the islands The Sandwich Islands, and a year later got a splitting headache on the beach via an axe held by a native Hawaiian.

I also knew that the islands were originally populated by Polynesians over 1500 years ago, who paddled over 2,000 miles in canoes, guided mainly by the stars.

What I didn't know was that back in 1810, all of Hawaii's islands were united under one royal kingdom and an official royal family recognized the world over. (Trivia: in 1886, the Iolani Palace on Oahu became the first royal residence in the world to be lit by electricity. Cool beans, no?) 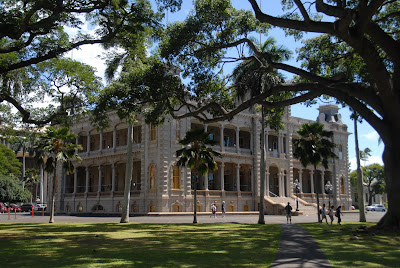 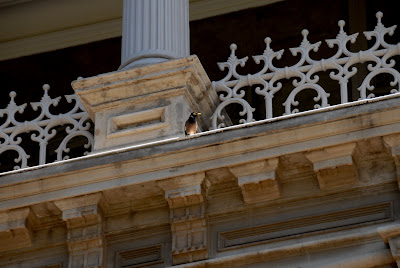 Anyway, back around 1820 or so, the Protestant missionaries arrived, and while I'm sure they believed their intentions were good, they did their honest best to obliterate the Hawaiian culture. They preached against surfing, riding, and most importantly, hula dancing and singing (which was how Hawaiians passed on their history to successive generations.) 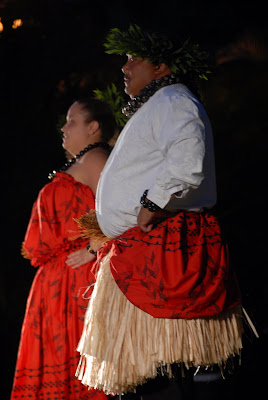 Sugar and pineapple plantations were established, and the owners brought Japanese, Portuguese, Filipino and Chinese over to work the fields as cheap labour. Very quickly, big business in Hawaii was controlled by former missionary families, specifically five families. Known as The Big Five, they held the entire economy of Hawaii in their tight little fists - banking, importing, shipping, warehousing, labour - and thus an oligarchy was born.

It was this group of businessmen/former missionaries that was behind the overthrow of the royal family and who forced the last Queen, Liliuokalani, to surrender her kingdom to the United States. She was placed under house arrest in her own home, the Iolani Palace, before Hawaii was annexed to the U.S. in 1898. Hawaii became the 50th state in 1959. Once Hawaii became a state and workers were no longer treated like indenture servants, sugar and pineapples for huge profits was no longer viable.

But what about surfing, I can hear you saying. You were going to talk about surfing. What's this got to do with surfing? 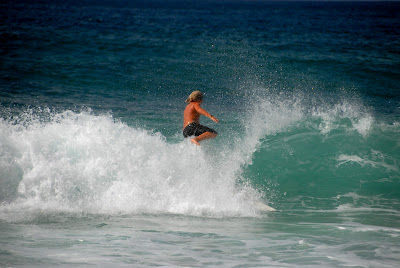 Well, I was also ignorant about the history and tradition of surfing. I thought it was just another water sport by lazy pot-addled dudes who soaked up the sun and played in the water. That's what the missionaries thought too. Turns out surfing is rooted in tradition and linked to ancient Hawaiian royalty. Surfing was part of the Kapu system of laws which held that royals or chiefs called "alii" were above commoners, and they used this sport to assert their command over their people by demonstrating their strength and agility on the surf board. 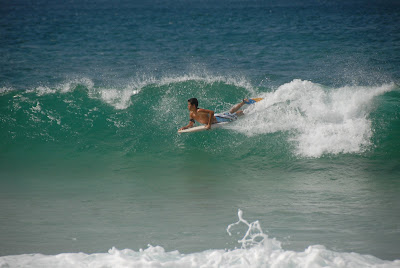 The surf boards themselves were sacred, and the status of the rider determined the type of wood used and the size and weight of the board. The best wood was reserved for the chiefs. Once a tree was selected by a master craftsman, a prayer was recited and a sacred fish called a kumu was placed at its roots. Then the tree was cut, hauled away and carved into a board. (You can still watch modern surfers make boards.) 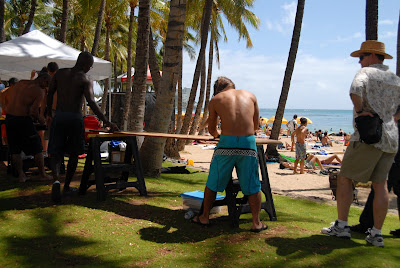 Once the general shape and size was established, it was taken to a canoe house or halau to be smoothed with coral stones. A dark stain was applied, then kukui nut oils to make the board shiny and glossy. Before its first dip into the sea, it was dedicated and blessed. After each use, it was rubbed with coconut oil and wrapped in tapa cloth to protect it. (Unlike modern surfers who tuck it under one arm like a briefcase and wrestle it into the hotel elevator. I saw that more than once.) 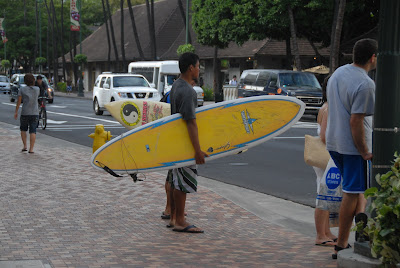 The surfboard was a revered part of Hawaiian culture, and remained so until those pesky missionaries arrived and pursed their lips. They believed it was hedonistic and a huge waste of time and they strongly condemned it. It was the last reigning Hawaiian king David Kalakau, a huge sports enthusiast and father of the Hawaiian renaissance, who fought against decades of suppression and kept the tradition going. He brought hula and surfing back from the edge of extinction (and yes, I don't use that word lightly.) Many Hawaiians believe that without him, there would be no surfing today. 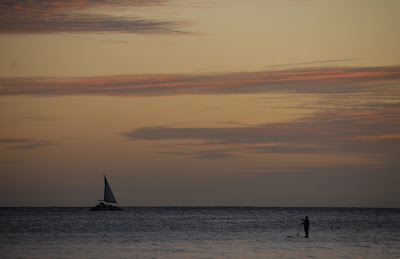 In 1905 the missionaries began to lose their grip on the community, and a teenage boy named Duke Kahanamoku and his buddies met up at Waikiki Beach and formed a canoe and surfing club called "The Club Of The Waves". Known as The Renaissance Man of the Sea, he revived the old traditions and introduced surfing to the rest of the world like California, Australia, and New Zealand. He is credited with doing the longest ride on a monster wave, a journey of 1 1/8th mile on a 30 foot swell named Bluebird, right up to Waikiki beach. He won three gold and two silver medals in four Olympic games."Try meeting or leaving people with aloha, you'll be surprised by their reaction. I believe it and it is my creed. Aloha to you." Duke Paoa KahanamokuWe spent two evenings at his open air bar and restaurant called Duke's, on the original site of Duke's Outrigger Canoe Club. (Those are the photos I posted a few days ago with my tropical drinks in hand.) 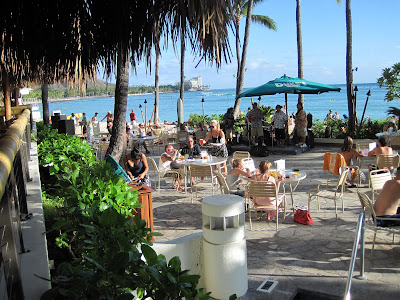 His surf boards and photos line the walls. It's a huge tourist attraction, but it's also one of the best places in town for a meal. We befriended our young server named Young John (we never met the unfortunately named Old John) and talked about his future plans to take a master's degree in kinesiology and Doug gave him some good advice. A few days later, we had dinner there again, and John not only remembered us, he sent over a Hula Pie - ice cream, macadamia nut, fudge sauce the size of my head - and gave us all hugs goodbye.

Have a look at this video and tell me this isn't awe inspiring.

I love history, (as you know), so combining it with sunshine and fun was just the ticket. Think PBS has an American Experience show on the last Queen, which is truly heartbreaking.

It's still very raw for many Hawaiians. I just had no idea....

I'll have to see if I can find that PBS special. Thanks dahling!

There was an amazing doco on our television a few months ago about the history of surfing in Australia (have to try and dig out the name - it was fantastic) which was the first I had ever heard of Duke Kahanamoku - thanks for the added information.

I enjoyed your post. What I always got a kick out of is the Hawaiian names. Your first instinct is to say, "No idea how to pronounce that one," but then if you try, it rolls off your tongue easily. Kahanamoku....Polumalu...Liliokalani...ooh...I think I just felt a Hawaiian breeze.

Jeanie, let me know if you find the name of the doc.

And Debby, at first the names baffled me, all k's and vowels, but soon we got it! Lots of huffing sounds, but we got it.

Found it - Bombora - The Story of Australian Surfing!!

Jeanie, you're a peach! Now I know what to get my husband for Christmas. Doug, if you're reading this, stop reading right now!

You know that old song "Brandy"? It goes, "Brandy, you're a fine girl, what a good wife you would be. But my life, my lover, my lady is the sea." I believe Brandy works here. No reason, I just do. And that song happens to be a guilty pleasure of mine, so that's a plus in my book. You can simply waltz over to this colorful and warm establishment, enjoy some drinks with friends, and walk home. The bar is right at the center, so you can walk to either side for drinks, and the bartenders are friendly and at your service. There is a variety of seating, good music, and friendly neighborhood people to make your time more enjoyable. Not pretentious, very cozy, I think Point Break is a fabulous place to spend some time with friends