I've been getting some mild flak from some readers over my absence.

These are people who clearly have never moved, nor have they purged and packed twenty-four years worth of crap treasured family heirlooms in a matter of days. We sold our house in eight days, then my husband said, on a Wednesday, "let's move on Saturday." And we did. And we survived. Just.

And while I know my eensy little blog is not making huge waves in the web 'verse, I know from your emails that you do miss it, and I appreciate your patience. I'm back now. Soon there will be exciting new photos of my new Montreal neighbourhood. Buddy and I have been exploring and there is all kinds of awesome just around the corner, both figuratively and literally.

For now, let me share our little adventure with you.


Lifestyle gurus call it downsizing, but that word is too uninspired to describe what we did. In essence, we said goodbye to our suburban home in exchange for a city pad and all that it entails.  It wasn’t an easy decision. We lived in our house almost 25 years. My eldest daughter was a toddler and I was heavily pregnant with our son when we moved in, and a third child was born before we could say Bob’s Your Uncle And Maybe He Babysits. (Or in our case, Happy 5th Anniversary!) In that time, it transformed from house to home, right down to a penciled wall of names, dates and growth spurts. 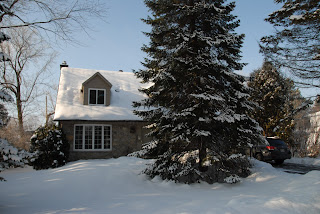 That little stone house was only supposed to be our starter home. It was quite modest, with a tiny yard and a one-car garage that has never actually held a car. Most importantly, it only had one, full bathroom. But we came to love it, and decided to stay, a decision we never regretted. Okay, maybe we questioned it with three teenagers and that single bathroom. But our kids learned some valuable lessons along the way, like cooperation through example. More or less. 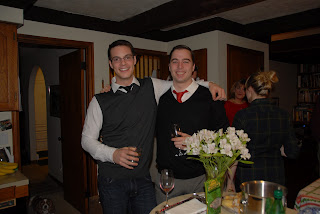 Some of our holiday rituals were tied to the house. Every Christmas morning, my children waited for each other at the top of the stairs until my husband and I staggered to the bottom looking for coffee and a camera, in that order. They sat side by side and slid down each stair together, creeping ever closer to Santa’s bounty while we snapped photos. Even when they hit their twenties, they still squeezed together shoulder to shoulder, a solid block of squirming siblings with bed head, moaning about needing caffeine.  It was a bittersweet moment when we all realized that 2011 was the last time we would do this, unless they decide they want to shimmy across the floor in our new flat or move the process outside to the front steps of the building. 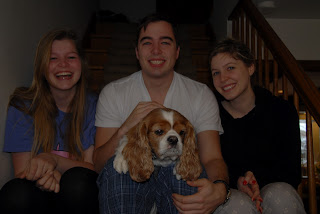 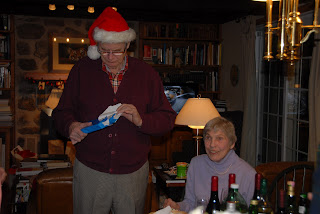 Those walls held our stories, from skunks under the porch and raccoons playing with sheets on my laundry line, to ice storms, burst pipes, and the morning mom slept in and the kids played zoo using the ash-filled fireplace as a cage. There have been memorable birthday parties, including one where wee guests stood timidly in party dresses and braids on our back deck as I handed them loaded water pistols. See the dad on the lawn right there below you?  I explained it was okay, nay encouraged, to let loose and blast that dad, really blast him with cold water.  And just like that, they morphed into GI Janes and bombarded my husband as he raced back and forth like a cornered rabbit. Themed parties may be de rigueur, but these tiny warrior princesses declared this one the best one ever.

My husband once hosted a stag in our home for his younger brother. I was escorted out the front door with a toddler on each hip and returned to what can only be described as bacchanalian carnage. There were hamburger buns glued to the wall with condiments, male bodies strewn on the floor like pick-up sticks, and the family goldfish flopped around in a mug of beer. The fish recovered quickly, but it was touch-and-go for my husband.

The kids grew into teenagers and invited friends over to hang out in the basement to play video games or as in the case of my eldest daughter, drink Cosmos and hold Sex And The City marathons while they discussed their own dating foibles. Oh, if walls could talk, I’m sure ours would stammer and blush.

As I sorted through immense piles of stuff, I came to regret how casually I tossed it all in cupboards thinking I’d deal with it later. Later arrived, and while the task felt Sisyphean in scope, I made slow progress. The piano sold, the drum set too, off to torture entertain new victims another family. As I went through it I was overwhelmed emotionally; it’s not a cliché to say life flies past at lightening speed. Those school essays, travel photos, hand-painted cards, handmade Hallowe’en costumes for tiny people in innocent times, they all mocked me, and whispered, where did the time go? 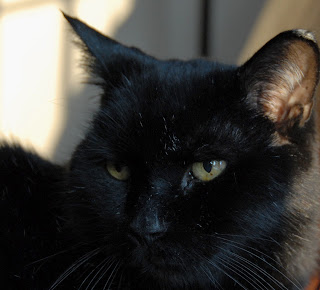 And as I dug through a drawer in the kitchen, that ubiquitous one that holds pizza folders, twist ties and old pens, I found a small business card at the bottom. It had a simple message, nothing more than this:

“Faith is the Beginning and Love is the End.”

I realized that it was faith which brought us to that house as a growing family; faith that we would be happy there, and raise good kids who would become conscientious adults, faith in each other, that our marriage would be strong and withstand the storms like our little stone house has done.

What we have left in the end, just as we had in the beginning, is love. Well, love, and a whole lot of boxes.

Technically we may have downsized, but the opposite of downsize is expand. In physics, to expand means the universe is undergoing continuous change, opening up, increasing in scope.

Seems that’s a better word for what we’re doing.

We are expanding our lives, our choices, and by extension, ourselves.

But I will miss that little stone house.
Posted by A Novel Woman at 3:29 PM

Aw, now you have me teary-eyed. Beautifully expressed!

Tears here too. But oh, what new adventures await!

No tears, Linda Gee. You have wonderful things to celebrate!! Congrats, girl. You worked hard for this.

But I totally understood.

Reading your eensy little blog is a delight for me, thousands of miles away from you. I´m always willing to read new posts. So please, even if you are very busy moving house, don't let your readers down. I'm sure you will miss that house with all those memories. I don't know if I would be able to do the same.
A Spanish reader...

Ah, thank you! More to come, I promise.