Aloha! We're back home from what can only be called a mixed-bag of a vacation. It had a bit of everything - palm trees, ocean, great food, tsunami, murder...wha-at? Yes, all will be revealed this week in a series on our first trip to Hawaii.

And coincidentally, this is my 300th post. Who knew I had that much to say? Okay, probably everyone who knows me even slightly, but still I was surprised. 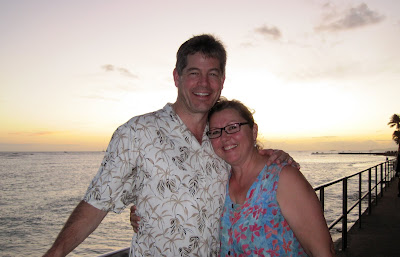 This has been the first time Doug and I have taken this sort of holiday together. (Look how miserable we are.) Actually, on the very few vacations we've taken without the kids, we've always gone to cities - London, Paris or New York, for example. Vacations with the kids usually meant camping.

I wasn't sure this beach thing would be for me. I get bored easily, and although I love the water and swimming, I prefer a lake over an ocean. The ocean and all it contains pretty much scares me silly and I don't like being in the sun for very long. Also, as a middle-aged, hormonally challenged, zaftig sort of woman with frizzy hair, heat and humidity are Not My Friends. But Doug was honoured with a fellowship in the American College of Dentists which meant attendance at the ADA conference in Waikiki. Seeing as I was looking into the gaping maw of yet another Canadian winter, a week in Hawaii was an offer I couldn't refuse.

We stepped off the plane into a wall of hot, moist air, fragrant with flowers and alive with birds flitting about. In the airport. 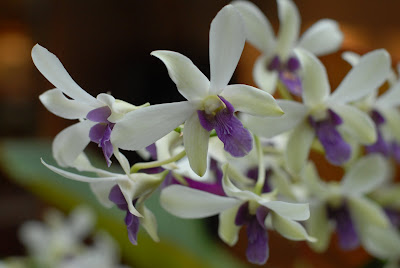 We soon realized that many public buildings in Hawaii, like stores and hotels and airports, have no walls or doors, even when they're air-conditioned. Since the weather is pretty much always 88F (31C) and sunny, why bother with things like walls? One of the most beautiful gardens I would encounter was right there at the airport. If you look closely at the corridor on the back left side, you'll see our jet. Right behind the Japanese, Chinese and Hawaiian gardens in the centre of the airport. 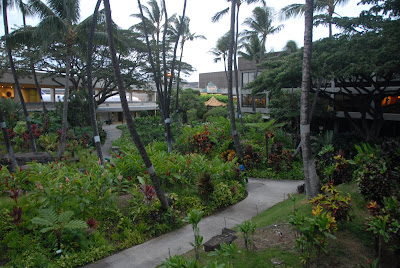 We hoofed it to our hotel via taxi, and it turns out our taxi driver was from Montreal! She said she missed the change in seasons, the fireworks competiton and the bagels equally, then gave us a few pro tips like "never jaywalk or you'll get a $200 ticket" knowing as she did that Montrealers jaywalk as naturally as they breathe. We checked in and hit the infinity pool at the hotel.

There's me, and right behind me, infinity. And beyond. 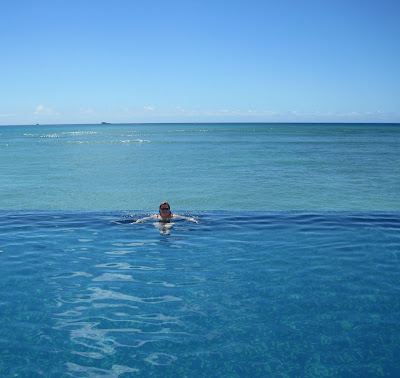 The good part was that it was an infinity pool overlooking the ocean. The bad part was that construction was still ongoing right beside the pool, so it was noisy. The good part was that it had pool boys who wandered by with offers to spritz your face with water and provided tropical drinks whenever you raised the little orange flag on the back of the deckchair. I'm going to install one of those flags on my deckchair at the cottage. We grabbed our new underwater camera to give it a test drive, and behaved like three-year-olds. 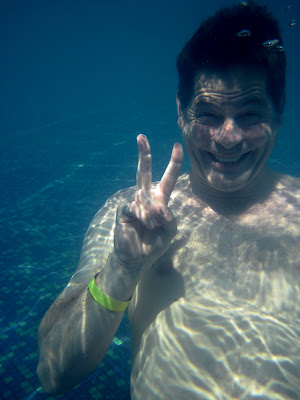 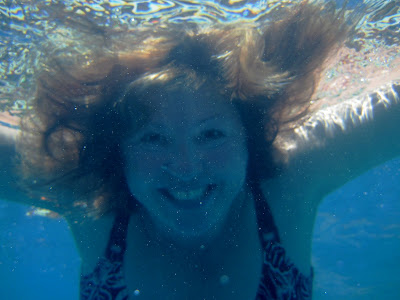 Then we hit the wide open sea. 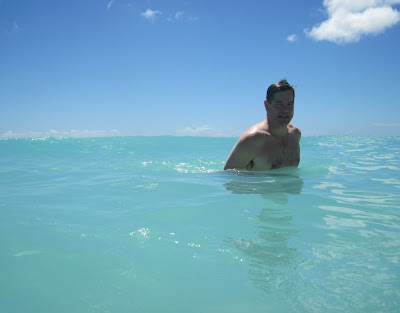 I stepped on what I thought were rocks in the sand. It wasn't until I put on my mask and snorkel that I realized what I was stepping on coral. And sea cucumbers. And sea urchins. But for that moment, I was blissfully unaware and carefree and giddy from the fact that salt water + pudgy = ridiculously buoyant. Unless I filled my bathing suit with rocks, I wasn't going down, baby.

The surfers were out 24/7, and I mean that literally. When I woke at 5 a.m., they were out. When I went to bed, they were out. The bellhop said they even surfed all through the night when there was a full moon. 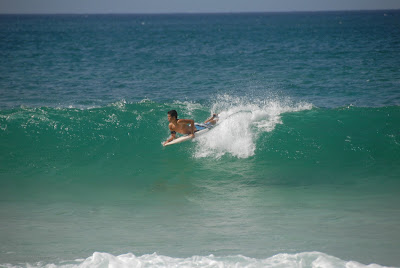 However, about a week after the full moon, the jellyfish arrive and there are jellyfish warnings posted on the beach. Good tip if you're planning a holiday. (Shudder) You want to avoid the jellies, man. (Double shudder)

And thus endeth the first day. 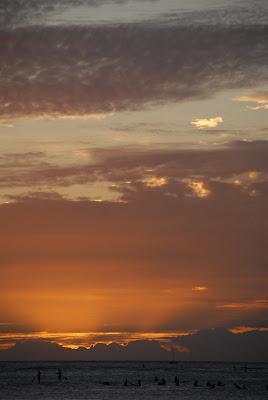 So glad to have you back and eager to hear about tusnami and murder in Hawaii...like an episode of Hawaii 5-0!

I'm so glad you two got away after successfully launching the last of your 3 birdies from the nest. It is important to have rituals to mark those sort of rites of passage.

You are coming to SIWC, aren't you? I cannot WAIT to catch up there. Aloha ma cherie!

That was fab Pam... great commentary and pics! (Specially the underwater ones - fun!).

A little disappointed that we got you as far as Hawaii and you didn't just keep on coming - you were halfway to Australia!!!
:-)
BB

Oh Laura, my eldest birdie has come back to the nest for now, so we're not entirely alone. But she's fun to have around and she's been working for her dad, so it's all good. And YES YES YES, I'll be at the conference in 15 sleeps from now!!

BB, I met enough Aussies in Hawaii to qualify as a visit to your country! Most poured off the cruise ships and sounded like Michael Caton's character in THE CASTLE. ;)

I love that underwater pic of you!

You both look so happy and laid back.....I guess you need to travel thousands of miles from the office in order for Doug to relax. Which means.....you'll have to do this every year!

Thx, Brinkydink! My girlfriend liked it too, and said I looked about 12 yrs old!

Yutha, from your lips to Doug's ears. That's how the expression goes, right?

You do look like you had a good time! Doug, this girl of yours needs regular trips to Hawaii.

Finally remember my password so I could get back on here.

Your pics are fabulous, as always. I adore the one of you underwater. You have that joyous expression that we only seem to have when we are little kids. We should all go underwater to experience such fun!

OMGosh--my word verification is "rechingr." Is that the thing you do when you get stinko and start slurring your words and have to find a bathroom and when you get back they ask you what you were doing and you say "I was reching....r?"

You slay me, girl. Rechingr is something I remember vividly. (g)